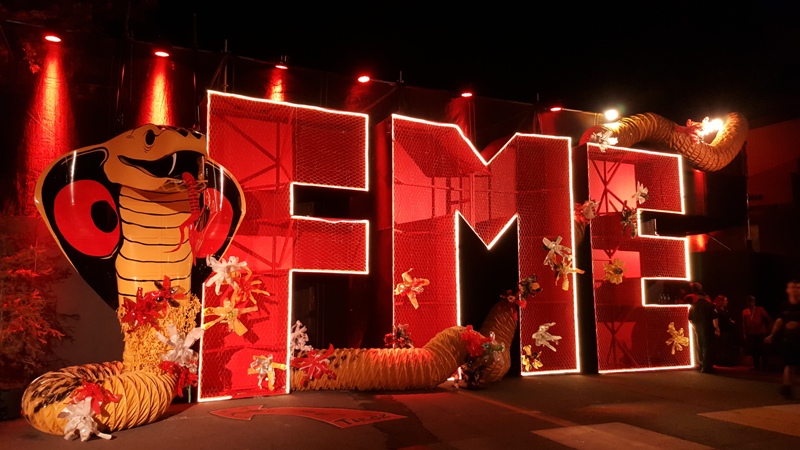 Rouyn-Noranda’s Emerging Music Festival is a wrap for another year, and the 2015 edition (Sept. 3-6) was big and loud and hot — the heat wave you felt in Montreal extended 750 kilometres northwest to the small mining town, where the installation of air conditioning in concert venues is only beginning.

The population of Rouyn-Noranda is a shade over 40,000 people, but FME is hardly a small-town music festival. Every year, pop, rock, punk, metal, electronic and country bands from Canada, the U.S. and France converge to showcase their sound for the locals and a few dozen media and industry delegates, most of whom are flown in and accommodated on the FME dime — this year there were reporters from England and France in the mix, so you can imagine the budget they’re working with (courtesy of the Quebec government and the major sponsor, my former corporate overlords Québecor).

The line-up at FME 2015 was impressive given the quality of the acts but also for its sheer diversity: there were American indie rock/pop acts Deerhoof, the Dodos and Crushed Out, French DJs Pandagraham and Molly and Italian death metal band Fleshgod Apocalypse — who I found myself eating dinner next to one night (their Italian banter drowned out the franglais chatter in the room, as I imagine their Cookie Monster singing would) — along with a handful of acts from the Abitibi-Témiscamingue region, such as electro-twee duo Geneviève et Matthieu, hard rockers Nanochrome and metal bros Abitabyss. 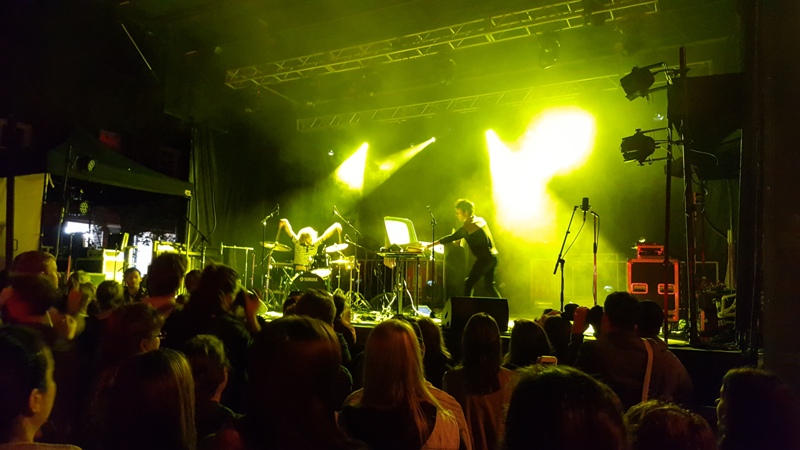 But the majority of bands booked at FME every year come from Montreal, and this year’s edition opened with a threefer. A killer set by Doldrums — aka Toronto transplant Airick Woodhead, with Karneef on drums — was sandwiched between Syzzors and headliner Ariane Moffatt, but it was Doldrums who stole the show, playing material from his latest record The Air Conditioned Nightmare with a harder, psych edge, impressively calling in ghosts from the alt apex of the ’90s without feeling dated at all. It was a surprisingly physical set too, with a complementary light show that seemed to really seal the deal for the onlookers amassed at the festival’s big outdoor stage, most of whom were probably experiencing Doldrums for the first time. 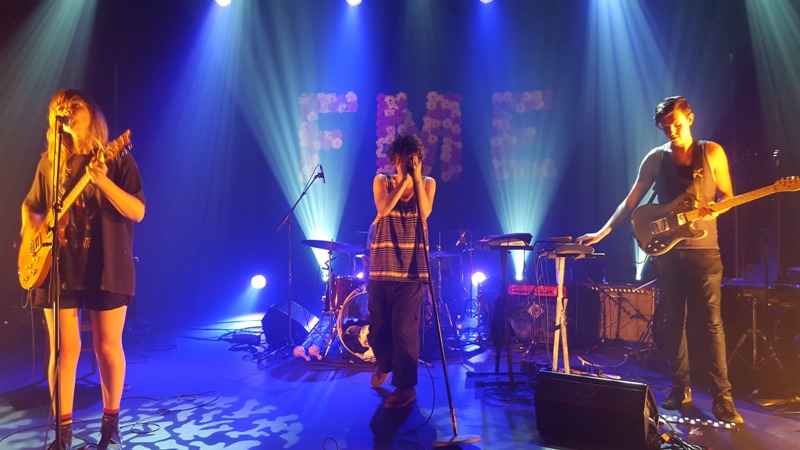 The next night, Woodhead’s brother Daniel Benjamin brought Moon King to the stage at Agora des Arts, a converted church that houses many of FME’s big shows. As the evening’s sweat act, they launched their set to a seated audience, successfully urging them to stand (for a while) and drink in their melodic take on ’90s indie rock. From the shoegazey grinders to the slow “bummer” jams, Benjamin and his bandmate Maddy Wilde traded lead vocals and harmonized— his slack croon and her Cyndi Lauper-esque punk yelp are a nice match.

Earlier on FME’s second day, singer-songwriter Safia Nolin played an acoustic duo set at the annual afternoon house party thrown by Montreal label/publicists Bonsound. It’s the first time I’d seen her since she opened Cult MTL‘s second anniversary BBQ in July 2014, and her folk intimations continue to grab at the heart and the mind. 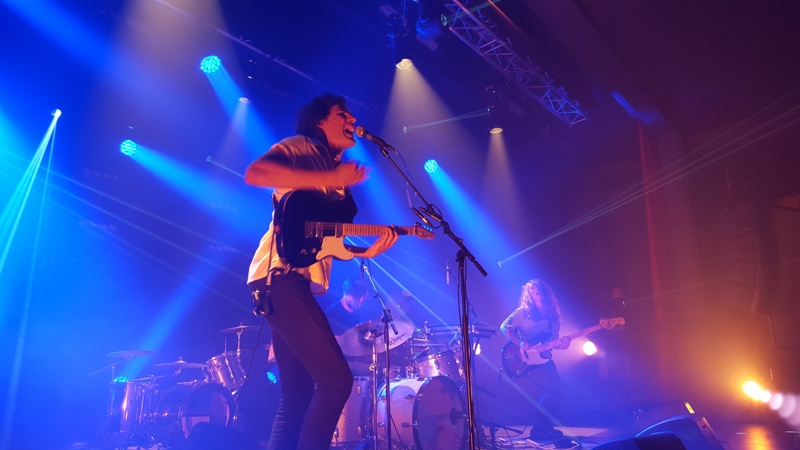 We ended the night at le Petit Théatre du Vieux Noranda, an old (allegedly haunted) venue that was renovated and outfitted with great sound and lights in recent years, kind of like le Fairmount here in Montreal. We walked in on the intensity of Ponctuation, a melodic, motorik blender of post-punk and psych care of Quebec City brothers Guillaume and Maxime Chiasson, with an additional guitarist in tow. 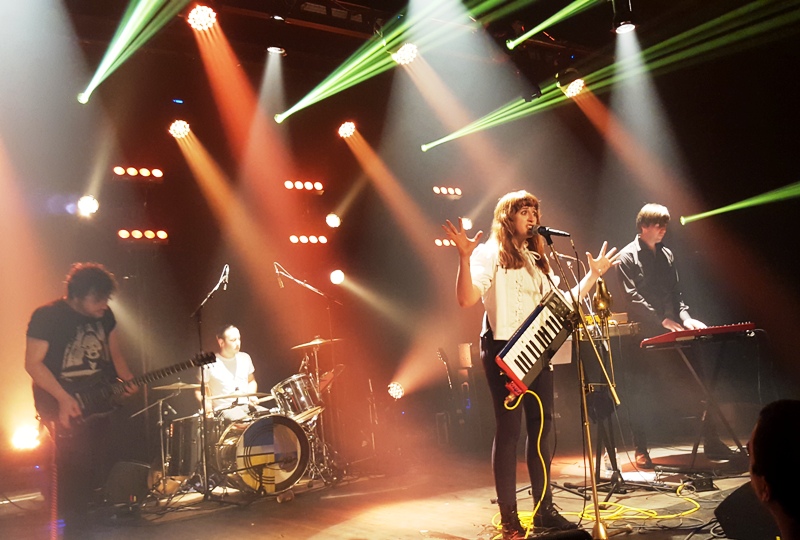 The night’s headliner was Montreal synth-punk band Duchess Says, who I haven’t seen live in years. Luckily, little has changed — their laser-guided sonic beatdown is transformed into spectacle via the anarchic glee of frontwoman Annie-Claude, whose crazy eyes, manic hands and crowd-surfing (when she’s not playing a keytar) make it pretty much impossible to look away. I spent part of the set dealing with a huge roll of fabric that she threw to the crowd, helping to keep it aloft and unfurled, but it was a nice change from the norm (unless the norm is a Rich Aucoin show — he had rolled out his parachute in the same venue two years earlier), and luckily my hands were done with beer for the night. 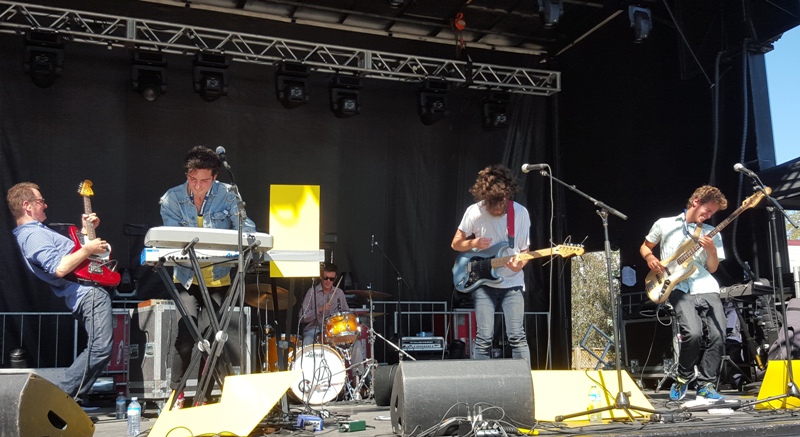 Day three of FME began with an early afternoon set by Montreal electro-rock four-piece Look Vibrant, who we’d last seen playing as a duo at our BBQ party in July. Based on their recordings alone, I’d file these guys under “indie pop,” as broad and vague as that catch-a-lot descriptor is, but live they stretch their songs and bear down on their instruments, creating nice little noise-barrage codas. The two-year-old band has a good number of tight songs to their name, and yet a highlight of the set was a cover of Kate Bush’s “Hounds of Love,” a brave choice for the band’s lead singer, one that he seemed to pull off pretty easily.

A few hours later, Tomas Furey closed his 5à7 set with another cover, a haunting rendition of “Wild Is the Wind” by Johnny Mathis (further popularized by Nina Simone and David Bowie). His singer-songwriter stylings are bolstered by a deep, dark synth buzz, but even when he strips it down to voice and electric guitar, his vibe is refreshingly Black Lodge. (Incidentally, Tomas is the son of composer Lewis Furey and actress/musician Carole Laure.) 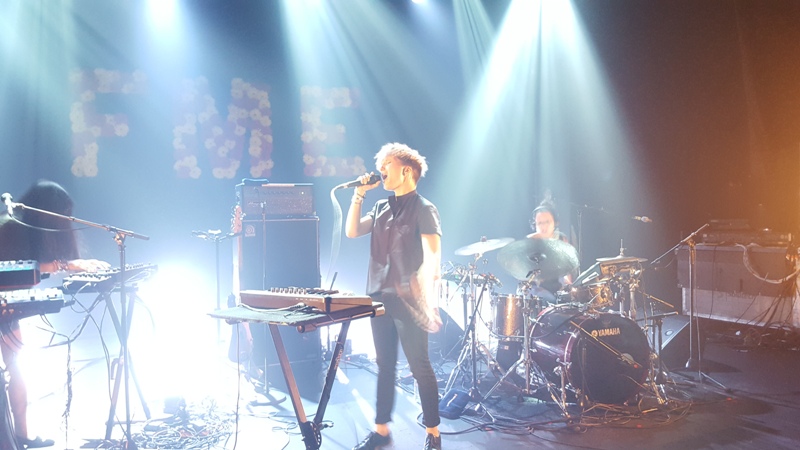 That night, French singer and electro-rockeuse Jeanne Added — who released a record called Be Sensational this summer — played a set that pounded hard and amped up emotions simultaneously, getting the sweaty crowd at Agora up and banging like no other act I saw this year. I really regret missing the first half of her show but still feel lucky to have witnessed any of it. 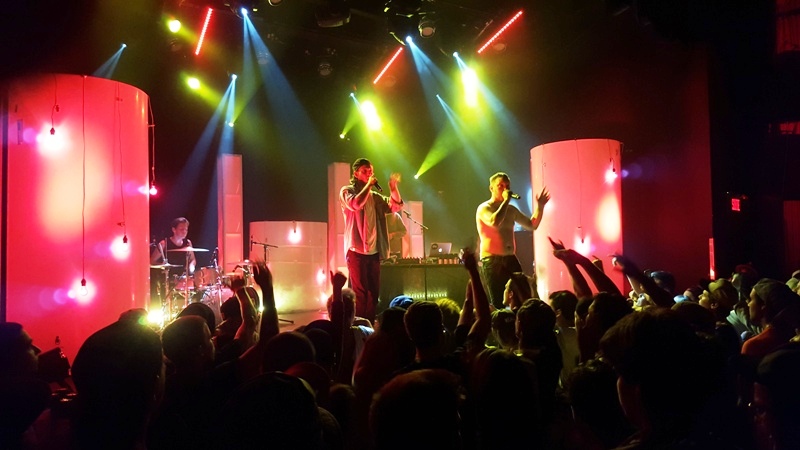 Then we crossed the town (a 12-minute walk) to the Paramount, the former movie theatre that seems to be the festival’s regular hip hop spot. The show started with bilingual Montreal crew Opulence Family, whose classic rap sound surprised me, creating continuity with the music from Straight Outta Compton that was still bouncing around my head since I’d seen it earlier. Headliner Loud Lary Ajust brought down the house, dad bods and all, whipping up the mostly local, super-hyped crowd till they ate up every rhyme and even spat a few back on command. Hot shit.

The night ended with a rousing set by NYC lifers the Fleshtones, who’ve been making a garagey racket since 1976. They’re grey-haired and a bit battle-scarred, but this was no reunion tour hackery — these guys have kept it together all this time, playing sets that deliver a vintage rock ‘n’ roll vibe with a punk rock thrust. They play Montreal pretty regularly — go check em out next time they’re here.

The final day of the festival was light on regular programming but loaded with surprise performances, which had been popping up in parking lots and storefronts and in front of the FME gate to 7th Avenue throughout the festival. 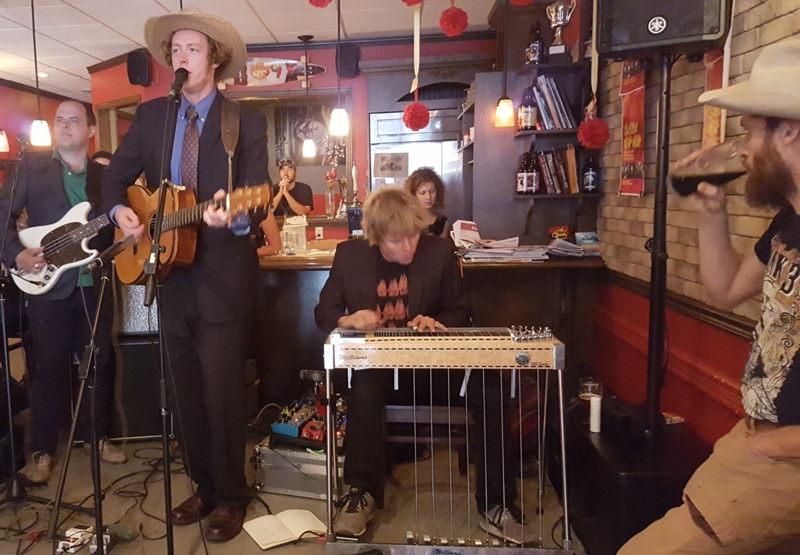 Each evening there were three 5à7 shows happening at once at venues practically next door to each other on rue Principale. I took my last chance to catch a mini-residency by Montreal country crooner Li’l Andy, singing and playing acoustic and electric guitars alongside Joe Grass on pedal steel and Kurt Chaboyer on bass. Aside from uptempo foot-stomper “Beggin’ and Achin’ for Eggs and Bacon,” Li’l Andy (whose grandparents hail from Rouyn and worked in the hulking mine that’s often on the horizon) played material that’s melancholic and sometimes a little spooky, so much so that a cover of Hank Williams’ “Ramblin’ Man” slid into the set seamlessly. This is — excuse me — the good country music, and seeing a show like this is an antidote to the garbage that passes for country in the U.S. right now — mercifully that stuff is very easy to ignore above the 49th parallel.

Before Kid Koala officially closed FME 2015 with a party at the Paramount, fellow Montrealers Seoul played a set for some hard-earned love and money at Agora — they told the audience how they’d travelled 35 hours to be there, flying from DR to White Plains, NY, then driving straight to Rouyn on no sleep. Despite the conditions, Seoul (with How Sad frontman Harris Shper rocking the soundboard like a party DJ) played it fun and physical. The dark undercurrent of their latest record I Become a Shade was diminished live, opening up an invitation into their world, which is really what showcasing at FME is all about. Music emerging and merging with you. ■