Pretty much all of the New Hollywood directors flamed out dramatically at some point in their career (with Scorsese and perhaps de Palma as exceptions). Peter Bogdanovich has the dubious honour of flaming out at least three times.

Bogdanovich continually squandered any goodwill a hit film would bring him by indulging in his love for classic Hollywood screwball comedies and musicals through films that were almost exclusively total bombs. This left him as somewhat of a pariah since the early ’90s; even though he’s well-respected as a film historian, actor (that’s him as Dr. Kupferberg on The Sopranos) and wearer of ascots, he’s only made one theatrically released film in the last 22 years — he spent the majority of the ’90s and early 2000s making dubious TV movies with titles like A Saintly Switch and To Sir With Love II.

The current filmmaking landscape is unkind to small movies and uncommercial prospects, but it’s been more than kind to second (or third, or fourth, or fifth) chances. The world loves a good comeback story, and it’s probably no surprise that this comeback story comes with producer credits from both Noah Baumbach and Wes Anderson. She’s Funny That Way is Bogdanovich operating in full-on screwball farce mode — he may be trading telegrams for text messages, but this is exactly Bogdanovich indulging his lifelong obsessions. 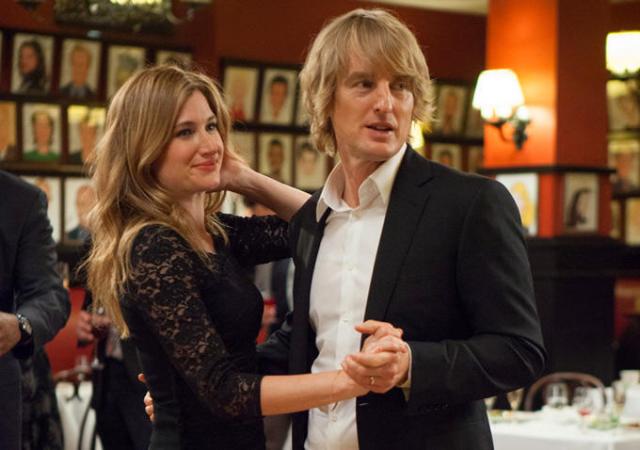 An aspiring actress by day, Izzy Finkelstein (Imogen Poots) moonlights as a call-girl with the name of Glowstick. Theatre director Arnold (Owen Wilson) comes to New York to direct a Broadway play starring his wife Delta (Kathryn Hahn) and British A-lister Seth Gilbert (Rhys ifans); he’s got some downtime, so he decides to hire an escort who turns out to be Izzy. This complicates things when Izzy shows up the next day to read for the play and knocks it out of the park, much to the delight of Delta and Josh, the playwright (Will Forte) and the mortified panic of Arnold. Josh becomes smitten with Izzy, which complicates things with his high-strung therapist girlfriend (Jennifer Aniston) – who also happens to be therapist to both Izzy and an elderly judge (Austin Pendleton) obsessed with the character of Glowstick.

Needless to say it’s a lot of door-slamming farce, miscommunications, people getting caught red-handed and yelling. Bogdanovich has proved that he can do this kind of amped-up Lubitschian comedy time and time again (most explicitly in his adaptation of the play Noises Off! in 1992) but it’s not exactly a comedic tone that has aged like fine wine. It’s upbeat and pleasant enough to sustain a full feature, but it’s also kind of one-note and strident. Clearly working with a limited budget (about 80 per cent of the film is either set on a theatre stage or in hotel rooms), Bogdanovich makes the most of his limitations but there aren’t too many ways to reinvent the wheel available here.

Filling the cast with a such a murderer’s row of talented comedic performers (there are also cameos from Richard Lewis, Michael Shannon, Lucy Punch, Illeana Douglas and Bogdanovich regulars Colleen Camp, Tatum O’Neal and Cybill Shepherd) was really the best move Bogdanovich could’ve made. Aniston is particularly fun as the world’s most aggressive and judgmental therapist, but the majority of She’s Funny That Way feels too self-consciously reverent to both the classic films that inspired it and the previous Bogdanovich films. It’s a fun little rainy-day trifle, but it’s got “Are you kidding? If Peter Bogdanovich called, I would say yes in a second! I love Paper Moon!” written all over it. ■