[vc_row][vc_column][vc_column_text]Walking through the Plateau or Mile End, you’re bound to come face to face with a Waxhead creation. Dwelling in back alleys, sprawled broadly across doors and walls alike, or as a sticker nestled coyly on a mailbox, these quasi-indescribable and boldly coloured creatures could have only sprung from the mind of the Montreal-based artist.

Waxhead created pieces along the Main during the Mural Festival in June, as well as a communal mural off of Mont-Royal Avenue with artists like Dave Todaro, Turtlecaps and Labrona — they affectionately dubbed the piece a “family portrait.” Until Sept.6, his work is being displayed prominently at an exhibition at Mile End gallery and print shop Monastiraki. 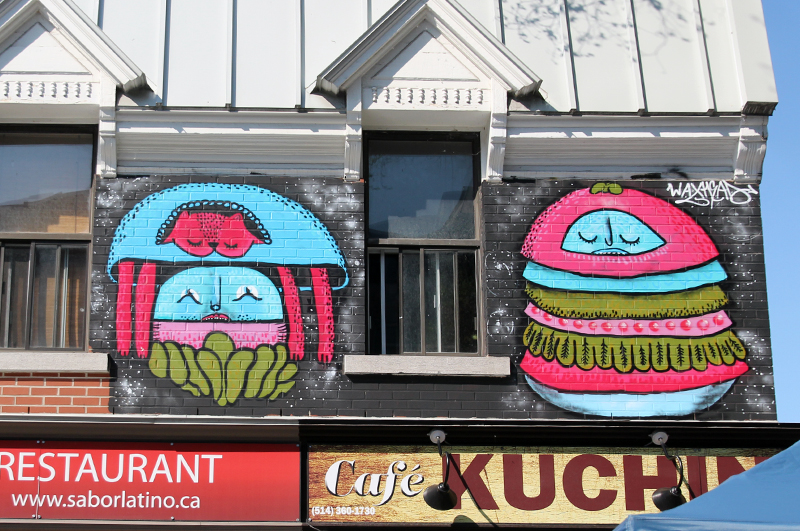 Characterized by erratic faces, melting eyes, loopy noses and vivid colour combinations, Waxhead’s style of painting ultimately gave way to his current moniker, one that he’s been using for nearly a decade now.

“I use the name mostly because I was seeing a lot of the graffiti guys do it,” says the 20-something-year-old artist. “They take a name and it’s kind of mysterious. It’s almost like a superhero, like an alter-ego.”

He prefers to work in this essentially anonymous state. This way, there is a separation between the artist and his art, where you can get to know their personality through the pieces themselves instead of through a quick Google or Facebook search.

He admits that he’s still “kind of nervous about doing bodies,” which is why you will most likely come across an oddly endearing disembodied head as opposed to a fully formed creature, limbs and all.

He loves to put these critters out there, though, regardless of whether or not you may find them aesthetically pleasing. “They’re eyes for me to look out through onto an environment. 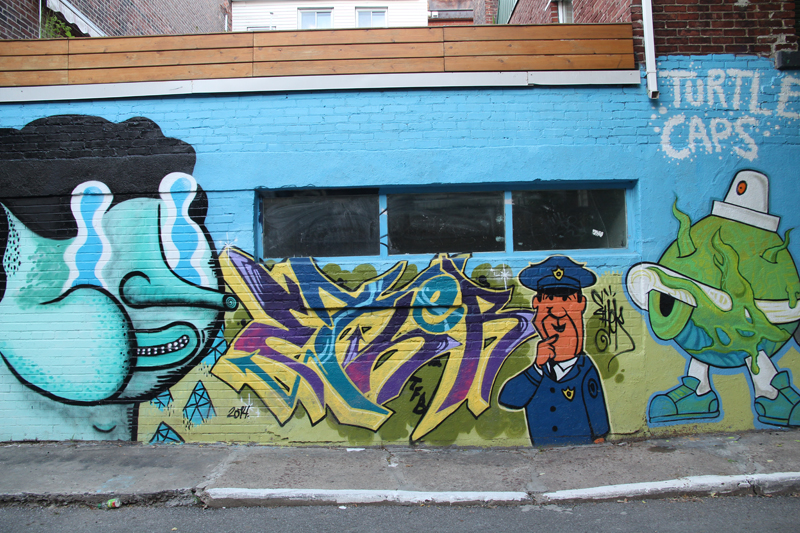 Though many of his creations are what he describes as being “something that could exist on another planet,” others are clearly based on more traditional and terrestrial critters.

Take a stroll deep through Griffintown and you’ll come across a majestic wall of over a dozen multi-coloured kitties. From bold blue to acidic yellow, these felines each carry with them the distinctly wavy and drippy features that characterize a Waxhead original.

He feels a kinship of sorts towards these felines, and that’s why he paints them. “I see them all the time when I’m painting at night. In the alleyways, they’re always there. I’m kind of just painting them as little people that stay in the environment and just chill.

“I use a lot of pink and bright colours just because I like them a lot,” he said. “I like cute things and I like cute art. I’m just trying to make things happy.”

One of his personal favourites can be seen walking along the Main. At the mouth of an alley near Rachel Street, a bald-headed and broadly grinning blue-green thing points you deeper into a courtyard of sorts. Their walls are covered with more freakishly adorable creatures of every shape and colour.

Like his recent piece consisting of what could only be described as an ice-cream cone amid alien-like figures, outside of Eva B on St-Laurent Blvd., many murals start out as a rough sketch in a notebook brimming with other creepy-cute creatures that have yet to make their earthly debut.

He then visualizes the space in which he’ll be working, then takes it from there using mostly spraypaint for the aesthetic value, but also because it’s relatively easy to use once you’ve got the technique down.

Though he makes interior pieces and other prints that can later be bought and sold, like the ones being displayed at Monastiraki, he feels more at ease painting in the streets.

“Creating art in the street has always kind of been my natural inclination. It’s a free canvas, it’s a free surface and I can just get it out there.” ■

The Waxhead exhibition is on through Sept. 6 at Monastiraki (5478 St-Laurent)[/vc_column_text][/vc_column][/vc_row]