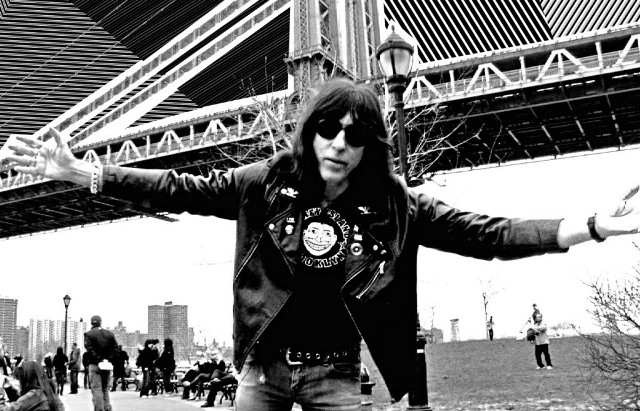 While he wasn’t part of the original line-up, with 15 years of service and over 1,700 shows under his belt, Marky Ramone’s energetic drumming was an integral part of the Ramones sound.

Since the band’s retirement in 1996 (the Ramones’ final show in our Belle Province was in Quebec City as part of that year’s Lollapalooza tour), he has kept busy with musical projects like the Intruders as well as with culinary ventures such as Marky Ramone’s Brooklyn’s Own Pasta Sauce — a portion of its proceeds goes to charity. As he proudly said: “I want to be the Punk Rock Paul Newman.”

Ahead of his appearance at Heavy Montreal this weekend, he will be signing copies of his book Punk Rock Blitzkrieg and sitting down for a live interview conducted by Kim Kelly (Noisey, Vice) at the Phi Centre.

I had the pleasure of speaking to Marky Ramone ahead of his visit to Montreal.

Pablo: Why was now the right time to release Punk Rock Blitzkrieg?

Marky Ramone: I’ve been working on it for about four years already. I did it because I still enjoy it. A lot of things have been exaggerated in the past and I wanted fans to know the true story. I’m amazed at the integration of the older fans and the younger fans and how the songs appeal to youth and even to the older generation, so it just bridges the generation gap and I’m in the middle of it (laughs).

P: I found it very fascinating reading and learning about the journey you took that led you to play in the Ramones. What was it like playing with Wayne County? I looked at the pictures and I can’t even begin to imagine how it was received back then!

M : Well, you know, it was the beginning of punk. It was ’74 when I played with him and he was a transvestite, a transvestite rocker, and back then a lot of people wouldn’t accept it because of the times. Now believe he’d be a multi-platinum seller, but the thing is, we were doing something totally different. We were an integral part of the punk scene and then after about a year and three or four months, I had to leave because nobody wanted to sign him. My buddies, my guitar player (Richie Wise from Dust) who produced the first two KISS albums, told me, “He is just too extreme.”

P: Was it pretty common back then to see a lot of the groups at each other’s shows?

M: Oh yeah! We were all friends. If I knew Debbie (Blondie) was playing, I’d sit in the front row watch her. If Johnny Thunders was playing with the Heartbreakers, I’d see him, he’d see my bands. The Ramones saw Dust (Marky’s first group) in ’71 when they weren’t even the Ramones, they loved us.

P: If you could describe every member in just a few words?

M: Joey, quiet, very introverted but a histrionic frontman lead singer. Johnny was your stab sergeant like the guy in F Troop, Sergeant O’Rourke — that was a TV series in the ’60s. Dee Dee was a whirlwind hurricane. Tommy was the guy who came up with the sound, basically, with producing the sound and getting it together and sending out all the leaflets and flyers for the record companies and management, so he kinda always saw the professional side of things. And me, I was the funny joker.

P: What do you want people to get or take from the book?

M: What it was like being in New York at that time, what it was like growing up in Brooklyn, New York and what it took to deal with all the crap in order to become what you wanted to be in life, you know what I mean? You know, today education is very important; then… then it was, but not as much as it is today. There’s so much technology today that young adults need to know, and if they can, they need to go to college, but back then I only relied on my drumming and I disliked school. The teachers are a lot better today — I think a lot of the students should realize that the teachers really have a lot of their best interests at heart.

P: How do you go about choosing the setlist for the shows? What can fans expect on Sunday for the gig?

M: I have the largest Ramones video library in the world. A lot of the footage from (Ramones documentary) End of the Century is mine. When I would watch the videos back, I would always make sure to see the reaction of the audience. That’s how I picked the setlist, what songs they liked.

Andrew WK came on board. He’s a Ramones fan. I didn’t want a clone of Joey. I wanted a guy that could do it his own way. It’s 2015, you know what I mean? He has fans and his own thing going, but he loves playing these songs. He came down and he knew them right away and I was very impressed. He knows how to engage the audience and that’s very important. I made sure this band is very tight. I’ll continue to do it as long as I still have fun doing it. ■