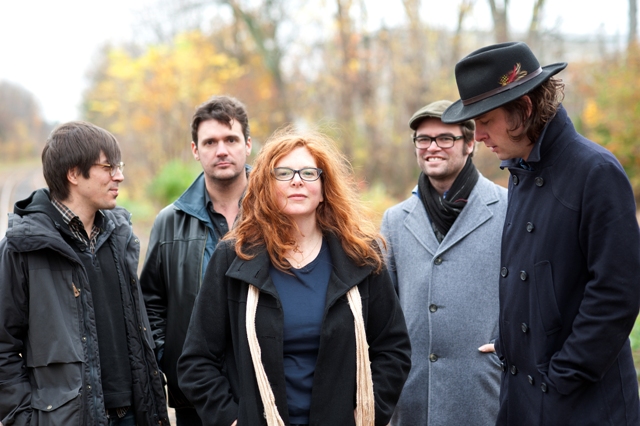 Katie Moore and her band. Photo by Caroline Desilets

Katie Moore is a pillar of Montreal’s folk music scene, even if her solo shows and recordings are somewhat sporadic. She’s like an old friend who drops out of view only to reappear suddenly and start up a conversation as if no time has passed; that friend-of-the-scene status is bolstered by frequent backing-vocal appearances with other local acts, like country singer Li’l Andy and neo-klezmer rapper Socalled.

Moore’s debut LP, Only Thing Worse, was released in 2007 and its follow-up, Montebello, in 2011. Fooled By the Fun is her new album, and though it’s being launched this month, it was already in the can as long ago as 2013.

“Life got in the way, and I was looking for a label,” says Moore, explaining the two-year delay. (The album is being released by Club Roll, the label founded by POP Montreal’s Dan Seligman.) “I’m excited to finally play these songs ’cause they feel like they’re from another time,” she adds, noting that she’s currently pursuing a Master’s degree in translation so she can add to the variety of jobs she does from day to day: she’s already a copy editor, proofreader  and cook.

“I have a million jobs to pay for my musical vanity project,” she explains with a laugh. “It’s kind of interesting ’cause [making music] is totally removed from trying to make money — [making money] would be nice, but I don’t think of it like that, so it gives me freedom to do whatever I want. I love the people I play with and I make sure I always have a good time with them.”

Fooled By the Fun is a lovely and moving record, a collection of songs inspired by a “friendship break-up,” rooted in the kind of soulful, rhythmic folk-rock that has become Moore’s signature, along with a voice that echoes the great Canadiana canon, vocalizing strength and fragility with each lilting phrase.

Among the guests on Fooled By the Fun are many of Moore’s usual suspects: Socalled, Warren Spicer (Plants and Animals), Angela Desveaux, Mike O’Brien (Sin and Swoon) and Dave Payant (Thee Silver Mt. Zion), as well as another Silver Mt. Zion member, violinist Jessica Moss.

“I really like what she does and I’d wanted to play with her for a few years, Moore says. “She was also into the idea, so that was pretty exciting. I feel like her violin really adds a lot.”

Recording started with demos in a fishing cabin in upstate New York, and was then split between Montreal’s Mixart Studios and Moore’s parents’ cottage in Hudson. “It sounds great in there, and it was the source for me — where I started getting into music, when I had a record player in my room and I would listen to Olivia Newton John. So it was fun to go back there and do something more productively creative.” ■