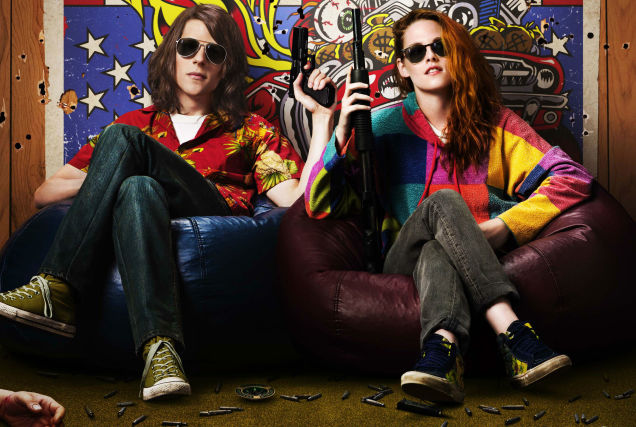 Although every bad movie leaves a specific imprint not unlike a fingerprint, most bad movies fall under one of two categories. The first kind of bad movie is pretty much fucked from the start: it’s a bad idea, badly handled by people who are either in way over their head or delusional as to the quality of their own ideas and talent.

The second kind of bad movie is the one where something ostensibly appears on the page to be a good idea, only to fall apart on-screen. In some cases, all you need is one dubious choice and soon everything starts falling apart. It’s easy to imagine the appeal of American Ultra when it’s still just a glint in someone’s eye; its mix of stoner humour and glib treatment of violence sets off pleasure receptors that have been dormant since the heyday of Shane Black in the mid-’90s. Unfortunately, a large part of what makes American Ultra not seem like the first kind of bad movie doesn’t make it to the screen.

Mike Howell (Jesse Eisenberg) lives a life of perfect stoner contentment in small-town America: he runs a convenience store that seems almost totally empty, affording him the luxury of toking up and drawing comic books while also saving up for a ring for his girlfriend Phoebe (Kristen Stewart). He’s preparing to propose to her when a mysterious woman (Connie Britton) visits him at work and blurts some nonsense at him. A few minutes later, Mike disarms and kills two guys in the parking lot without thinking about it. He soon discovers the brutal truth: he’s actually a highly-skilled, very deadly sleeper agent trained by the government as a killing machine, he’s being hunted by a power-hungry suit (Topher Grace) who has sent all of the other sleeper agents after him and the mysterious woman is a CIA operative gone rogue to save his life.

Max Landis’s script seems to be aiming for something darkly humorous, pairing the brutality and relentless assault of the action scenes with slow-witted stoner shenanigans. It’s worked before — I’d hold Pineapple Express up as a damn-near perfect example — but director Nima Nourizadeh seems altogether too enamored with the darkness. The best way to play off the juvenile nature of Landis’s script would be to heighten the silliness; instead, Nourizadeh doubles up on the gore and the violence in a way that suggests a hormonal teenager’s idea of dark badassery.

Nourizadeh’s mostly known for his music videos and his found-footage teen party romp Project X, so it’s not that surprising that the film feels like an even more sophomoric version of a Matthew Vaughn joint, but the MTV-meets-Max Payne aesthetic does the film no favours.

The wavering, uncertain tone is American Ultra’s biggest problem, but it’s not the only one. Grace is woefully miscast as the power-mad, profane villain — he’s never particularly convincing barking orders at super-soldiers or calling Britton a bitch through gritted teeth. Eisenberg and Stewart give decent performances given the circumstances, but they have very little chemistry, making it impossible for us to care about their sketchily defined relationship (admittedly, a third-act twist does put some of it into context, but it’s a little too late by that point). Pretty much all of the CIA stuff feels like kids playing pretend. I can’t honestly say that I know which filmed depictions of the CIA are actually accurate, but this feels particularly made up by kids whacking GI Joes against each other.

It’s not all bad, though. While Nourizadeh’s choice of chooga-chooga nu-metal jams on the soundtrack is dubious (for a genre whose most popular icons can’t get booked at a goddamned state fair, nu-metal has proven surprisingly resilient in the field of action cinema), he does pull off a couple of pretty great action scenes. There’s a sequence where Eisenberg dispatches a bunch of baddies in a hardware store using a random assortment of tools that’s shot in long takes and is undeniably an efficient bit of business, but even that suffers from Nourizadeh’s affinity for darkness and extravagant squibs. American Ultra looks rather good for the kind of film it is, but I’d trade that moody photography for some better jokes any day.

I should point out that American Ultra is a rarity: it’s a major summer release that’s also a wholly original idea, not based off any videogame, comic book, old ’60s TV show, series of lunchboxes or candy bar. I deeply wanted it to be good if only to prove that there’s still place for non-franchise films aimed at teenage boys, but alas: this is almost exactly that, with extra slow-motion arterial spray and f-bombs to class it up. ■
American Ultra opens in theatres on Friday, Aug. 21. Watch the trailer here: