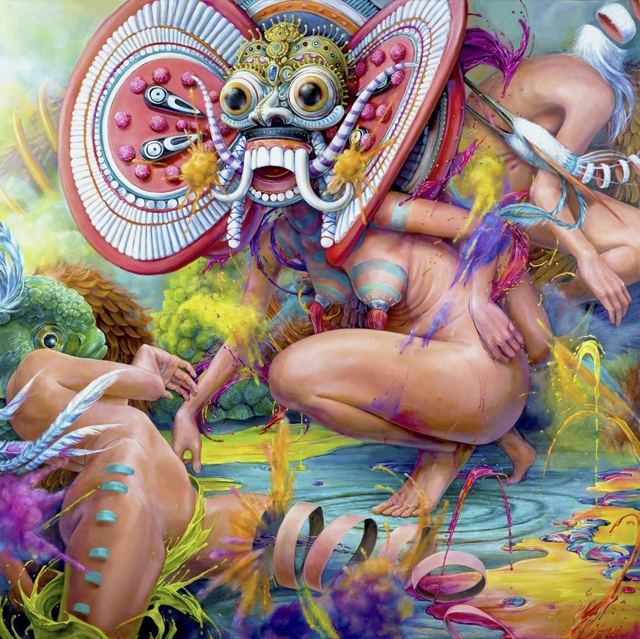 A few months ago, artist and curator Mira Silvers of the design studio Sugar 4 Brains decided to put on a small show featuring a handful of artists at a small venue. She made a facebook event and posted a banner featuring teaser images flanking the title of the show: Woman x Women. Three days later, she got a call from the venue asking “What did you do?” There was no way the space could accommodate the 800+ people who said they were attending, before Silvers had done any promotion at all.

Compelled to find a new venue, Silvers rescheduled and brought in dozens more artists to participate in the show, built around the theme of women’s bodies represented from the point of view of women themselves. Now, with the exhibition launching this week with two nights of special events, there are 34 artists in the line-up (including Guerrilla Girls, GILF!, Miss Me and A’shop’s Lacey & Layla) and over 4,000 Facebook subscribers — a level of interest that reflects the demand that exists to see more opportunities for women to exhibit their work that too often remains unsatisfied.

A major inspiration to Silvers in mounting the show came from the feminist activist artist group Guerrilla Girls, who made waves 30 years ago with their hard-hitting posters calling out museums, publications and other influential arts institutions for largely ignoring women creators. Though the status of women in the arts has undoubtedly improved over 30 years, we’re still a very long way from reaching a state of equal representation for women artists and artists of colour across the art world. In one iconic series of billboards (first launched in 1989 and updated with new numbers every few years) the Guerrilla Girls point out that as of 2012 at New York City’s MET Museum, less than four per cent of the artists in the modern art collection were women, but 76 per cent of the nudes in the collection depicted women’s bodies — numbers that have barely budged in 25 years. Earlier this spring, Canadian Art magazine conducted a review of solo shows at major museums in every Canadian province, with similarly discouraging results. 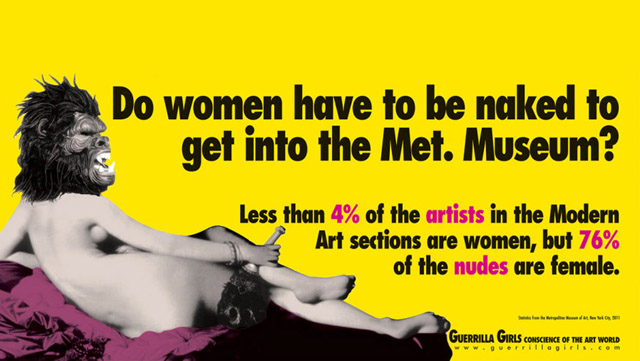 Poster (2012) by Guerrilla Girls, who are participating in the Woman x Women show

“I’m hoping to challenge people enough to give space to show that there’s this component that’s being disregarded,” Silvers tells me. “I can’t say it through academic language, but because I know art, it’s natural for me to want to represent that visually. That’s why I was really struck by the Guerrilla Girls, who basically took an image and converted it into an infograph, but still keeping it within the realm of art and still hitting people very hard. They still do what they do because there’s so much work to be done.

“The whole concept is about taking the naked body that was always under the male gaze and re-appropriating that,” Silvers continues, “but from a female perspective, and just seeing what would happen if we did that.”

Many of the artists whose work will be featured in the show, like Sandra Chevrier, MC Baldassari, Heidi Taillefer, Abdala Kaufman, Sophie Wilkins and Hannah Natali, are already well known for producing work that often features women’s bodies. Many of these artists work within the genres of greatest interest to Silvers, namely street art, graffiti and pop surrealism.

Like other genres of art, there’s no shortage of talented women contributing to these fields, but you wouldn’t know it from most festival line-ups or exhibition catalogues. The idea for a show featuring exclusively women artists was initially a reaction to Silvers’ disappointment at seeing only one woman among the nine headliners of the 2015 Spectrum Street Art Festival in New Zealand, to which Sugar 4 Brains submitted a piece. The statistics aren’t much better here: the most recent edition of Montreal’s Mural Festival held in June featured just three women out of a line-up of 20 muralists.

Given the huge response for this week’s exhibition, Silvers has big plans to follow up with more events in the future to highlight and promote women in visual arts and other creative fields. She’s registered Woman x Women as a non-profit to facilitate organizing future events, with the goal of creating a multidisciplinary festival to showcase women in a variety of creative fields from art to music, fashion, culinary arts and more.

“I’m hoping this show will push things just a little bit,” says Silvers. “I’m not saying this show’s going to change the world, but maybe something small will happen and that ripple will get a little bit bigger.” ■

The Woman x Women exhibition opens at Station 16 (3523 St-Laurent) with a VIP vernissage Wednesday night and a public vernissage Thursday, followed by an afterparty with an all-woman line-up of DJs at le Belmont (4483 St-Laurent), including Ryan Playground, Naadei, Compton Chic and more. The exhibit will be viewable at Station 16 until Aug. 8. To RSVP to Wednesday’s VIP night, contact Sugar 4 Brains here.