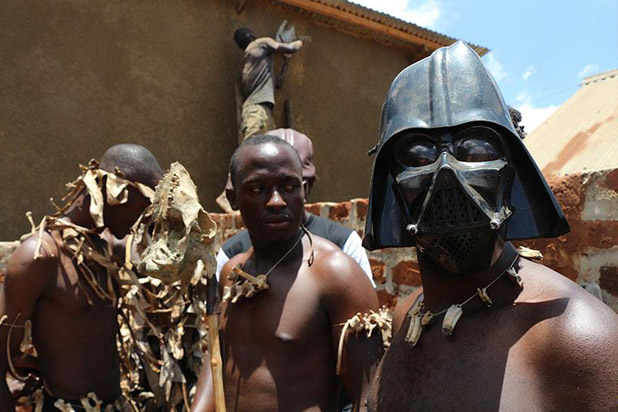 While African cinema has been slowly gaining visibility on the international scene in the last couple of decades, the few African films that make it to our shores each year generally fit the mold of the stately, minimalist drama. There’s never been anything quite like the films coming out of Wakaliwood, a DIY film studio based out of Wakaliga, a slum in the Ugandan capital of Kampala that specializes in low-budget rat-a-tat action movies.

Montrealers can get a front-row glimpse of the insanity and carnage of films produced in Wakaliwood thanks to the Fantasia festival, which will be screening their most popular film Who Killed Captain Alex? alongside a bevy of trailers and other surprises. The evening will be hosted by Montreal ex-pat David Bertrand (of the late, great Blue Sunshine Psychotronic Film Centre), who recently travelled to Uganda to write a piece on Wakaliwood for Fangoria magazine’s September issue.

Wakaliwood’s spokesperson to the Western world is Alan Ssali Hofmanis, a New York-based filmmaker and film programmer who became so smitten with the trailer for Who Killed Captain Alex? that he packed up his life in the Big Apple and moved to Wakaliga to work at Ramon Films.

“To me, it was a puzzle. An exciting puzzle. My background is in film production, but I was the director of programming for an international film festival (the Lake Placid Film Forum) for a number of years. (…) Captain Alex made no sense. Yes, it was crazy and full of passion, but in the West if you have no money, you shoot a family reunion or two people talking. You don’t make a war film,” he explains. “Two weeks after watching the trailer, I was in Uganda, and along the way somehow became a Ugandan action movie star. I did not call or email, though I had IGG’s (aka Nabwana Isaac Godfrey Geoffrey, director of Captain Alex) cell number as it’s on the trailers. I just came. Nothing would stop me, and I knew I would find him.”

Budgets for films made in Wakaliga hover around $200. IGG and his crew make the majority of the prop weapons (including, apparently, an entire helicopter made from scrap metal!), costumes and special effects make-up themselves (they started out using actual cow blood in lieu of squibs, but the blood started making the actors sick, forcing a move to perhaps less convincing fake blood). The computer-generated effects are rudimentary but plentiful; things explode at a fairly regular rate. Most of the films are pieced together over a series of shoots and eventually sold around town. While to the Western mind the budgets and eventual profits are downright minuscule, they provide considerable income to the filmmakers.

“The main difference between a Ugandan film set vs. the rest of the world is a complete lack of rules, regulations, resources or any useful apparatus to help you achieve your goals,” explains Bertrand. “Of course there’s no government funding and no film studios, but there’s also no distributors, no festival or theatre circuit, no William F. White gear rentals, no film courses or any guide on how to do anything, other than to take a look on the Internet (when dial-up actually works), or to buy bootlegged movies and try to imagine how they did it. Everything about making films in Uganda is extremely complicated and challenging and you are totally on your own.” 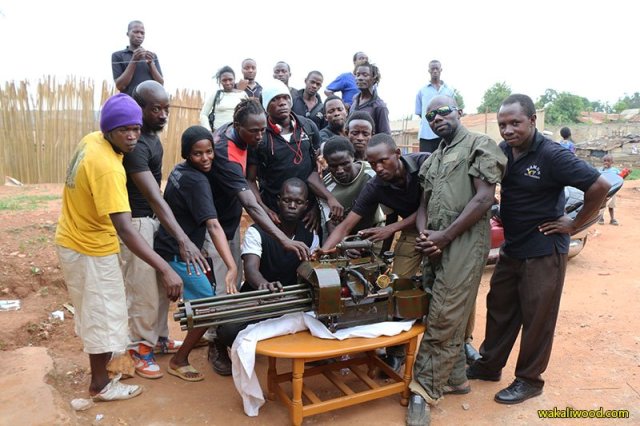 The freewheeling DIY spirit is evident even in the trailers for the films. While the budget is clearly minuscule and the effects often ramshackle, the pace is non-stop and the artists’ devotion to the material impressive. Knock-down, drag-out fights and stunts abound; fake blood flows freely — all of this in spite of the film’s guerrilla, borderline-illegal techniques. “A typical scenario would involve him shouting things in Lugunda (the primary language of the region), with a flurry of crew activity setting up the shot and me having no idea what’s going on,” explains Bertrand of his time on an IGG set. “Then abruptly Nabwana IGG would say in English: “Okay, Alan, now you run over here, the cannibals push you on all sides while they chant about eating you, in the middle of the circle you fight a battle with Bruce U, cannibal kung fu priest. Then you run for your life down this hill while the cannibals chase you on motorcycles. Okay? Okay. ACTION!”

Bertrand even filmed a cameo for an untitled film that IGG is currently working on — he always has several projects going at once, some of which share footage but all of which share the same sense of carnage.  “I was just running around screaming bloody murder and shooting a prop rifle, but I was dressed in combat fatigues, which is a serious illegal offence is Uganda,” says Bertrand. “When you watch Who Killed Captain Alex? at Fantasia, keep in mind that every actor in fatigues is breaking the law and praying that the authorities don’t bust their heads for impersonating an army officer.”

The film viewing experience in Uganda is a more participative experience thanks to the use of a VJ. “In the ghettos, we use what’s called a VJ (video joker). It’s like a cross between Mystery Science Theater 3000, cheerleader, and slum tour guide,” explains Hofmanis. “VJs became popular in Uganda during the early 1980s. People would watch Rambo and wonder what they were saying. Subtitles were not possible, so the idea came where someone would take a microphone and explain the story to the audience as they were watching the film. The problem is they did not know English either and made everything up and a comedy act was born. I saw Air Force One, and apparently the President slept with Gary Oldman’s wife!”

Hofmanis and the rest of the Ramon Films crew have big plans for the current slate of projects, which include the aforementioned cannibal epic in which Bertrand cameos.“IGG has produced over 40 feature films from this one ghetto, but the dream is to have a few acres of land and make something truly special that can support artists all over the world. (…) The next wave of films will be the world’s first crowd-sourced action films from anywhere, much less a Third World slum,” says Hofmanis. “Anyone will be able to become a Ugandan action movie star from their own home, just by sending us a video. But they have to die, of course!” ■