Revenge movies come in all shades, and this Canadian film is near the opposite end of the spectrum from the exploitation films of the past, or from Tarantino’s recent slate of grandiose revenge fantasies. Though the crimes and the vengeful acts that occur in their wake are almost always gruesome in these movies (from the wackiest grindhouse entries to the driest, darkest revenge stories), The Demolisher is relentlessly grim throughout. But to the credit of director Gabriel Carrer and his cast and crew, its intensity and style keep it compelling.

Bruce (Ry Barrett) is the husband of a policewoman who was left disabled and wheelchair-bound after a brutal beating on the job. Wearing a riot cop suit and motorcycle helmet, he strikes back at members of the gang that perpetrated the attack, but doesn’t hit them hard enough to satisfy his anger. And so he loses all moral highground and starts beating and killing random people, his paranoia leading him to stalk a woman he thinks is tied in with his wife’s attack.

The mood of this film, its darkness and frequent car scenes set to a shrill, pounding synth score (by Future Funk Squad) — plus that one pseudo-’80s song played over a slow-motion sequence — feels akin to the atmospheres created in Drive and Nightcrawler. I don’t know if I’ve ever seen Toronto depicted this way, shifting from soulless residential streets to shadowy cityscapes covered in a web of streetcar cables. This is not a spoiler, but the film ends with a shot of the downtown skyline, and it feels far from the friendly Canadian metropolis most people consider it to be. (Lorraine Carpenter) 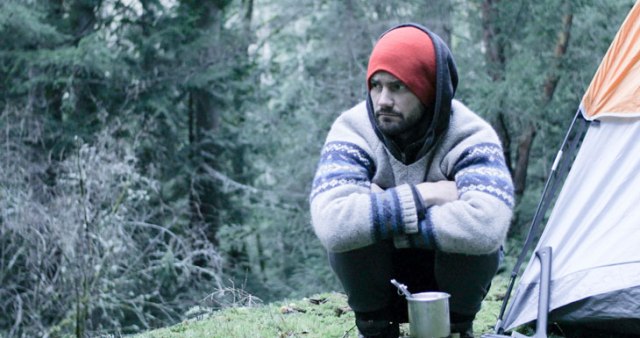 What starts off feeling like a ridiculous mumblecore comedy, complete with a hapless protagonist in the Mark Duplass mold, develops into a survival story where the woods of B.C. feel almost as menacing as the strange figure that seems to be stalking our “hero.”

The film’s first act is pretty entertaining, following James (Patrick McFadden) on a trail of self-sabotage. It begins with a medical exam that he goes to stoned, then to his job that he quits in a grand display of boss-hate, then to his girlfriend that he dumps for reasons unknown. After an absurd flirtation with manual labour, he leaves Toronto to live as a scavenging hermit on the West Coast.

That’s when solitude and paranoia and Blair Witch-type phenomena starts to take over. Director Trevor Juras handles the shift in tone pretty well, because there is some terrifying shit that goes down in the darkness of the forest, always alive with strange sounds. We’re totally sucked into James’s dilemma, which no longer feels ridiculous at all. (LC)

Ryuzo and the Seven Henchmen 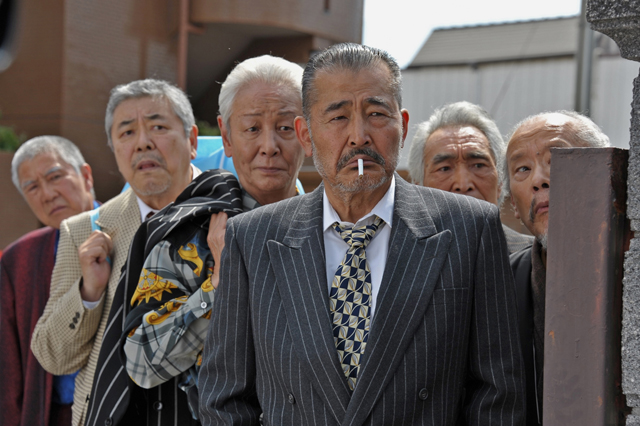 As an actor and director, Takeshi ‘Beat’ Kitano’s reputation is second to none. His aptitude to accurately portray the Yakuza underworld has earned him universal praise, including from real gangsters who even once abducted him just to thank him for the realism of his films. It was only a matter of time until he dealt with geriatric Yakuzas in one of his films.

Ryuzo (Tatsuya Fuji) misses the old days. Retired and broke, he now lives with his son and his family. The ex-Yakuza loves retelling the stories of his youth, when his gang and him would rule the streets, to the great disapproval of his son who doesn’t want his reputation to be tarnished for having a criminal as a parent. When young gangsters try to embezzle him, Ryuzo decides to reunite with his acolytes and regain control of his old turf. However, the world has changed since he could intimidate everyone with his tattoos, and he soon discovers that modern criminals do not abide by the ancient codes of honour so precious to him.

Armed with a mix of goofy and dark humour, Ryuzo and the Seven Henchmen paints a touching picture of an old criminal who’s sometimes vulnerable and yet retains his guts. There’s this persistent feeling through the film that not only the criminal universe, but also the world becomes increasingly alienating with age. Ever the iconoclast, Kitano once again directs a movie with edge, taking us in uncomfortable territories. A running gag about WWII climaxes with one of the henchmen fulfilling his fantasy of dying like a Kamikaze by crashing a light single-engine plane into an U.S. warship (!)—Kitano’s cynicism is at full effect here. 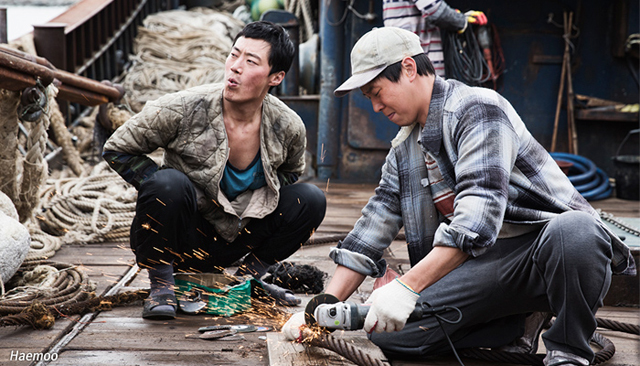 Korean thrillers have found a place of choice at Fantasia, where their brand of unrelenting darkness, intricate plotting and brutality fit right into the programming. The prestige associated with this wave of thrillers isn’t limited to genre festivals, however; Shim Sung-bo’s Haemoo was a hit on the festival circuit last year, appearing in a good 30 international festivals and being submitted as South Korea’s official entry for the last Oscars. In a program made up primarily of low-budget horror films, Haemoo sticks out not only by its star-studded array of talent but also its relentless pacing. In other words, it’s the rare kind of film that would feel at home on any program.

Times are tough on the fishing vessel Jeonjinho. Despite going out every day, the crew is unable to catch enough fish to sustain their salaries. The ship’s captain, Cheol-joo (Kim Yoon-seok) finds himself caught between a rock and a hard place, borrowing money to give his men enough of an advance to eat. He accepts an unsavory proposition from a local gangster; the Jeonjinho will smuggle thirty illegal Chinese immigrants into Korea in exchange for a handsome payday. It should be a relatively simple job, but the boat encounters heavy fog (the Haemoo of the title) on the return journey and turns what would’ve been a simple trip into a whole different kind of ordeal.

Written and produced by Bong-Joon Ho (Snowpiercer, Memories of Murder) and directed by his co-writer on Memories of Murder, the tone and relentless intensity of Haemoo seems instantly familiar. It doesn’t have the wild tonal shifts of Snowpiercer or The Host; Haemoo plays out in significantly more conventional fashion, most likely owing to its roots as a stage play. There’s a lot more backstabbing and allegiance-switching in the disaster-movie mold than this team has accustomed us to, but conventional doesn’t mean unexciting, however. Foreboding and unrelenting, Haemoo is white-knuckle from minute one. (Alex Rose)