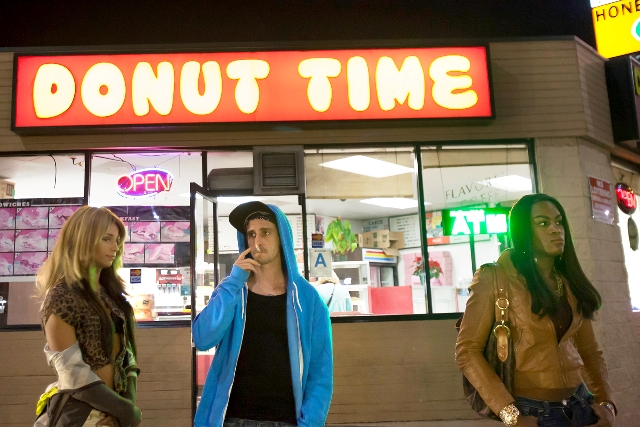 The thinkpiece potential behind Tangerine is immense. For starters, it was shot entirely on iPhones — not exactly the first film to do so, but certainly the one that has benefitted from the most visibility thus far. More importantly, it’s a raunchy, raucous comedy about and starring black transwomen that was written and directed by cis white men. By virtue of its very existence, Tangerine has already engendered (no pun intended) a million hot takes from a million social critics, activists, film critics and people yelling into the abyss that is Internet comments. Is Tangerine really a watershed moment in a film industry that was rewarding a cis white guy (Jared Leto) 20 times over not even two years ago? Can a film that contains the word “bitch” approximately 10,000 times in its 89-minute running time really stand as a turning point in a very particular kind of representation struggle?

It does, and it doesn’t. Either way, it doesn’t need to. 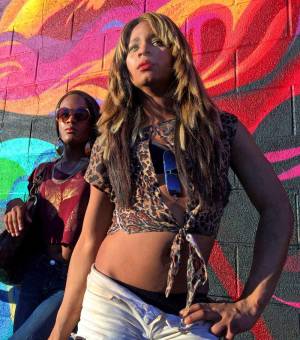 Sindee (Kitana Kiki Rodriguez) is released from prison on Christmas Day after a month-long drug possession stint only to be told by her best friend Alexandra (Mya Taylor) that her boyfriend/pimp Chester (James Ransone) has reportedly been cheating on her with a girl. All Sindee knows about the girl is that she’s white and her name might start with a D (it turns out to be Dinah, played by Mickey O’Hagan); that’s enough to set her off on a day-long quest across West Hollywood to find the bitch (bitch is Tangerine’s most frequently occurring word — I would not recommend making it a drinking game) and have Chester face his transgressions head on.

The great majority of Tangerine is loud and dizzying and pitched at a frenzy that has only really been matched by films like After Hours or even the works of John Waters (I guess you could charitably describe it as “kitchen-sink John Waters”). It’s vulgar and crude for most of its runtime, but it’s also incredibly funny and human. There’s really not much to Sindee’s quest on paper: she frequents dingy donut shops, parking lots and motels in search of Chester with the oft-abused Dinah strapped to her like a West Hollywood remake of The Defiant Ones. The use of iPhone cameras creates a hazy, neon-saturated feel and allows for scenes to unfold in corners habitually too cramped for proper film scenes — this contributes to a cohesive feel of slight otherworldliness, depicting the back alleys and anonymous concrete blocks of Los Angeles in a way that we’ve never quite seen before.

Tangerine’s problems begin with the character of Razmik (Karren Karagulian), an Armenian cab driver who works the West Hollywood beat and is familiar with most of the working girls (on both levels you’d expect). Razmik is married with a small child, but he continually neglects them (on Christmas Day, no less) to spend time with prostitutes. Besides adding a bit of colour here and there, the Razmik storyline doesn’t do much for the film besides cloud the water and add a few more voices to the film’s shouty climax. The idea of adding the character of a cis man who patronizes trans prostitutes isn’t necessarily a terrible one, but it seems shoehorned into the plot of Tangerine in an uncomfortable way.

Tangerine ultimately has a lot more to do with Superbad than it does something like Dallas Buyers Club. It’s vulgar and raunchy and a lot of fun, but let’s face it: this is not the breakthrough trans issues film that it’s being touted as. It focuses on a subculture that’s unlikely to appeal to the people that need to see these issues humanized. It’s got enough puking and shitting and yelling to ensure that it will never make it into any kind of canon that doesn’t also have the words “Alamo Drafthouse” surrounding it. As star-making as Rodriguez and Taylor’s performances should be, I think it’s more likely that it’ll simply mean them losing auditions to Laverne Cox.

Any step forward is a step forward, no matter how small. The trans movement needs its vulgar comedies, too, and it’s reductive and insulting to assume that progress only comes in the form of stately, teary-eyed prestige dramas, but that doesn’t mean those are going to go away, either. ■