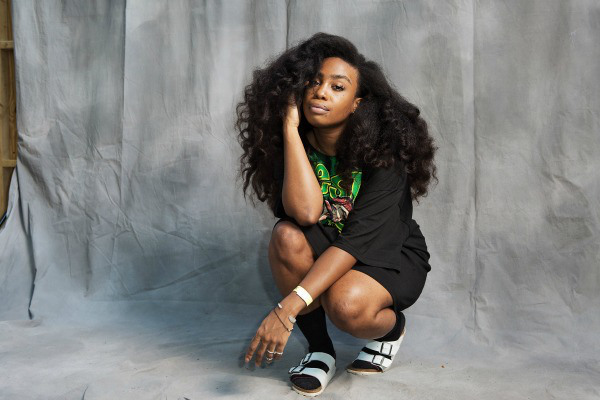 Solana Rowe is having a good summer. The alt-R&B/electro-soul singer known as SZA has played a series of festival sets that are amplifying her sound to new audiences, and building significant hype for her next EP, A. Still in the recording phase with Benny Cassette (Kanye West), Thundercat and other MCs and producers, A will complete the EP trilogy that began with S (2013) and Z (2014), all released by major U.S. rap label Top Dawg Entertainment — she’s their first female signee, and first singer on the roster, too.

Among SZA’s recent festival dates — some of which have seen her join label-mate Kendrick Lamar, who’s featured on her 2014 single “Babylon” (she’s appeared on a bunch of his tracks, and provided backing vocals on his latest record) — the set that she and her five-piece band played at Manchester, Tennessee’s Bonnaroo was particularly triumphant. Her sizzling set of familiar and unreleased material (with a cameo by Chance the Rapper) won over the crowd to the point where she was called back for an encore, a real rarity at these festivals, where strict schedules are usually respected.

“It’s funny, I used to be most afraid of playing outdoors ’cause the acoustics suck and it’s usually broad day — it’s not intimate, it’s very exposed,” says SZA. “But I realized that I was gonna be playing outside often and I had to find a way to embrace it, so I did — I started to get into it. (At Bonnaroo) I was really excited about the energy of the crowd, and instead of thinking the acoustics were bad, it started to feel like the sound was travelling more. It was just dope.”

That’s good news for fans who’ll be seeing SZA at Osheaga in August, but stage fright is something the singer still deals with at every show — she described Bonnaroo as “terrifying.”
Born in St. Louis, MO and brought up in Maplewood, NJ, SZA was raised an orthodox Muslim, her hair tamed and hidden under a hijab until post-9/11 bullying inspired her to remove it for good. She was also a competitive gymnast for 13 years, and a dancer (who was more powerful than graceful, she says).

Music started as an interest, then a hobby. It wasn’t something she took seriously right away. “I wasn’t in the mood to be an artist — I didn’t want the scrutiny or the judgment or the responsibility,” she says. “I just wanted to make tunes and eat snacks and get money, like everyone else, but it bloomed, and now I have a different connection to my art. I love it. It’s a fullblown passion.”

As for pre-show stage fright — the “process of throwing up, going to the bathroom, shaking, feeling like I was going to pass out” — SZA is in a much better place now.

“At the Afropunk festival last year, the crowds were crazy and I had so much fear that something just snapped in my brain and it released me. My body started moving on its own.
“Early on, I remember asking Kendrick what he did on stage to let go and feel comfortable, and he said, ‘You gotta come out of your body,’ and I looked at him like, ‘What the hell are you talking about?’ But I completely understand now. It removes all the fear, and to hear the music come alive, you can feel every note and every key, you can feel the vibrations in your chest. It’s a different feeling. It’s very addictive.” ■