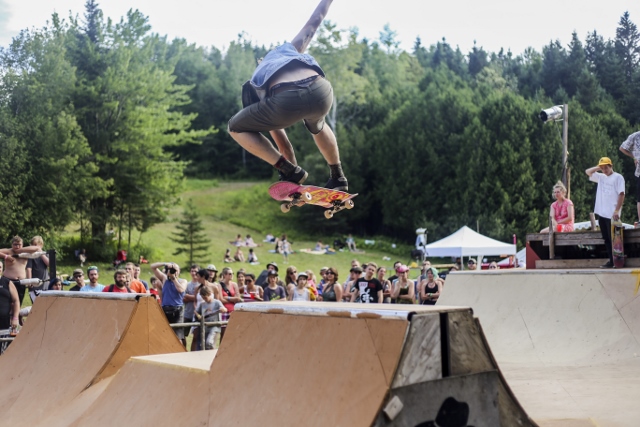 If festivals are starting to look and feel a bit too cookie-cutter for you, then grab your camping gear and head down highway 10 to Barnston-Ouest near the border this July 9–12 for the 10th anniversary edition of ShazamFest.

Founded by Ziv Przytyk and held on his land, ShazamFest brings a carnival-like atmosphere to the country with bands, burlesque, wrestling, skateboarding, camping and grub. It’s about as underground as it gets, although it has developed a dedicated following over the last decade.

“So far we’ve gotten people from 16 different states and every province,” says Przytyk. “Last year I had volunteers from Germany and England. Working in the underground, it’s all for the glory and not for the money. That’s for sure.”

People who discover the festival online tend to be the types looking for something new and fresh festival-wise, but the musical line-ups at ShazamFest also never fail to impress, usually bringing together an interesting mix of personalities. This year is no different, with hip hop eccentrics Buck 65 and Socalled set to headline. Other acts include Bob Log III, the Damn Truth, Face-T and Lemon Bucket Orchestra. Les Deuxluxes will be playing a special Thursday evening opening party, and to celebrate Shazam’s anniversary, Sunday will be free to the public.

ShazamFest is also Quebec’s most sustainable festival, and proudly so: last year’s edition attracted 1,500 people, and combined they only had to throw out 22 bags of garbage. The water comes from a gravity-fed well that Pryztyk made. He even built the stages and structures out of recycled wood.

“The festival is as green as we can make it,” says Przytyk, who starts putting everything together about a month and a half prior. He’s always looking for new ways to be sustainable: this year his beer partner, Beau’s from Vankleek Hill, ON, will provide reusable, compostable cups. “The food is sourced locally and we have a lot of organic options for meat-eaters and vegans,” he adds.

Another interesting development has been how family-friendly the festival has become. “Last year we had over 200 children on site,” he says.

“When I started, I honestly had no clue what I was getting myself into. I was hoping to make more money at the beginning, but that’s no longer what I really care about. What’s important to me is the scene we’ve created. We’ve managed to foster a really amazing community of people that come together every year. We’ve put on other things, and other artists have gotten together here and collaborated. A lot of amazing things have happened here the last 10 years.” ■