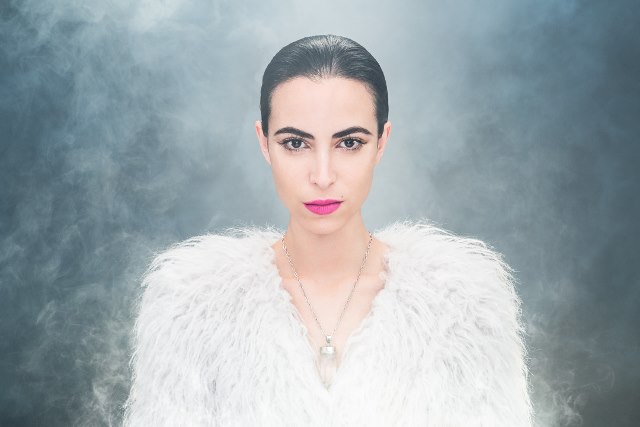 Iris arrived in the fall of 2014 with “I’ll Wait for You,” a beautifully spun synth-pop tune that heralded the emergence of a fresh music project. The song wound up in our year-end list of Top 30 Montreal Songs, and quickly caught the attention of music critics and tastemakers in the U.S. and U.K.

This solo project has been gestating for some time. Iris Campo played drums with a local band called Roads from 2006 to 2012. They released an album on Indica Records in 2010, a positive end to what had been an incredibly tough year. Campo developed Ulcerative-Colitis, similar to Crohn’s disease, a condition that became so severe that she required three major surgeries to undergo a total colectomy.

“Six years later, I’m still recovering,” Campo says. “I don’t have the disease anymore, technically, because it’s a disease of the colon and I don’t have a colon, but this is going to follow me. The thing is, I tell everyone about this because I almost died and I was reborn, and it made me appreciate life in a new way. It has been amazing. It pushed me to release the Roads album and then my own stuff, so it’s been a really positive experience.”

On the other side of that drama, Campo teamed up with visual artist and musician Marco Royal Nicodemo — as well as producer Scott Moffatt (of the Moffatts), who had worked with Roads — and eventually penned 20 songs together, five of which will appear on Iris’s forthcoming EP. Her second single, “Follow Me,” was released in April, keeping listeners hooked with groove, melody and a rich sonic palette.

Though her aesthetic is totally modern at first listen, and lacking the factory-line feel of contemporary radio fare, Campo’s chief influences are staple pop stars of the ’70s and ’80s, specifically Phil Collins, ABBA, Queen, Peter Gabriel and, last but actually first, Aerosmith.

“My favourite band is Aerosmith,” she says. Back in 2012, a chance glance at Twitter led her to a nearly hour-long conversation with Steven Tyler (and a stage-view of Aerosmith’s show the following night). “It’s all kind of a blur ’cause it’s so surreal, but luckily I have a video. He gave me a few songwriting tips: he said it just takes  one simple idea and then you can write anything. Music is not that complicated, you just have to practise and always keep writing and it becomes like a muscle that you can train.

“He’s my all-time idol — he’s the reason I started making music, so you can imagine. Even talking about it now, I shake. It was basically like meeting God.”

Montrealers can catch Tyler’s disciple this Saturday at Cult MTL’s third annual anniversary BBQ at SAT, and see the wisdom in action. It’s only her second live show with this project, and for the occasion she’ll be joined by a drummer and a bassist (who’ll do double duty on keys).

“It’s pop music but it’s very complex musically, there’s a lot of stuff going on, so we’re gonna concentrate on making it sound awesome and fun for us to play. I’m really excited about this show.” ■

Iris will perform at Cult MTL’s annual BBQ, alongside Technical Kidman and many more bands and DJs to be announced (see updates here), at SAT (1201 St-Laurent), doors 3 p.m., show 4 p.m., free with RSVP/$5 at the door