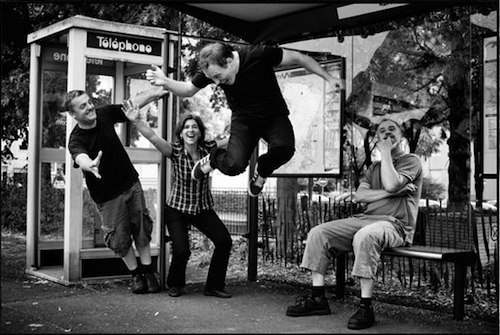 The word “radical” literally refers to a search for roots, and so it is fitting that Montreal’s self-proclaimed festival of “liberation music” celebrates its 15th edition by returning to its roots. Suoni consistently proves to be the anti-festival par excellence, a rich program spanning the spectrum of experimental, electronic, free jazz, punk, metal, psychedelic and new music, films and workshops across nearly a month of programming. The unadventurous should stay home, while seekers of challenging and provocative music will never be disappointed.

Founded by Mauro Pezzente (Godspeed You! Black Emperor) and Kiva Stimac (Popolo Press), Suoni can still boast the most amazing programming (the best posters), the right combination of tradition and innovation, of local flavour and international art forms. Part of being radical means creating your own roots, and so the three venues owned by Pezzente and Simac will be at the heart of the festival this year: Casa del Popolo (4873 St-Laurent), la Sala Rossa (4848 St-Laurent) and la Vitrola (4602 St-Laurent). This guarantees intimate events, and also spotlights the immense and diverse talents of Montreal’s local arts communities while bringing them together with a who’s-who of radical music from around the globe. Performances from members of Howl! Arts, Xarah Dion (June 21, la Vitrola, 8:45 p.m., $10/$12), Jessica Moss (June 8, Casa del Popolo, 8:45 p.m., $8/$10) and the Gypsy Kumbia Orchestra (June 13, la Sala Rossa, 10 p.m., $10/$12), are only a few of the Montreal-centric evenings to grace this year’s edition.

Dinosaur Jr.’s J Mascis will be performing a solo show (June 5, la Sala Rossa, 9:15 p.m., $25), and if that wasn’t enough will return for a second concert backed by the stoner metal of Heavy Blanket and members of Godspeed (June 6, la Vitrola, 9:15, $15). Nuff said. Speaking of Godspeed, the Mile End Ladies’ String Auxiliary — which includes members of Godspeed, A Silver Mt. Zion and Hanged Up — returns from an extended hiatus. Their ensemble hasn’t received as much attention as some other affiliated acts, something that sorely needs rectifying, so don’t miss this rare opportunity to see the neighbourhood’s best kept secret (June 9, la Sala Rossa, 8:45 p.m., $12).

Montreal’s new music quartet Quatuor Bozzini will be joined by two of the most important living American composers, each characterized by vastly different approaches. Pauline Oliveros is known as a co-founder of the Deep Listening Institute, for her important contributions to the creation of the San Francisco Tape Music Center and Mills College’s renowned music program, and for her many decades of contemplative improvisation on the accordion, most recently utilizing a complex chain of multiple delays to create a blurred sense of time. Alvin Lucier is one of the great figures on the edge of contemporary composition and sound art, famous for his process work “I am Sitting in a Room.” (June 5, le Gèsu, 1202 Bleury, 7:45 p.m., $15 + June 7, la Sala Rossa, 8:30 p.m., $15).

Blevin Blectum, an alumnus of Mills College and member of the pioneering sampler-based duo Blectum From Blechdom, will be transmitting her sci-fi inspired anti-groove (June 8, la Vitrola, 8:45 p.m., free), and Puce Mary’s power electronics will probably call for some earplugs (June 19, la Vitrola, 9:30 p.m., $10/$12). Those looking for more rock with their loud should look no further than legendary Dutch punk rockers and festival stalwarts the Ex (June 22, la Sala Rossa, 8:45 p.m., $20/$22).

That’s a tremendous variety of challenging music, representing the hybridity and autopoiesis Suoni is known for. But it wouldn’t be Suoni without jazz, and the 15th edition doesn’t fail to deliver the goods. Paal Nilssen-Love returns to Montreal with his 10-piece orchestra Large Unit for two nights showcasing Norway’s most powerful improvisers (June 20 & 21, la Sala Rossa, 9:15 p.m., $18/$22). Ken Vandermark, one of Chicago’s great musicians, will deliver a unique solo concert (June 19, Casa del Popolo, 9:15 p.m., $13/$15). But my number one pick goes to another Chicago player, currently based in Brooklyn but with a long affiliation with our great city: Matana Roberts. Her recent solo record River Run Thee is the best album of the year, so don’t sleep on this chance to see her powerful solo performance (June 7, Casa del Popolo, 8:45 p.m., $10/$12). ■