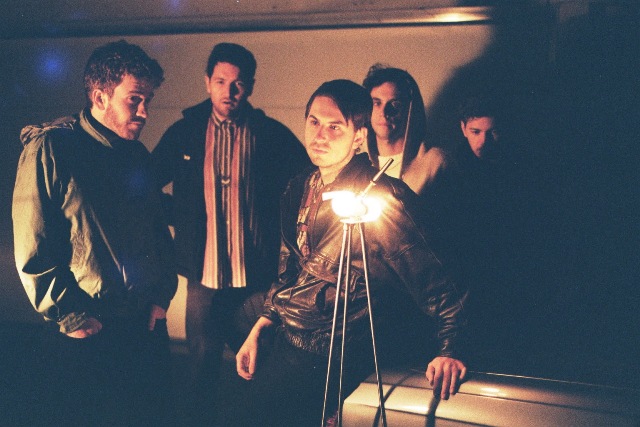 It’s been a whole four years since Montreal band Pat Jordache released Future Songs, a record that had a difficult birth, its tracks rescued from the wreckage of dead gear. Steps is the long-awaited follow-up, and it was also a salvage job of sorts, though the abortion of its first incarnation was entirely intentional, and exactly what the record needed.

“The first instinct isn’t always the best one,” says band leader Pat Grégoire. “I spent a lot of time in the studio building things up, taking them apart again and rebuilding. A lot of the songs were pretty much done and then I decided that I wanted to try them different ways. I wanted to get into different kinds of sounds and be a bit more experimental.”

Steps came out as a wild-style art funk record, but when Grégoire first began recording it, at what used to be the Silver Door, it was, as he describes it, “a little more tasteful and referential, on some Mark Knopfler slicker kind of ’80s stuff.”

“When you’re making that kind of music, it’s really satisfying the first time around and the second time around it doesn’t have a lot of staying power,” he says. “Once I started making the arrangements a little more challenging and a little more worldly, there was strangeness to those sounds that was more exciting to me, and that comes across. You jump off the page to people when it doesn’t sound like something they’ve heard before, like ‘What the hell is this?’ It freaks them out.”

The exhilaration that came with ripping up the record and starting again was an affirmation of how Grégoire feels about art.

“You want to stand out from the pack, you want to push. That’s how you can make a mark and enter into people’s heads. A lot of people are really good at being controlled and conservative and precise, but I always fuck it up when I try and do that. Sometimes when you’re making music or making art, you should feel like you’re being bad, like you’re a kid smearing on walls.”

When playing the new material live, Grégoire chose to pare down the seven/eight-piece band he was working with a few years ago in favour of a light, economical  “electronic karaoke” act with his friend, local DJ Adam Wilcox (plus guest musicians like sax player Adam Kinner and Bataille Solaire guitarist Asaël Robitaille for hometown shows).

“It’s super cool! Basically I got (Wilcox) to make backing tracks for the songs from memory, to recreate the arrangements. He’s a really great producer, he’s a really great electronic musician but he’s not a trained musician, and it’s him doing it all by ear. It’s interesting the things he skips over or changes in the process. It has an Italo sound to it, and there’s influences of trance and techno in there.”

Other major projects that have kept Grégoire hard at work in recent years were the establishment of the label Banko Gotiti, and a mixing studio within the Hotel2Tango recording studio building (which also houses Constellation Records and Grey Market Mastering), a fully renovated space built for premium acoustics.

“It’s just a good-sounding room where you can actually hear what’s going on,” he says. “So many people are making music at home now, so we (Grégoire and Tyler Fitzmaurice) wanted to have a space where people could come and finish up what they were doing themselves.

“We do get bands in who are looking to do a full start to finish track from kick drum all the way to vocal, then we’ll rent more space from Hotel. Those guys are great, really nice neighbours to have.” ■