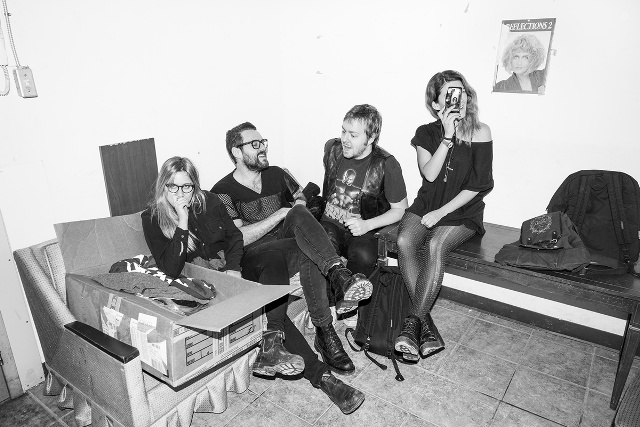 No Joy had just made their way back to Montreal from a three-week European/U.K. tour when I spoke to singer/guitarist Jasamine White-Gluz, still suffering the effects of jetlag and post-tour fatigue. The band embraces the shoegaze tag that has trailed them since their inception in 2009, a tag that has no doubt helped to build their fanbase in England, where the style took root back in the late ’80s.

“We always have a great time over there,” says White-Gluz, describing No Joy’s fanbase overseas as generally similar to that of North America, “just with different accents.” “There are some differences,” she notes. “I encountered a lot of diehard shoegaze purists, whereas I don’t really come across that here.”

British shoegaze trailblazers like My Bloody Valentine, Slowdive and Ride were big in England but relegated to cult status over here, overshadowed as they were in rockist circles by grunge and punk. Perhaps that’s why the recent wave of shoegaze revivalists has caught on here — it feels more fresh because we barely noticed it the first time around.

No Joy’s new record More Faithful feels more fresh too, with a number of songs diving into the melodic deep end of the shoegaze sound.

“We had previously always gone into the studio with rough sketches of songs and then fleshed them out and experimented,” White-Gluz explains. “For this record we really spent time writing and doing pre-production and we did small tours with the songs so we knew how to play them properly. And we tried to write more than we needed so we could fill an album with the best, not just what we had.”

Given how central guitar work is to shoegaze, it became the focus for White-Gluz and the band’s bassist Michael Farsky.

“Everybody was more involved (in writing and arranging) this time, and Michael and I spent a lot of time writing and coming up with guitar parts that were more complicated for us, so that it was a challenge to learn how to write it and how to play it. We just got bored doing the same thing.”

Though More Faithful was largely recorded at a New York studio belonging to the band’s label, Mexican Summer (their last record Wait to Pleasure was recorded there, too), it was wrapped in Costa Rica, and not during a sunny vacation.

“Our producer Jorge (Elbrecht) decided to leave New York on a whim, in the middle of when we were supposed to be recording. He was gonna go back and visit his family in Costa Rica so we decided to go with him and finish the record there. We built a little studio in his great grandparents’ farmhouse in the jungle on a mountain. There was no reception, and it was really isolated in the middle of nowhere, so we were kinda trapped. It was unfortunately rainy season, in mid- to late-October, so it was only sunny between 6 a.m. and noon and the rest of the day it was just a torrential downpour.”

The band spent 16 days in Costa Rica, with no Facebook (or Internet of any kind, though White-Gluz emphasized Facebook withdrawal) and no access to attractions/distractions that the country is known for.

“It forced us to work,” says White-Gluz. “We did 15 days of overdubs and mixing there, and went over every little detail. We had one day where we could go walk around and leave the isolated mountain we were on but luckily we didn’t get any vibes and start playing Latin music or something.” ■