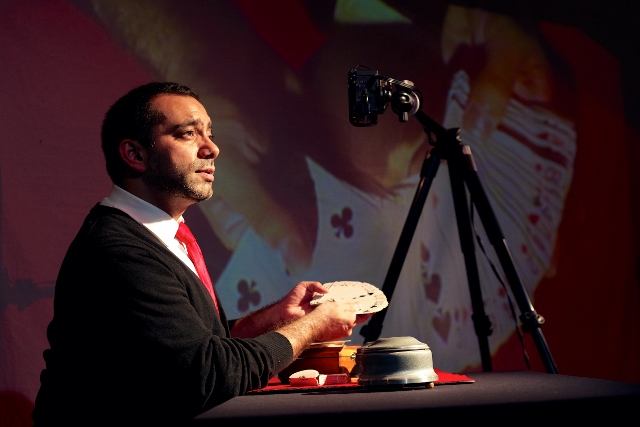 The Fringe Festival is in the fullest of swings, running strong through Sunday, June 21. The program is miles deep, so to help you out, our Culture Team reviewed seven shows that are ongoing this week (and keep your eyes on cultmontreal.com for a second batch, coming on Thursday):

“Someone is probably failing somewhere right now,” says Mark Jumper by way of introduction to Analysis of Failure. He takes his audience along into a seminar, or rather, an examination of why his creative project from a few years ago, the Bob Dey’s Tank Engine Man Project, flopped. While no one likes to be reminded of their failure, Jumper is happy to jump into the minutiae of why it sucked, or “failed to succeed.” The set-up has a retro, Wes Anderson-y vibe. Seated at a wooden desk scattered with odds and ends, Jumper is clad in an eye-catching outfit of lavender turtleneck, striped tie, funky blazer and round glasses. The pace is plodding, interspersed with long excerpts of music from the Project. But I liked the musical breaks, and Jumper has a wry knack for funny flourishes built on audience reaction. Thanks to the world wide web, we’ve come to embrace and revere fuck-ups, slapping a white letter label on any meme-y image, like a pole placed in the middle of the street, that can readily sum up a snafu. In the truly odd Analysis of Failure, Jumper reveals that it’s harder to actually try to understand your fails. (Sarah Deshaies) Studio Jean Valcourt du Conservatoire (4750 Henri-Julien), June 17, 18, 19, 20, 21, various times, $10/$8 students

When a comedian tells you he has a “bulletproof Holocaust joke,” you know he isn’t afraid to live on the edge. David Pryde’s Tête Offensive isn’t for the easily offended, but that’s true of plenty of great comedy. And judging by the number of Montreal comics sitting in the audience for Pryde’s first show, his peers think he’s pretty damn good.

But as Pryde himself points out, his critics don’t always agree. The bulletproof Holocaust joke was machine-gunned by three Montreal Gazette reviewers after he performed it at a Just for Laughs gala in 2004. You can read all about it during his Fringe show — he projects the reviews on a big screen — but the fact he’s telling the same joke 11 years later tells you the critical rebukes haven’t exactly kept him awake nights.

And if you can kibitz about the Holocaust, why not use your wry wit to discuss gays, religion, disabilities and race? Pryde does this and more with an intelligence that may well be lost on the fart-joke crowd, but which manages to skewer the very prejudice that a superficial analysis could ascribe to his act.

There’s lots of offensive comedy out there, but much of it offends your intelligence more than anything else. That’s not a complaint you’ll make after seeing Montreal home-boy David Pryde. (Peter Wheeland) Théatre Sainte Catherine, June 16, 17, 19, 20, 21, various times, $12

How Often Do I Dream

Written and performed by Katie Dorian, How Often Do I Dream explores the delicate, fragmented nature of human memory. A short and sweet homage to the performer’s late Omi and Opa, the piece draws on Dorian’s extensive research into memory and dementia to make sense of her grandparents’ illnesses and her relationship to them during their declines.

A charming and energetic performer, Dorian engages directly with the audience throughout, attempting to trigger our own memories in order to create a firsthand understanding of how memory functions. While this works well, it would probably be much more effective with a full house, which the show certainly deserves. With a small crowd on a Friday afternoon though, it left the impression that in a slightly longer time slot, the show could be a bit more substantive, and it’s clear that Dorian’s research is deep enough to do so.

Regardless, this sweet and oddly uplifting piece is the essence of why we Fringe: A quiet little gem of a show, from a talented performer who is just the right level of personally invested in the work, in a perfectly sized venue, creating an experience you would never get anywhere else. (Kristi Kouchakji) Black Theatre Worshop Studio (3680 Jeanne-Mance), June 16, 17, 18, 20, 21, various times, $12

The “inevitable” here refers to school shootings. Heads up if they, or guns in general, make you squeamish. If not, grab a nametag and find your assigned seat: you are a member of Miss Katelyn’s classroom at St. Martin Elementary, and today’s lesson is surviving a rampage. Beset by general anxiety and a host of personal issues, Miss Katelyn is determined to make sure her kids get the best preparedness course possible — even if the school’s principal doesn’t think they need it. Frantic and frayed at the nerves, Miss K walks her students through criminal profiling, bulletproof knapsacks and the principle of being vigilant. Playwright and performer Elena Belyea manages to poke fun at the darkest of subjects, providing a general meditation on surviving the inevitable, whether it’s a shooting or whatever life brings you. (SD) Studio Multimédia du Conservatoire (4750 Henri-Julien) June 15, 18, 19, 20, 21, various times, $12

Christian Cagigal is a master of the card trick, and of creating personal, whimsical moments onstage. Invited back to Montreal by Beyond the Mountain Theatre, the San Francisco-based magician has returned with a smaller, more intimate show — but in his words, it’s his most “adorable” to date. That’s because Obscura is simple: a series of fables and ghost stories, told through card tricks and sleight of hand. Cagigal is seated, shuffling his props around under a video camera; the action is projected onto the curtains at Montreal Improv. He covers medieval torture, gamblers, Mardi Gras, brushes with the Devil. The magic here lies within entrancing an audience with a deck of cards, some stories and a wink. (SD) Montreal Improv (3697 St-Laurent), June 17, 18, 19, 20, various times, $12/$10 for students, seniors and Satanists

The Shiner by Thunder Blunder

In The Shiner, storyteller and comedian Katie Leggitt (organizer of the Hey Gorgeous Women in Comedy nights at Théâtre Ste-Catherine) seamlessly switches across a range of characters as diverse as a child dealing with loss, a hilarious over-the-top coach with an unhealthy obsession with Star Trek and a pretty normal adult — a “spiritual animator” whose job it is to help guide school kids through the process of growing up. This is in fact, Leggitt’s day job in real life, so it’s no surprise that her portrayal of the animator is brimming with sincerity. Her spot-on embodiment of the little girl who loses her dad, employing childlike mannerisms like tugging at the hem of her top with downcast eyes while struggling to explain her sadness and anger to a grown-up, reveals a person who clearly pays close attention to the young charges in her care.

The Shiner is equal parts funny and touching, reminding the audience to look at the world through the fresh eyes of a child while recognizing that children are in no way immune from the worst kinds of human suffering. As Leggitt tells the stories of helping kids deal with their lives, you just might find that the nuggets of wisdom she offers them could also turn out to be the gold stars you need in your own grown-up life for surviving another day. (Lisa Sproull) Montreal Improv (3697 St-Laurent), June 17, 18, 20, 21, various times, $12/$10 for the under- or un-employed

The reception of orgiastic cheers from devoted fans that greeted Tranna Wintour as she broke through the cherry red velvet curtain at the Wiggle Room before she’d even said a single word told me I’d be in for a good show, and Wintour did not disappoint. The comedienne, dressed in head-to-toe sequins and eyeliner, is as glamorous as she is funny, drawing all eyes to her as she took the crowd for a ride through her online dating profile (and related stash of dick pics), suspenseful tales of Diva encounters, and flashbacks to her childhood complete with inspired tributes to Paula Abdul and Mariah Carey.

Though it’s notoriously difficult for performers to get an audience to do anything but sit there with folded arms, Wintour’s easy amiability and spontaneous engagement with the audience meant it wasn’t long before the crowd was swaying the venue’s tabletop candles in the air and singing along with the hilarious musical interludes that peppered her set. Naturally you can expect to hear a few jokes about the joys of dating while trans, but most of Wintour’s reflections are totally relatable stories about growing up and finding yourself, putting your best face into the world (even if you got there on the Greyhound), looking for love, and a bit of celebrity gossip thrown in for good measure. (LS) The Wiggle Room (3874 St-Laurent), June 16, 18, 19, 20, various times, $12