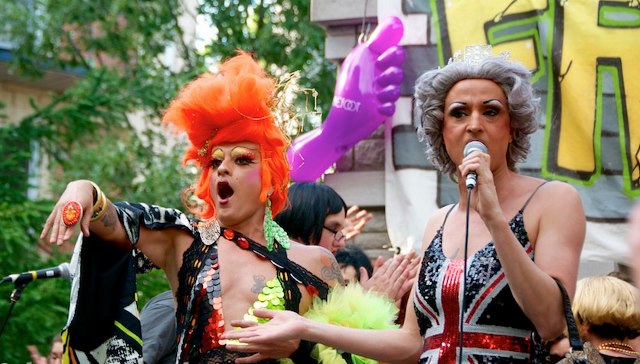 The Drag Races first took place during the 2001 edition of the Fringe, as a way of making sure that the festival got maximum publicity after the Grand Prix dates shifted to coincide with its opening weekend. Essentially an exercise in absurdity and hilarity, the races (now a beloved Fringe tradition) see Fringe artists, staff, volunteers and jury members compete against a team of professional drag queens from Cabaret Mado in audience makeovers, mixology, running a tire obstacle course in heels while carrying a drink on a tray and, finally, lip-syncing to randomly selected diva anthems.

According to infamous former Fringe producer and Drag Races instigator Jeremy Hechtman, the publicity stunt worked, landing the festival on the front page of The Gazette on a weekend that was otherwise all about cars and capital. “You can never go wrong with drag queens,” he explained.

Hechtman says he was inspired by a former Sydney Fringe producer’s tale of a one-off drag race, in which drag queens literally ran a 100-yard dash on the beach in heels. Having sat on the idea for a couple of years, the shift in Grand Prix dates seemed like the right time to expand on the concept and enlist Mado Lamotte, of Cabaret Mado. 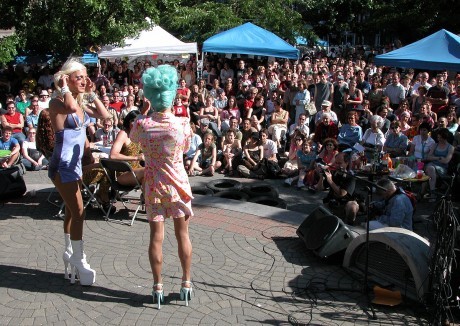 Mado & co. at the Drag Races

Mado, Drag Races Host in Perpetuity, remembers being unsure that the professional drag queens would be willing participants. “When Jeremy first showed me the concept, I was like, ‘Oh really? Are you sure it’s going to work, drag queens running through tires?’ In those days I was like, my drag queens are not going to want to get dirty like that (…) But then I asked them if they wanted to participate, and there were more contestants than I could hire.”

Hechtman, for his part, recalls having to work to convince Fringe artists to participate at first. While many contestants still need a bit of liquid courage to really get into the spirit of things, the days of heavy recruiting are over: Hechtman maintains that there was a waiting list towards the end of his tenure, while Sophia Wright, the current Fringe events coordinator, says that interested parties from all spheres of Fringe life now contact her and the non-professional team “comes together more or less on its own.”

The contestants have historically been as varied as the Fringe entourage itself, with some performers effectively playing themselves, and others going well beyond the drag stereotype, such as 2006 runner-up Lenore Lovecraft (a personal favourite). Group acts have also successfully competed in the past, with Japanese duo Shoshinz’s drag kings as well as a very large Brünnhilde duetting “with a tiny drag queen named Dream (…) playing with her like she was a puppet” among Mado’s favourite entries over the years.

“It’s always nice to have a drag king,” Mado says. “Or maybe a family — I would like to have a family of five people participating as one.”

Despite Mado’s claim that at “29 years old, it’s hard to recover memories from that far back,” both Mado and Hechtman can only recall the races ever being affected by rain once, in their very first year, when they were simply rescheduled for the second weekend and have stayed there since. Almost miraculously, there haven’t been any other major bumps in the road, although ask Hechtman about the contestant that most sticks in his memory and you’ll be regaled with a story about a drag queen who simply squatted and peed in one of the tires mid-race.

What started as a publicity stunt has now become so much a part of the Fringe, and such a draw as an event unto itself, that even Fringe Park detractors have been spotted enjoying the festivities.

“That’s the thing,” Mado says. “Drag Racing should be something that reunites people.” ■