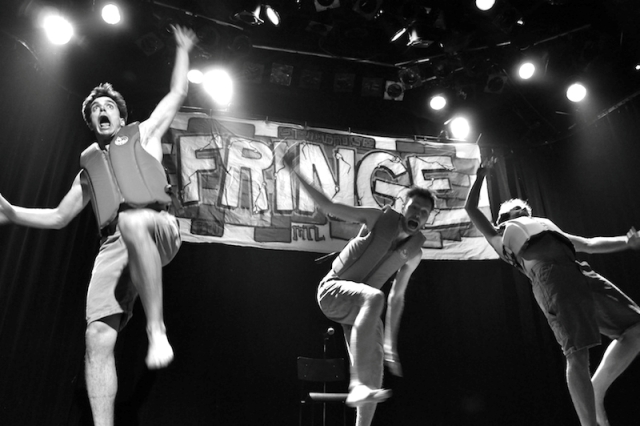 Uncalled For hosting the Fringe-for-All, 2011

Montreal musician Commander Clark (who made the Top 10 Freakiest Local Act list in this year’s Best of MTL readers poll, incidentally) is behind a 10k bike trek he’s calling the Tour de Taco Bell. (He just wanted to bike to the Taco Bell south of Ahuntsic and made a thing out of it. See the details here.) 353 Fairmount to 1595 Côte Vertu, 12–2 p.m.

Furco will be the site of an Underground Chef Battle, pitting le Chien Fumant’s Maksim Morin against SuWu’s Antony “Tony Bacon” Nassif. DJ CFCF provides the soundtrack, and the ticket price includes one beer and entry into a draw for prizes. 425 Mayor, doors open at 6 p.m., battle at 8 p.m., $20/$25

The Fringe Festival is coming! Get a feel for what almost all participating local companies and performers have in store for this year’s 25th edition at the Fringe-for-All, a dizzying parade of two-minute live previews, hosted by Al Lafrance and Cat Lemieux. Bring beer money. Café Campus 57 Prince-Arthur E., 7 p.m., free

Best-selling author and former CIBC chief economist Jeff Rubin speaks about his new book The Carbon Bubble: What Happens to Us When It Bursts?, an analysis of Canada’s economy and oil assets in the context of the global divestment movement and climate change. Frank Dawson Adams Building (3450 University), 7–9 p.m., free