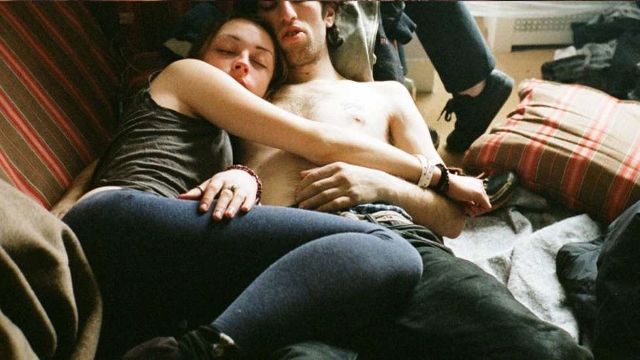 Most people’s entire understanding of junkie culture and drug addiction comes from movies. Unless you’ve lived with addiction yourself, your image of it is likely shaped by films like Trainspotting or The Panic in Needle Park, all dirty fingernails and guttural screaming on filthy linoleum. I haven’t the slightest idea how accurate these depictions are, but Benny and Josh Safdie’s Heaven Knows What has the benefit of being based on the life of a real addict (star Arielle Holmes, whom the Safdies befriended when she was essentially living on the street) and using mostly non-professional actors from that world. Verisimilitude has often been mistaken for gratuitous ‘edge’ and grittiness in films set in this world, but that’s not the case with Heaven Knows What.

Harley (Holmes) lives on the street with her sometimes-boyfriend Ilya (Caleb Landry Jones) and an ever-evolving crew of other drug addicts that include sensitive dealer Mike (Buddy Duress — currently doing time in Rikers on drug-related charges) and the volatile Skully (rapper Necro). Ilya and Harley’s relationship is impassioned, to say the least, but when the film opens he’s skulking in the public library, watching Burzum videos and shutting Harley out completely, which then prompts Harley to attempt suicide by slashing her wrists with a razor blade. Released from Bellevue with Ilya nowhere to be found, she returns to her life of spanging (ie. begging for change) and scoring.

The Safdies take a loose, if not exactly docudrama-like approach to the narrative, letting scenes unfold without much perceptible blocking or mise-en-scène. There is barely a sense of narrative in the conventional way, and a lot remains unsaid throughout (I must say that the few times that the Safdies do indulge in convention are also the film’s weakest spots.) The film is particularly attuned to the rhythms and patterns of the conversations between Harley and the people she meets, which are often rambling bits of nonsense half-heard by the people who are meant to be listening to them. They understand when to make something harrowing and when to make something feel commonplace; a scene where an addict desperately tries to thread a needle is just as skin-crawling as the multiple scenes of people shooting up (a much more common occurrence in their lives than mending a jacket). A film about junkies living in New York isn’t inherently original, but one where the addiction is treated as just another bit of routine stands out.

The film brings to mind the aforementioned Panic in Needle Park, where Al Pacino and Kitty Winn played an equally volatile couple of users in NYC, but Heaven Knows What shows characters pushed even further out (if that’s even possible) to the margins of life in New York. It’s a little hard to imagine a gritty film about drug addiction happening in the slick, $4,000/month-studio New York of 2015, with its crossfit gyms and Chipotles on every corner, but the Safdies capture the seamy side of the city without dipping into clichés.

The premise of using non-professional actors (except for Landry Jones, who stepped in to replace the real Ilya when he proved too unpredictable) is a gamble. It can produce greatness, but it can also fall completely flat — Robert Morin used real-life junkies for his 1998 film Quiconque meurt, meurt à douleur and some of the performances in that film are straight-up Christmas-pageant terrible. Thankfully, Holmes is a natural, devoid of that self-awareness that non-professionals sometimes have, and stunningly at ease in her surroundings. Considering that it’s impossible to separate Holmes from the material, it’s hard to say if she’s going to go on to greatness, but even if her career was only Heaven Knows What, she’d have had a hell of a career. ■