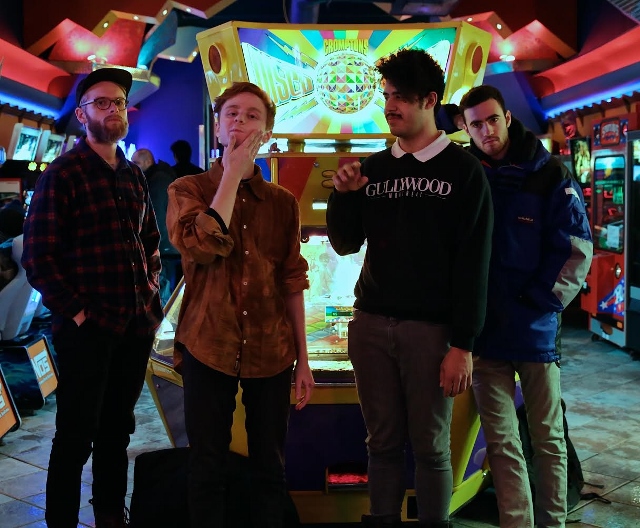 The Stack Your Roster crew is living autonomously. They’re a local label with an unofficial venue and recording space that struck it out on their own because they didn’t necessarily fit in with other scenes. And these days, they’re thriving.

“We had a rave at our space until 4:30 in the morning last weekend,” says Stack Your Roster cofounder David Mitchell, whose band Gulfer will launch their passionate, ferocious and technically proficient debut long-player What Gives? at the newly relocated Turbo Haus in St-Henri on Saturday. “We had no complaints.”

Stack Your Roster HQ is located in a back alley off the Main, near a classy furniture store. Walk 20 feet down the correct alley and you’ll come upon a solitary house, unattached to any other buildings. It’s in the basement where they record and hold parties.

“We’re trying to improve the spot slowly and get a PA,” says Mitchell. “We’re doing shows more than ever because two-thirds of the people who live in the house are Stack Your Roster founders. We’re on the same wavelength about what we want to host.

“We especially want to do things in the summer. It gets very cold down there in the winter, to the point where it’s almost impossible to play.”

What Gives? comes following a split, and EP and two 7” releases. It was recorded not at their HQ, but at a location they can’t disclose because they did it covertly. Rest assured, it sounds professional — like a big label turn of the century post-hardcore, math rock or emo offering. Gulfer, which includes Vincent Ford on guitar and vocals, Simon Maille on drums, Steven Whiteley on guitar and Mitchell on bass, aren’t necessarily revivalists, because that would imply they’re riding a soon-to-be-crashing wave.

“There was a five year period, between 2006 and 2011, when it was hard to feel like you could enjoy those records, but now it’s come to the point where it’s okay. The records had their time and place and shouldn’t be discounted because they were associated with some uncool trend,” Mitchell says. “I feel like we’re past caring about things like that.”

Hardcore is another loaded term Gulfer would like to avoid. On the other hand, they’ll proudly stand behind math rock.

“We have the technical, shredding thing going on,” Mitchell says. “Some people think our music is overly complicated, but then the technical crowd will say we’re not complex enough, so we’re trying to find a middle ground.”

Stack Your Roster emerged over three years ago because there was a collective of likeminded musicians without a scene to call their own, but the label was also formed because their works were getting lost in the Internet ether.

“We had all these friends making really cool music and they would just put their music on a Bandcamp and that would be it. No one was helping them find press or make physical copies. We wanted to create a hub for our friends. Once you can associate something with an entity, then maybe it increases the familiarity,” Mitchell explains. For now, they’re selling their music as downloads, as well as homemade CDs and tapes, but they’re looking to get into vinyl releases.

There’s plenty of math-y rock on Stack Your Roster coming from the likes of Girl Arm, Great Gardening, Quaaludes and Stevenson, but they’re also not afraid to throw the odd curveball, like the harsh electronic works of Bufflo. Mitchell is preparing to release an album of bedroom laptop music done with fellow SYR cofounder William Osiecki.

“Yes, and I’m extremely happy and proud of that fact,” says Mitchell. “That encompasses everything we’re trying to do within our weird niche.” ■