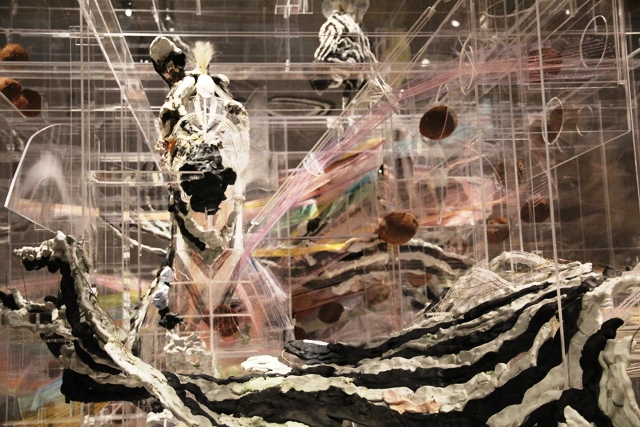 From Flux, by David Altmejd. Photos by Lisa Sproull

“People have the right to whatever they feel about art,” states David Altmejd to a group of reporters gathered at the MAC last Thursday. The celebrated contemporary artist was present at a preview of his new show Flux, running alongside a parallel exhibit by fellow Montreal-born artist Jon Rafman.

David Altmejd is lamenting the feeling of defensiveness that can set in for visitors to contemporary art exhibitions, that which may keep some people away from the gallery altogether. “They have this idea that contemporary art is meant to communicate a very specific meaning and if they’re not able to get that meaning, it means they’re stupid — and who wants to feel stupid?” He goes on to say, “I just wish that people were able to approach art without that feeling of defensiveness and that viewers were more confident about their own judgement.”

Consider Altmejd’s words as a personal invitation to visit the MAC this summer to see two solo shows by two major Montreal-born artists whose work you’re very likely already familiar with. “The Eye,” Altmejd’s surreal winged statue with dozens of interlocking fingers for a face, has graced the lawn of the Sherbrooke Street Bourgie Pavilion of the Montreal Museum of Fine Arts since 2012, and Rafman’s The Nine Eyes of Google Street View made waves when the collection of revealing screenshots from the ubiquitous mapping service was launched in 2009. 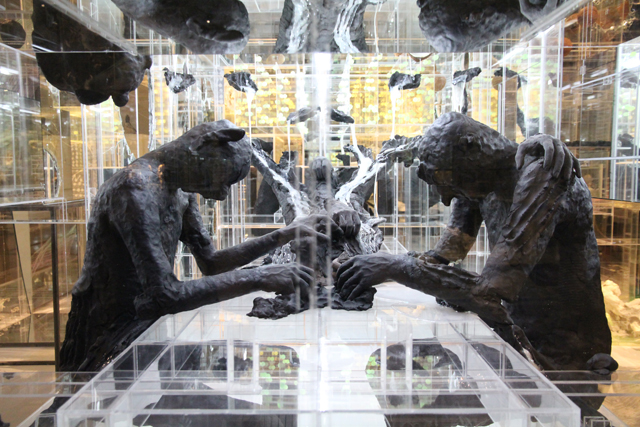 Flux, a retrospective exhibition covering 15 years of work from Altmejd, presents sculptures, many on a massive scale, that combine the human with the animal, and the physical with the fantastical in spectacular arrangements involving giant plexiglass structures and large mirrors that give the viewer the strange feeling of being both separate from and projected into the works.

The sculptures can be grouped into two subsets: on one side, surreal models of heads and human-like figures, made from materials as diverse as plaster and wood to polystyrene and clay. Heads with two faces converging, empty spaces or objects like coconuts or minerals where faces or torsos would be, and human-shaped figures with animalistic features like the head of a bird of prey or the allover body hair of a yeti add to the dreamlike (or at times, nightmarish) quality of the works.

In the other category is a series of enormous, incredibly detailed three-dimensional snapshots suspended in massive plexiglass grids. I say snapshots, because though these are static sculptures, everything about them communicates movement — reaching arms whose paths are illustrated by arcs of surplus extremities, shooting streams of tautly pulled bands of threads that course through the installations like firing synapses, and figures frozen mid-stroke in the process of sculpting their own bodies. Coconuts, pineapples, grapes and branches (some with cheeky personalities of their own) add to the garden of delights of Altmejd’s exhibit. The characters contained in plexiglass, fantastic as they are, are brought down to earth by their placement inside the orderly structures.

Other works further emphasize symmetry and balance, such as the intricate and delicate web of gold chains in an untitled 2005 sculpture, or in the geometric precision of the 2004 piece The University 1, a hive of hollow, mirror-edged cubes that sort of resembles Moshe Safdie’s Habitat 67, if the Montreal landmark were made from disco balls.

Altmejd’s work has been described in terms of connectivity via the relationships between the body and its surroundings of architecture and the natural world, between outer experience and inner consciousness, and the energy that transforms perception into ideas. These themes form the beating heart of the exhibition, where extraordinarily imaginative bodies burst forth from a dream world born of the earthly physics and biology of one elegantly organized human brain. ■

Flux by David Altmejd is on at the MAC (185 Ste-Catherine W.) through Sept. 13. For more on David Altmejd, please visit his website.