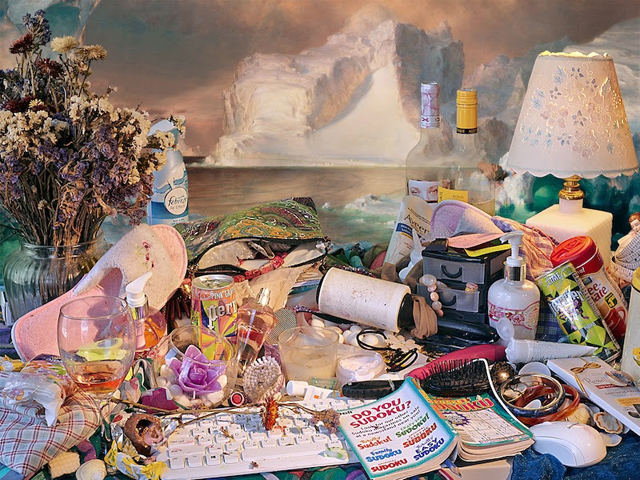 Though many galleries take a bit of downtime in the summer, there’s no sign of slowing down for Montreal’s arts scene with another busy week buzzing with activity over the next few days.

Several shows and special events are happening tonight, Thursday, including Habiter l’école et ses habitants by artist-in-residence Julie Laurin over at Articule. During her residency, Laurin worked with third-graders at an elementary school, looking at the dynamics between child and adult, and insider and outsider within the school space. The vernissage will include performances by Laurin, Jean-Philippe Luckhurst-Cartier and Nicole Panneton.  262 Fairmount W., Thursday, June 11, 7 p.m.

At Aux Vues, you can see Skyporn, a group show of three photographers, Véronique Buist, Alain Lavergne and Geneviève Moreau whose images will have you looking up, waaaay up. 783 Bienville, Thursday, June 11, 5 p.m.

Head to Hochelaga for Projet HoMa III: La Collecte, a group show at the Maison de la culture Maisonneuve featuring artists like Marc-Antoine K. Phaneuf and Simon Beaudry, plus a performance of Rituels by Christine Comeau, choreographed by Marjorie Dunlop-Brière and with a soundtrack that includes music by Tanya Tagaq. 4200 Ontario E., Thursday, June 11, vernissage 5 p.m. with performance at 6 p.m., free

If you tried to go to Galerie Elektra to see Elektra Festival: Coincidence Engine One: Universal People’s Republic Time by [The User] (Emmanuel Madan + Thomas Macintosh) based on my recommendation last week, you might have been disappointed, because the opening date had to be delayed. Check back anytime now, because the exhibit is open as of today, with a special finissage planned for June 25. 5455 de Gaspé, #104, Tuesday–Saturday, 12–6 p.m.

Speaking of graff art, the Mural Festival is still ongoing, so if you haven’t taken a walk around the Plateau yet to check out the murals as they’re being created, why not make some time for it today? While you’re in the area, stop by Station 16 to see the Red Bull Curates Canvas Cooler exhibition featuring coolers that were painted earlier this week by some of Mural Festival affiliated artists including Chris Dyer, MC Baldassari and Jarus. 3523 St-Laurent, Friday, June 12, 6 p.m.

From there, head north on the Main for the 1-year anniversary party of Galerie C.O.A with DJ Bijou. If you haven’t checked out this gallery yet, trust me, it’s worth it. Friday’s event will display some of the works that were at last weekend’s Deserres Art Fair on the Mural Fest grounds, so if you missed that event, here’s another chance to see work like smoke drawings by Spazuk and rifles made from old typewriter parts by Éric Nado. 6405 St-Laurent, Friday, June 12, 7 p.m.–midnight

The highlight of the week is going down Saturday afternoon at Griffintown’s Galerie Antoine Ertaskiran with their summer group show Playlist. Check out this vernissage for a chance to see James Kerr’s augmented reality GIFs (recently published in book form by Anteism Press with pages that spring to life when viewed through a mobile phone app) plus works by Jon Rafman, who was just shortlisted for the Sobey Art Prize for his work that explores the impacts of the digital age on our selves. 1892 Payette, Saturday, June 13, 2–5 p.m.

In the Village, check out Life Is Good, a retrospective of urban pop-art by Keithy Antoine “LadySpecialK” at Galerie D that will feature a performance by Queen Ziyah. 1200 Amherst, #102, Saturday, June 13, 5 p.m.

Back in the Plateau, a new concept for supporting artists is being executed at White Wall Studio. For the group show Centerfold II (held in conjunction with Mural Fest), visitors make a PWYC donation at the door, and once inside are encouraged to vote for up to three of their favourite works. At the end of the night, the door revenues are split between the artists on the basis of how many votes their works received. 4532 Laval, Saturday, June 13, 7–11 p.m.

After all that, close out the weekend at the vernissage for the group show Major Tom at Le repaire des 100 talents, featuring spaced out works by Airelle, Marmo, Sylvia Meillon and more. 5867 St-Hubert, Sunday, June 14, 4:30–9 p.m.

Don’t forget to check the full listings below for even more shows to see this week!

An Annotated Bibliography in Real Time: Performance Art in Quebec and Canada

A Symphony of Talent – Group Show

Lessons in Pipe Dreaming and How to Facilitate Future Living

Waters Upon the Earth – Jennifer Meanley