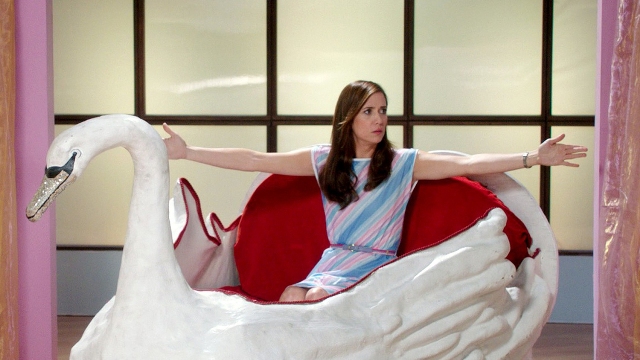 Kristen Wiig in Welcome to Me

A seasoned theatre director and teacher in Los Angeles, Chicago and New York, Shira Piven only has a few film credits to her name, but her new movie Welcome to Me has the lived-in feel of the best dramedies. Kristen Wiig stars as Alice Klieg, an eccentric woman with borderline personality disorder who spends most of her days watching garbage television and buying lottery tickets. When one of the aforementioned tickets pays off (to the tune of $86-million), Alice has unlimited resources to live out her wildest dreams, which involve moving into a casino hotel and blowing all her money on purchasing airtime for herself on a deteriorating paid-programming channel. The resulting show (titled Welcome to Me) sees Alice working through her various issues as well as making a meatloaf cake and neutering a dog on live TV. We spoke with Piven a few days before the film’s opening in Montreal.

Welcome to Me began as a television pilot written by Eliot Laurence, a former improv student turned collaborator of Piven’s. “Eliot mentioned he had written a pilot script that I should read. As soon as I read it, I was hooked right away,” she explains. “I told him, ‘I might be giving you terrible advice, but I think this is a screenplay and I’d love to direct it.” While the film wasn’t written specifically for Wiig, Piven says she immediately came to mind. ‘There aren’t many roles that are this complex and interesting for women,” she explains. “Kristen was the person we were waiting for.”

“From the beginning I knew I needed to find someone who loved it as much as I do because that was going to move it to the next level,” Piven says. I mention that while the film is one of Wiig’s more dramatic projects, it isn’t as much of a radical departure as something like Punch-Drunk Love was for Adam Sandler. It turns out that the Paul Thomas Anderson film was a touchstone for Piven (as was Scorsese’s The King of Comedy). “I feel like Punch-Drunk Love is the closest movie in tone to this movie,” she says. “No two movies have the exact same tone but I feel like Punch-Drunk Love and King of Comedy are in the same ballpark.”

I ask Piven if the balance between the film’s comedic elements and the heavier aspects of the character’s mental illness was a difficult one to strike when directing the film. ‘‘As a theatre director, your job is first and foremost working with actors, and my strength is an interpretive one where I fall in love with material and then I want to bring out as much as I can for that material,” explains Piven. “For me, the tone was all in the script. The tone of the movie comes from trying to create a reality. (…) A friend and theatre mentor of mine recently said ‘We laugh out of recognition.’ It’s not that it’s necessarily that funny, but it’s recognizable to us.’

One of the film’s strengths (and one that it shares with the aforementioned Punch-Drunk Love) is the way in which it treats Alice’s mental illness in an even-handed way, never writing off her very real problems as quirks, but finding humour in the specificity of her obsessions — one segment on her show is titled Someone’s Been Tampering With My Makeup Bag, for example. “It was important for us to create a character that was very respectful to mental illness, that was someone we could recognize and that we’re never laughing at her and always had a sense of compassion for her.” ■

Welcome to Me opens in theatres on Friday, May 22. Watch the trailer here: