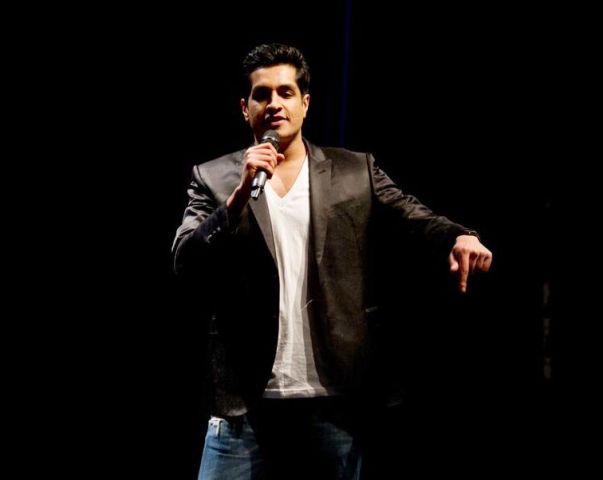 From the hard-hitting school of stand-up comedy that produced alum like Eddie Murphy and Chris Rock, Sugar Sammy has learned how to deliver punches with his punchlines, dodge the blowback and come out a star.

After 20 years in the stand-up game, the 39-year old comedian has performed 300 bilingual comedy shows in Montreal and across the province since 2012, establishing himself as a stand-up powerhouse. The Québécois crowds love him (for the most part — more about that later), a considerable feat for an anglo born Samir Khullar to Indian “allophone” parents in Côte-des-Neiges, and nicknamed Sugar Sammy by ladies he tutored in university and scored free drinks for at McGill frat parties.

In the first week of May, I got an opportunity to speak to the man behind the groundbreaking French and English show at Olympia, on a stage where he’s performed hundreds of times, about the hyper-local social and political commentary in the You’re Gonna Rire show and its touring counterpart, En français SVP.

“I was living every day (bilingually) anyway, ’cause I have as many francophone friends as I do anglophone friends,” says the “child of Bill 101.” “I had all this local material that I could never do on tour and I would throw it into sets in Montreal and nowhere else, and I thought to myself, ‘Why don’t I take all this material, write some more really local stuff and then just build a big show around it?’ I felt like there was an audience for it and that it deserves a real platform, rather than just an afterthought in a stand-up routine.”

Sammy doesn’t merely address controversial issues like Quebec’s language paranoia, sovereignty movement and Islamophobia, he expresses strong opinions, skewering nationalists and racists even if they’re right in front of him, scowling from the audience. (That said, he’s an equal opportunity roaster, mocking people of many races, religions and genders — even I was a little put off by the bit he did about what he looks for in a wife.) Some of his jokes, even the promotion of his shows (one poked at the Office Québécoise de la langue française), have attracted vandalism, social media haters and even death threats.

“I like pushing buttons,” Sammy says. “I like going where other guys haven’t gone, I like exploiting the taboos and talking about them. It’s fun to play with fire and always end up getting away with it in the end, but it does get  me in trouble all the time. I think any art form that sparks conversations is good — it makes us progress. When you can laugh at something, it gives you permission to have a conversation about it again, and that’s fun. That’s liberating.”

“Even now that it’s over, a year later, there’s still tension around that — it marked us in a way that’s gonna take a while to put behind us,” Sammy says. By now, he’s had plenty of practice assessing the crowd and, if necessary, diffusing tension and resetting the mood in the room. “You kinda gage it, you feel it — it’s a dance with the audience. Even when I push the line, I always address the fact that I just did, so if there’s a tense moment, you’re able to power through it by addressing the fact that it became tense. It could be very simple, like Will Ferrell’s ‘That escalated quickly.’ Just that will make people laugh.”

Charm is part of Sugar Sammy’s schtick, and perhaps that’s reflected in his consistent popularity with Cult MTL readers, who voted him into four categories in the Best of MTL poll this year. The ranking that surprised him most was #7 Best Actor, a nod to his costarring, bilingual role in Ces gars la, a V channel TV show that has further cemented his celebrity status in this province.

“Now that’s a surprise,” he says. “It was my first experience as an actor!”

He was also voted #4 Best TV Personality, #3 Hottest Man and, for the third consecutive year (so no surprise there), #1 Best Comedian.

“It’s great! It’s fun to see that the anglophone audience loves the show as much as the francophone audience. I’m still getting love from both sides!” ■