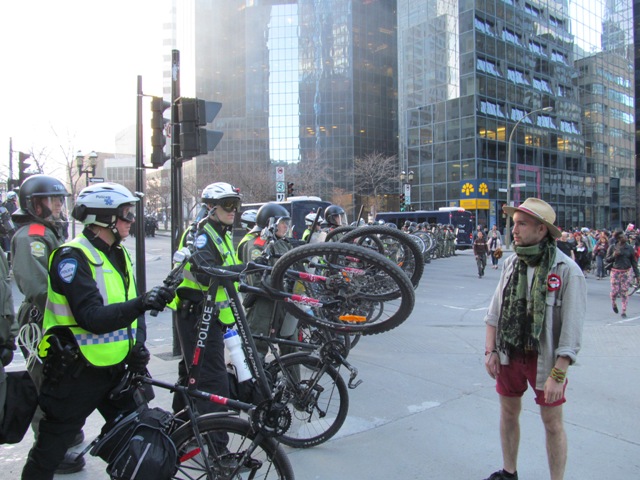 A wall of bike cops and SQ riot police force protesters to turn south onto McGill College minutes before tear gas was used to disperse the march on Friday, May 1. Photos by Peter Wheeland

Our fair city has been invaded by roving bike gangs that ride around terrorizing citizens, tearing through the streets in military formation, stopping only to circle groups of random pedestrians. Wearing bright yellow vests, they use their black, stripped-down bikes as barriers, shields and weapons to intimidate their targets.

One such gang cornered 20-year-old Xavier Amodeo last Friday. While other gang members stood guard, three of them grabbed Amodeo. Two of them held him while a third punched him three times in the face and, after the skinny youth was wrestled to the ground by the pair of enforcers, the leader gave him one final kick in the chest.

You can watch the whole thing here. After the video of the incident went viral Monday, gang spokesperson Ian Lafrenière said “We don’t know at this moment, was it appropriate or not.” In some instances, he told CBC, it’s acceptable for a Montreal police officer to punch someone in the face when making an arrest.

Commander Lafrenière, the public face of the Service de Police de la Ville de Montréal, said we don’t know what happened before the tape started rolling. Unless Amodeo was hiding a pistol in his nose, however, there’s nothing that justifies one cop going all Floyd Mayweather on a skinny kid being held by two other SPVM officers. And the coup de grâce, the coup de pied delivered while Amodeo was on the ground, is all the evidence you need that this is simply a case of a Montreal police officer who lost his cool and started beating one of the citizens he is sworn to protect.

There’s a lot of confusion and misinformation about what happened last Friday because there were actually three separate May Day marches that some media reports have blended together into a Kafkaesque cocktail. I contributed myself to that mess in an earlier version of this column when I cited a CKUT report that said 447 protesters had been arrested near city hall. This was true, but it happened at the 2013 May Day protests. (I had listened to an old interview without noticing the date. It’s surprising how similar the circumstances were.)

Anyway, this year’s march was ostensibly organized by the Le Front féministe prolétarien révolutionnaire, but there had been a broad public invitation to attend the 6:30 p.m. rally and so the crowd of about 1,500 that gathered at downtown Phillip’s Square was very diverse and was composed mostly of students, union members, anti-austerity activists, etc.

The violence in this case, I can personally testify, was initiated by Montreal police at 7 p.m., when the organizers tried to start the march. Seconds after moving north toward Aylmer Street (they were eventually supposed to join up with two other protests), the lead contingent was pepper-sprayed just a few metres from where I was standing. Heavily armoured Sûrété du Québec riot police were also massed at the two southern corners of the park, so the confused and angry crowd was then funnelled north-west up Union Street, the only open path.

When the marchers reached de Maisonneuve Blvd., police had already blocked off all but one option: west toward McGill College, where a wall of SQ and SPVM bike-gang members turned the crowd back south toward Ste-Catherine. Minutes later, the leading edge of the manipulated protest march, which included delegates from the CSN labour union,  was tear-gassed by waiting tactical squad officers.

As clouds of gas wafted up McGill College, many of the hundreds of people trapped on the pedestrian mall tried to retreat indoors, only to find that the doors on both sides of the mall had coincidentally been locked.

If you wanted to provoke a riot, it’s hard to imagine a better plan: Start by frightening people, then force them to follow a pre-determined route and gas them when they get to your intended ambush spot. Do this in the heart of the city (the crowd could just as easily have been directed north to the McGill ghetto) when hundreds of people are out shopping and strolling.

The amazing thing is that the crowd remained relatively calm. All police managed to do was disperse the crowd into dozens of groups that scattered across the downtown core, initiating a silly game of cat-and-mouse for the next few hours. Again, isolated reports of smashed windows and general mayhem were exaggerated to justify the massive police action aimed at breaking up a march that, had it been left alone, would have likely petered out peacefully like all the other marches that day — and the hundreds of marches this city has seen in the last three years.

The army of heavily armoured police that turned downtown Montreal into an occupation zone on Friday was a solution in desperate need of a problem. The only “threat” to public order was the usual small gangs of black-clad youths that hang out on the margins of every demonstration. I mean, honestly, how hard is it to keep track of trouble-makers who wear uniforms and travel in packs?

(No, this time I’m not talking about the cops.)

But as incidents like the Amodeo assault show, we definitely should be doing a better job of monitoring police interactions with citizens. In the United States, where police killings of unarmed citizens are constantly in the headlines, the Obama administration is providing federal money to distribute 50,000 body cameras to police forces around the country. Presidential hopeful Hillary Clinton said last week that she wants every force to be equipped with video-recording devices. “That will improve transparency and accountability and help good people on both sides of the lens.”

In two weeks, Toronto is beginning a one-year pilot project involving 100 officers who will be equipped with body cameras that they must turn on whenever they are responding to a call. This, too, was sparked by a police killing, this time of 18-year-old Sammy Yatim in July 2013. The incident was recorded at a distance by a citizen, evidence which helped lead to second-degree murder charges against the officer who shot Yatim eight times.

Up-close video evidence would have come in very useful in determining the facts involved in several Montreal fatal police interventions over the years, including the death of  the mentally ill Alain Magloire on Feb. 3, 2014, a case currently undergoing a coroner’s inquiry.

Video will be extremely useful in other circumstances as well, providing potentially definitive evidence of guilt or innocence in alleged crimes witnessed by police, from traffic stops to obstruction of justice. And studies have shown the mere presence of recording devices has significantly reduced the number of reports of excessive force in some jurisdictions, either because police are on better behaviour or potential complainants back down once they realize the incident was recorded.

The use of police body cameras is not without controversy, with questions of privacy for both cops and citizens foremost in the minds of many critics. But these are hardly insurmountable problems, as many jurisdictions are proving. In any case, from the public perspective, most observers agree the benefits of body camera programs clearly outweigh the risks. Even the American Civil Liberties Union is on board in the U.S., provided specific safeguards are in place.

“For the ACLU, the challenge of on-officer cameras is the tension between their potential to invade privacy and their strong benefit in promoting police accountability. Overall, we think they can be a win-win — but only if they are deployed within a framework of strong policies to ensure they protect the public without becoming yet another system for routine surveillance of the public, and maintain public confidence in the integrity of those privacy protections.”

Montreal police have been mulling the idea of adopting body cameras for well over a year now, with Lafrenière himself making the case to CBC last January. “We believe at least that both sides of the story will be broadcast if something happens. It will be possible to react to this — to show both sides of the story,” he said.

We couldn’t agree more that Montrealers deserve all sides of the story. Body cameras will provide pictures and sound that are missed in spontaneous recordings by random citizens. As long as the technology is used to ensure accountability and not to spy on citizens, as the ACLU says, body cameras are a win-win idea.

I still doubt, however, that any kind of recording will convince us that punching someone three times in the face is an “appropriate response” to subdue an unarmed protester. ■