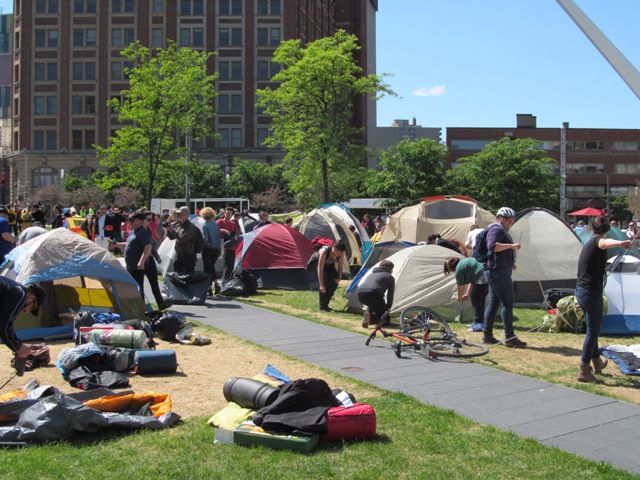 Tent city in downtown Montreal, May 21, 2015. Photos by Peter Wheeland

One in 10 Montreal tenant households spends 80 per cent or more of their income on housing. One in five spends more than half their revenue on rent, 40 per cent spend more than one-third of their cheque on housing, the oft-cited measure of a “reasonable” proportion of income to devote to shelter.

Almost 285,000 Montrealers, by that measure, are spending too much on housing, and it’s not because they’re subletting condos in Westmount. With subsidized and social housing in short supply, affordable housing often means renting in buildings infested with bugs, mould and crumbling infrastructure. It means living in areas plagued by high levels of noise and air pollution, poverty and crime. It means cramming a family of four into a one-bedroom apartment and signing over most of a welfare cheque the moment it clears the bank.

And while politicians in Quebec City debate how much of a salary increase they’re going to give themselves this year, targets for social housing are being cut in half (just 1,500 for Montreal) even as the number of impoverished households continues to increase.

As part of campaign to fight for 50,000 more Quebec social housing units that has been a year in the making, today marks the start of a tent camp in downtown Montreal organized by the Quebec tenants’ rights group FRAPRU (Front d’action populaire en réaménagement urbain). Even before a single tent peg has tapped into the ground, however, Montreal mayor Denis Coderre has signalled his opposition to the protest, mumbling something about there not being any by-laws that permit it and saying he’s worried it will attract the wrong kind of people.

“I don’t doubt FRAPRU’s good faith,” he told Le Devoir. “I welcome their work for social housing, but I can’t accept the notion of an occupation. It’s going to grow and it can get out of control.”

Like the problem of a lack of affordable housing has grown while the government has lost control?

Coderre likes to portray himself as a champion of the downtrodden, jumping to action pretty quickly last summer when the Archambault store across from the Berri-UQAM metro station installed anti-itinerant spikes to prevent loitering. He also championed a recent city project to survey the homeless in the city (informally estimated to number about 6,000) and create a city position of a Homeless Advocate. Critics say some of the mayor’s plans are a step forward, but they focus more on emergency responses as opposed to long-term solutions that, naturally enough, must begin with “housing first.”

The FRAPRU Camp pour le droit au logement is intended to point a big, bright arrow at that solution, offering a daily reminder of the precarious situation of many Montrealers when it comes to one of life’s most basic needs: shelter. The group vows to keep it going indefinitely to pressure Ottawa to restore subsidies for 125,000 current social housing units and to reverse Quebec’s cuts to housing subsidies for low-income Quebecers.

The camp will of course stir memories of the Occupy movement, which saw its local manifestation in Square Victoria in October, 2011. Montreal police were eventually called in to take the camp apart, but some fear that this time around, especially given the mayor’s public opposition, police reaction could come much more quickly and with much more violence than in 2011.

Ironically, FRAPRU has been quick to point out that the city is not a target of the protest. “It’s the current policies of the federal and Quebec governments that the Camp wants to fight,” spokesman François Saillant says in a communiqué, “because they threaten the very future of social housing.”

Coderre has himself noted that many Montrealers prefer to look away when they see the homeless. He should recognize that the FRAPRU camp is intended to get Montrealers to look beyond the most visible manifestation of housing poverty, to see not only the 6,000 sans-abris but the 72,000 households that spend 80 per cent of their income on rent and the 144,000 city homes where half their money goes to the landlord.

The camp may not be pretty; it may even turn out to be a bit of a nuisance, a black eye for the city’s tourism industry, an embarrassment for politicians in Quebec City and Ottawa.

But those irritants pale into insignificance when compared with the daily struggles of 100,000 Montreal families to pay for lodging. Never mind putting food on the table, they battle to simply keep a roof over the table.

Mayor Coderre needs to keep that in mind as he sits down with police brass to discuss how to handle the FRAPRU camp. He needs to tell the Service de police de la ville de Montréal that this is an occasion to engage in community policing, not an another opportunity to try out their pepper-spray, tear-gas and militarized crowd-control techniques.

Instead of opposing the camp, he should be sitting down with organizers and city workers to ensure the site is clean, safe and protected, and he should be expressing solidarity with protesters whose only goal, after all, is to fight on behalf of his most vulnerable constituents.

UPDATE: In the end, thanks to Coderre’s specific instructions to police, the camp was dismantled less than an hour after it was erected in a small park beside Place des Arts (the Parterre du Quartier des spectacles). Particularly galling was the way police convinced the protest campers to vote to leave: they threatened to destroy their property. They said whatever wasn’t packed up within 15 minutes would be trashed, from tents to sleeping bags to clothing.

Yes, officers who wear stickers on their uniforms and patrol cars saying “On n’a rien volé (nous),” were threatening, basically, to steal and then trash the private property of people protesting on behalf of Montreal’s poorest citizens. After a group discussion during which many campers said they couldn’t afford to lose the few possessions they had brought with them, most voted to pack up and leave.

Once more, the threat of violence and destruction during a peaceful protest did not come from protesters, it came from police, this time under the specific direction of the mayor. The lesson here is that public spaces in Montreal can only be “occupied” by private corporations. Various festivals will take over that very same park in the coming months and Coderre will celebrate the noise, traffic and trash they bring.

But letting a few dozen people camp there? God forbid the tourists should ever find out that not everyone here can afford expensive beer and souvenir t-shirts.