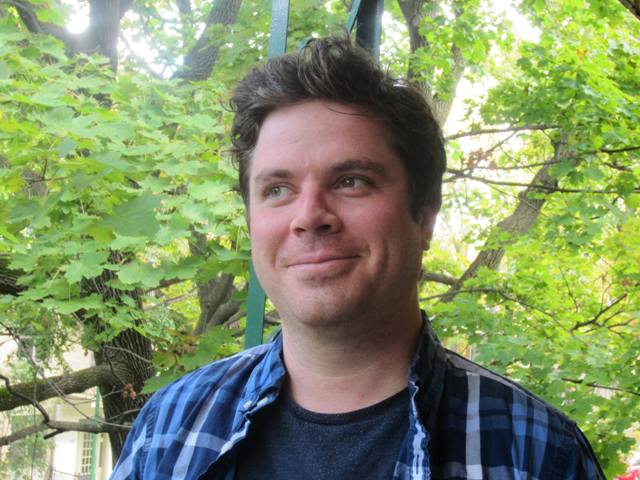 Mike Steeves’ debut novel Giving Up takes place over the course of one night in a non-descript city, where two seemingly insignificant events intensify a couple’s inner dialogues — their constant mental dissection of their entire lives both together and apart — to a breaking point. From cover to cover, the reader is dropped into the thick of the characters’ struggles: While husband James wrestles with his “life’s work” in the basement night after night, his wife Mary is concerned with her ability to bear children and to have a family with James. At times humorous and at others sardonic, Giving Up lays bare the all-too-recognizable struggles of a modern couple caught in a self-conscious cycle of what’s been, what is and what could be.

I met up with Steeves to talk about the composition of and inspirations behind his psychological novel, and how his personal experiences as a debut author figure into his work.

JP Karwacki: Are James and Mary based on anyone in particular that you know?
Mike Steeves: I modelled the book on my experience, but I also was very much conscious that it wasn’t about getting my experience down on the page. I took that experience in order to dramatize a condition that I don’t think is exclusive to myself, but that is something that a lot of people can identify with. This is the sort of strange alchemy that takes place with fiction. You have a story that’s very particular to an individual or a set of individuals, and yet somehow in the reading experience, it broadens out.

JP: When talking about how the book is and isn’t true to your experience, does that factor into how you’re unspecific about what James’ life’s work is for example, or what city James and Mary are living in?
MS: I wanted to have a story that didn’t localize the experience in either a specific discipline or métier, or a specific city. I didn’t want to hang those markers on the book so that people could naturally envision what they wanted. Throughout the writing I held back on giving those sorts of specifics.

I just finished reading a book by Peter Handke called Slow Homecoming, and in the introduction by Benjamin Kunkel, he points out something that’s strange in Handke’s work, which is that he does often withhold from naming people and places. There’s a part in Slow Homecoming where he’s in New York City but he’ll never say New York City, he’ll say “the greatest metropolis in the world.” He won’t say Central Park, he’ll say “a large open expanse in the centre of the city.” Kunkel speculates that naming means you know something. To hold back on naming is an act of humility, so to speak. By naming, you more or less are saying “I have the authority to say what this is.” When you know or have an idea of what the writer is talking about but nonetheless they never come down and say specifically (what something is), you’re held in limbo. You often want to keep the reader in a bit of limbo, it’s what keeps the story moving along.

JP: What sort of authors do you model your own style or form after? Did you encounter any artists that you feel your work is responding to?
MS: When I started working on Giving Up, I had been reading a lot of works in translation from Europe primarily, writers like Thomas Bernhard and Javier Marías and László Krasznahorkai. On the American side, there’s Lydia Davis and David Foster Wallace. I wanted to create a novel where the primary quality of it was voice, which is something that I think literature does very well and that no other medium has done better. Whereas film or TV has co-opted the multi-generational, different-places, different-times type of narrative, the singular voice is not something that any other medium has been able to do as well as literature.

JP: There’s one passage of the book where Mary’s thinking about how life might’ve been simpler back in the day as opposed to now. Is there something you think is keeping people from being satisfied with their everyday lives here and now?
MS: The way I set up the problem in the book is that James wants something very abstract, which is to complete his life’s work, and for that life’s work to be recognized as a success, which begs the question: What is success? You hear about very wealthy individuals who have achieved all this renown and recognition but don’t have time to spend with their kids, so you can’t really call it success because they haven’t hit all of the bullet points on the “success list.” So, the problem is: Is what James wants something that even exists? Is it something that can even be achieved?

If we take it that James is an artist and that life is short and art is long, in that sense you never accomplish your life’s work… you can have an idea going in of what you want to accomplish but can end up with something that is very different. So, the next work you do will contain stuff you had to leave out of the previous work, and so on, until you decide to give it up or die.

How does one decide for themselves when enough is enough, when should I throw in the towel? That’s a question that I wanted to explore in the book, but I don’t know the answer to that. What I do know is our lives are often spent in pursuit of these things. There’s that lovely quote from John Lennon, “life is what happens when you’re busy making other plans.” It’s a cliché, but I think it’s entirely accurate. We spend so much of our energy and waking lives in pursuit of these goals without sometimes realizing that that’s not what’s really happening. It’s a question that people are renewing on a daily basis. I wanted the book’s title to reflect the ambivalence I have around this, because while giving up is understood as a surrender, it also can be a sacrifice. ■

Mike Steeves launches Giving Up with a discussion of his work with Montreal-based author Jacob Wren at Librairie Drawn & Quarterly (211 Bernard) tonight, Friday, May 15, 7–9 p.m., free