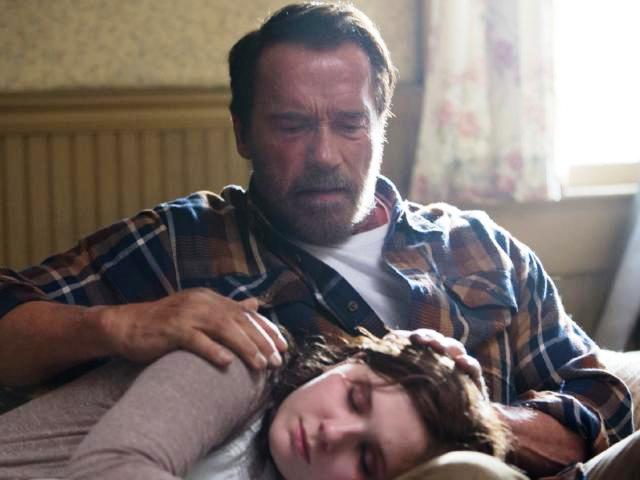 Schwarzenegger’s supposed comeback hasn’t exactly gone according to plan. Apart from the Expendables movies (which aren’t propelled by Arnold alone), none of the films he’s made since his days as the governor of California have been significant hits — his tango with Stallone, Escape Plan, did much better internationally.

Schwarzenegger is more self-aware than ever. Gone are the days where his inflated ego forced him into films where he always played the flawless action ubermensch with little to no room for flaws or nuance. His characters these days are old, tired and more than a little weary, but even that can’t really prepare you for his role in Maggie, a dour horror drama that’s unlike anything we could have expected from Arnold — both good and bad.

Wade (Schwarzenegger) is a rural Midwest farmer whom we meet as his daughter Maggie (Abigail Breslin) is being released from the hospital. Maggie, having run away from home sometime prior, now finds herself hospitalized with a zombie bite from the ongoing zombie epidemic that’s paralyzing America. Wade pulls some strings and manages to get Maggie home instead of put in quarantine, where she would get progressively zombified and eventually be killed. Both Wade and Maggie know that time is running out, but Wade refuses to accept the inevitable and attempts to continue to live life normally as Maggie slowly moves away from being the little girl he once loved and closer to being a flesh-hungry monster.

One of the best and most surprising scenes in Shaun of the Dead (spoiler alert for a 10-year-old movie that you’ve almost certainly seen) is the one where Simon Pegg’s Shaun is forced to kill his own mother after she is bit by a zombie and begins turning. It’s a touching and difficult moment in a film that’s otherwise quite silly; that same feeling of melancholia constitutes pretty much 100% of Maggie’s dramatic arc. The film’s inevitable outcome is established within the first 10 minutes; after that, it’s just Arnold standing in a field of sepia-toned wheat looking melancholy as Maggie goes through a series of progressive freakouts as the inevitability of her future looms.

It’s an interesting concept for a horror film, but it grows obvious by Maggie’s midpoint that the story would be much better served as a short subject. Director Henry Hobson draws on headier influences than you’d expect (there’s more than a little of Jeff Nichols’ Take Shelter in its approach to encroaching doom and gloom) but the film’s dramatic tension is pretty slack and soon grows fairly repetitive. This isn’t helped by the fact that the characters are severely underwritten and that (perhaps in the interest of functionality) Schwarzenegger’s dialogue has been kept to a minimum. It’s a relatively low-key performance from Schwarzenegger and, while it’s hardly a transcendent repurposing of the man’s talents, it shows that there might be something to Schwarzenegger moving into squinty Eastwood-esque roles in the future.

There are lots of nice moody trailer shots dispersed throughout Maggie but they never cohere into anything befitting of a feature film. Hobson hits a nice mood about 20 minutes in but feels content with just going back to that well every five minutes for the remainder of the film. Its combination logline/star makes Maggie a curiosity, but it would almost be more interesting as a trainwreck than as the shallow, repetitive mood piece it ended up being. ■