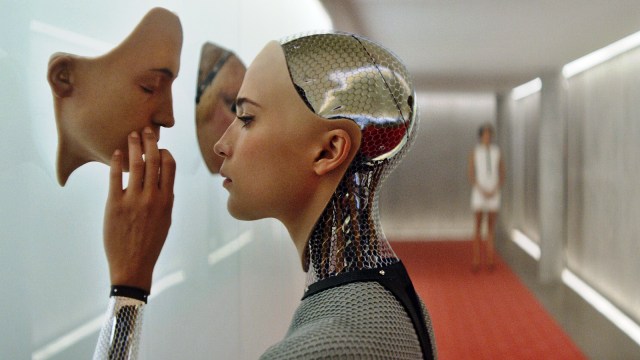 Alex Garland has a third act problem. A highly-acclaimed screenwriter (and one of the only household-ish names in the game) best known for his work with Danny Boyle, Garland’s films are usually high-minded genre pieces that take sharp turns in their final act. Even his best films (Sunshine, 28 Days Later… Dredd maybe be the outlier in this situation) are usually hampered by these sharp tonal twists — tonal twists that often turn public opinion of his films from canny genre exercises to divisive cult films.

Ex Machina is Garland’s directorial debut, a consciously pared-down sci-fi thriller that draws more on Twilight Zone traditions than the kind of shape-shifting genre films that have become Garland’s bread and butter. Ex Machina’s simplicity is its greatest asset, allowing Garland’s best qualities to shine without the need for a third-act dip into action movie histrionics.

Caleb (Domhnall Gleeson) is a young programmer at Bluebook, a media conglomerate not unlike Google if Google had never existed. Caleb wins a contest for a one-week getaway at Bluebook’s reclusive creator’s estate. Upon his arrival, he discovers that Nathan (Oscar Isaac) is a charismatic, intense and slightly unhinged alcoholic who has developed the world’s most advanced AI in the form of comely robot Ava (Alicia Vikander). Nathan has hired Caleb for a very important task: he’s to perform the Turing test to determine whether Ava has truly crossed the line between human and machine. Things, of course, prove to be more complicated than they seem. 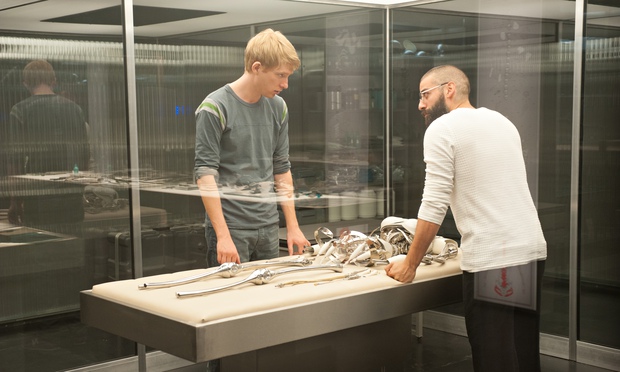 Ex Machina could practically be a stage play — it’s confined to four characters (the fourth being Nathan’s Japanese assistant, played by Sonoya Mizuno) and a handful of locations within Nathan’s bunker. Ex Machina is therefore more concerned with characters and ideas than ways into which one kind of film can somehow turn into an entirely different kind of film. Garland proves to have almost effortless talent at building tension and developing characters — it’s gripping from the start in spite of its relative familiarity. Garland’s film doesn’t have that much new to say about the threat of artificial intelligence (a particularly fertile ground in film these days, though nothing really taps into the reality of our world that much — robots are still infinitely more visually compelling than smartphones), but it does so in a way that feels fresh and interesting thanks to the pared-down approach favoured by Garland and his subtle skewering of the gender politics of the piece. (It’s not so subtle that the film doesn’t ogle naked robots for a little longer than necessary, granted.)

Ex Machina is a little visually off-kilter (its hazy, sun-dappled cinematography makes parts of this otherwise nervy thriller look like a commercial for a fibre-heavy yogurt that helps stimulate bowel movements in seniors — I don’t think that’s what they were going for), but Ex Machina stands out favourably in a film landscape that’s increasingly being overcome by complex world-building and franchising. Garland wears his Twilight Zone/EC Comics influences on his sleeve, but it doesn’t prevent this film from being a highly satisfying bit of business. ■

Ex Machina opens in theatres on Friday, May 8. Watch the trailer here: