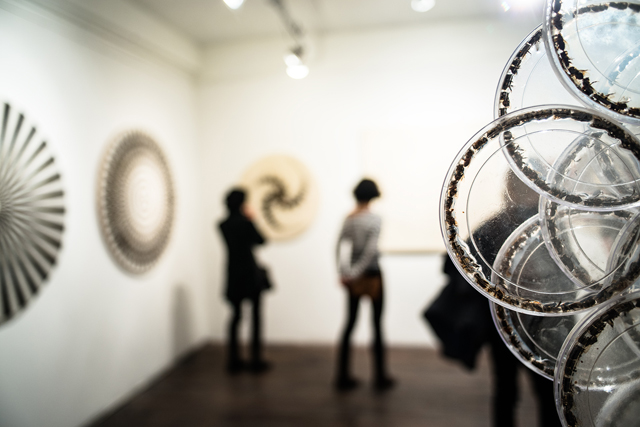 Destructive agricultural practices in Canada and their effect on the bee population is the focus of a new exhibit on display now at the Belgo Building’s Visual Voice Art Gallery. Sarah Hatton’s Bee Works offers an awakening insight into the regular use of neonic (nicotine-based) pesticides, arranging thousands of bees that were killed by neonics in large-scale geometric patterns.

Hatton’s work is amplified by being in a confined room, allowing the viewer to feel immersed in the presence of these works. As soon as one moves beyond one piece, another is immediately within view, all attacking the senses through illusory motion that locks the eyes and aptly disorients the visual plane.

These works elevate the concept of systematic destruction, and Hatton’s elucidation of Canada’s terrible agricultural practices is not merely read or heard—rather, in the exhibition room, Hatton’s work is felt.

Neonics are nicotine-based pesticides that are absorbed by plants, and subsequently absorbed by bees. After absorption, honey-bees become disoriented and cannot find their way back to the hive. If dead honey-bees are not of concern then the inevitable threat to our food supply will definitely provoke national interest — without proper pollination, a staggering amount of produce will not develop.

Hatton illustrates the effect of neonics on bee populations by carefully constructing visual sequences which are experienced by the viewer in a similar fashion. This reaction completes a causal sequence, for it articulates the combined efforts of oil, chemical and pharmaceutical companies to control natural phenomena through artificial means, and the resultant large-scale destruction of honey-bees. The use of geometric patterns reveals the systematic approach taken by these companies and the disorienting after-effect. Hatton’s process of grouping the bees together with resin reveals their natural herd instinct while mimicking the interruption of their natural patterns by outside control techniques. It is in this way that Hatton has framed both the biological order of bee populations and the artificial constructions which are destroying them. 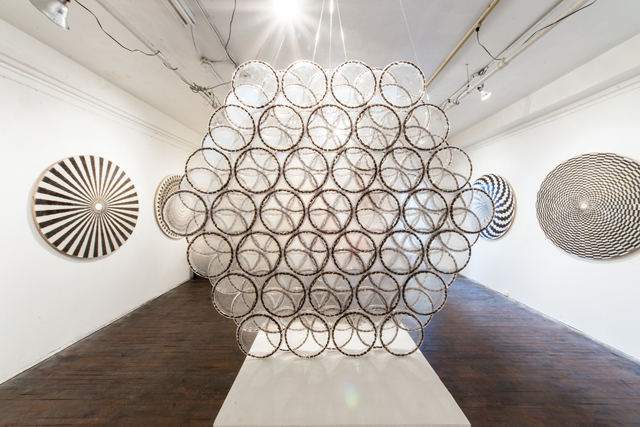 Hatton’s art has gained progressive reactions from local farmers and activist groups. As Hatton states, “Most touching has been the direct involvement of other beekeepers, who wholeheartedly support the message of my work, even to the point that some Canadian beekeepers have sent me their own dead bees so that I can continue to make more art and spread the message. Beekeepers who have lost hives know that feeling of utter frustration over a collapsed hive—seeing a communal system that is perfectly honed and effortlessly choreographed break down into disorder, disharmony and isolation—the very antithesis of the beehive. I believe that this is why this art has such a bittersweet resonance with beekeepers.”

Bee Works has also earned the attention of the David Suzuki Foundation, which is actively engaging various governments to boycott seeds treated with neonics.

The concept behind Hatton’s work is extremely effective due to its simplicity. It delivers a delicate balance of art that is both aesthetically beautiful and an effective symbol of protest. A powerful message has arisen from these works that has encouraged the public to also take action: “I have received letters from all over the world from people telling me that my art has made them aware of the seriousness of the bee crisis,” Hatton notes, “Or sharing that they are making changes in their own lives to support bee populations or to boycott companies that use neonic pesticides.” ■