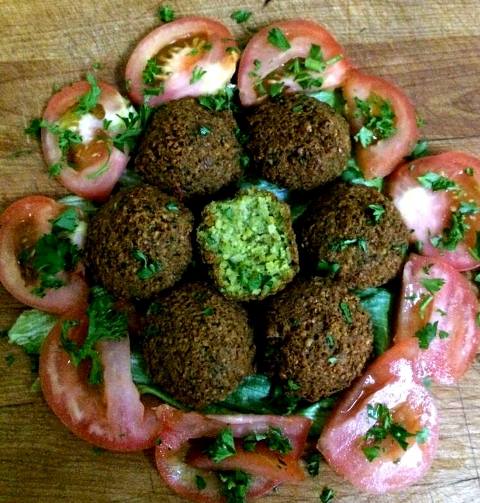 Where the barren stretch of commercial wasteland east of Atwater along Ste-Catherine begins tapering slowly toward less fiscally threatening turf, there springs forth something so fresh and so green, one can hardly fathom its survival on these economically tough streets.

It’s a falafel. And the secret to its success is all in the ball.

Middle Eastern mainstay Nilufar (lotus flower, from Persian) has been feeding people in the Dawson/Concordia student ghetto, from the downtrodden to the affluent, on the super-mega, downright-silly cheap for 21 years.

In 1995, a falafel pita cost 99 cents. Two and a fountain drink ran two bucks, plus tax, extra 50 cents for a canned soda. Twenty years and hundreds of visits later, the same sandwich goes for $1.29. Today, a trio of sandwich, soup and that ever-flowing fountain fruit drink feeds for a surreal $2.50.

Nilufar’s legacy of delicious, nutritious affordability began on Halloween 1994, when an area green grocer and his wife celebrated the opening of their new restaurant by giving away free food.

The couple’s daughter — also Nilufar, though her mother Nasrin insists that’s only because she loves the name — remembers the anxiety of potentially missing trick-or-treating that night. And then her tears when the witching hour came and went without candy.

She’s been running the resto full-time in recent years. Nasrin (who remembered me, without fault, as “Mr. No Tomatoes” for nearly two decades) retired her spot behind the counter, while dad Bashar is still in the grocery game with a store in Côte-des-Neiges from which Nilufar’s meat and produce are sourced fresh at least once, if not twice, daily.

Nilu admits that, throughout her teens, she wanted nothing to do with falafel. “I’d work in call centres or retail,” she recalls, “but I’d have to call in sick and go help my family if someone couldn’t make their shift at Nilufar.”

The quick-witted scion of this modest empire puts her own mark, loudly, on Nilufar’s day-to-day affairs. Her social media presence is boisterous, convincing, and often hilarious. Nilu once embarked on a Facebook manhunt, shaming the poor, anonymous soul that dared steal a salt shaker from what amounts to a community kitchen.

The space is now painted green with brown trim, an ode to the staple dish that draws 300+ visitors daily. A second-storey dining area has long since closed, but little else has deviated from the status-quo after 21 years. 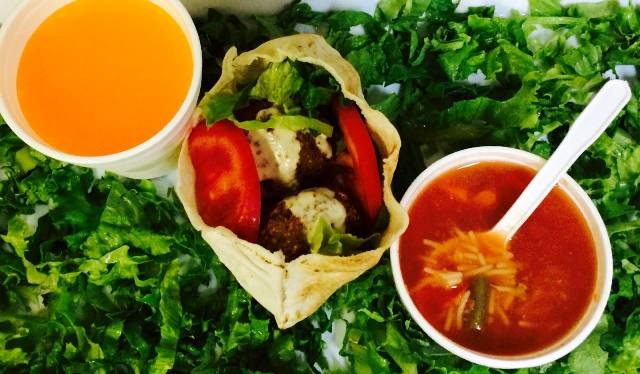 So I set out to Nilufar knowing exactly what to expect, though with room to explore. Falafel with the odd side has been my steady go-to for 20 years. It’s just that good. But I’d never ordered meat, and today that would change.

Accompanied by two famished friends, we adopted a mandate to order whatever we wanted, without counting, eat it all, and then see if we’d break 30 bucks.

Our server didn’t flinch as we called out menu items and switched around toppings. He confirmed it all back to us without error: two shish taouk pitas, all dressed; three falafel pitas, extra ball each, no tomatoes; a kafta sandwich; a side of three falafel balls, plain; two small soups, Tunisian and Moroccan; a family-sized spicy fry; two sodas and a cup of Nilufar’s fountain orange drink.

We waited all of nine minutes before the order was ready. Like many, I’ve only ever peered at the kitchen through the small service window, but aside from a huge, busy chop ‘n ‘prep counter in the centre, Nilufar is equipped solely with a grill and the fryers. Everything is calculated in small batches and prepared by order.

Which gets us to the ball. The lean, green orb of protein has not once had its formula fucked with, starting from scratch with a paste of chick peas, veggies and spices prepared daily with as much labour as love. Your average downtown fallacy is a mealy, oily, sickly-toned blob that’s been sweating under a heat lamp all day. They ain’t even hangin’ with Nilufar, with few exceptions.

Nilufar falafel wears its brown skin like a deep-fried armour of crisp, giving way to a moist, plush interior that steams as it gleams emerald. A standard pita pops two in the chamber, but I’ve learned to fill mine out a lil’ because I’m a fancier shade of broke, nowadays. Fresh lettuce and a just-right dose of tahini-heavy house sauce complete to compete to win for the crunchiest payoff against the softest bread, to the last bite.

We admired the individual specimens on our small entree plate, balls on the brink of hitting supermarkets, branded “Royale,” because it rhymes with “loyal,” Nilu swears proudly.

The turmeric-based broth goodness of the Tunisian soup, with couscous, chick peas and carrots, pleased best. Our oversized fry plate, frozen spuds fried right and twisted with a little kick-ass, stayed gold to the last, scrappy morsel of our half-hour feast. Clean cooking oil goes a long way — Nilufar leaves you heavy, not greasy, with satisfaction.

Now to the meats. I knew from the jump that the chicken wasn’t of the skewered Montreal variety we know and fight about. Let’s spare the debate in favour of these freshly charred, delicately seasoned breast morsels. The kafta sandwich, meanwhile, was declared a hit, seasoned to the taste of someone who knew what he was hoping for.

So that was six sandwiches with extras, two soups, two sides and three drinks. That’ll be $26.60, please. As we pay and exit, our belts brimming, a couple enter with three young children in tow. On the sidewalk, we speculate it will still cost them less than our indulgent adventure. Nilufar is for the people. And her people are happy. ■