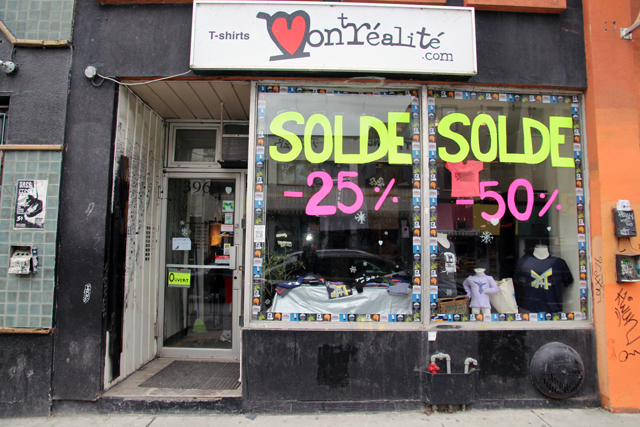 Some things never change—many of the most iconic symbols of Montreal, such as the angelic monument watching over the mountain, the Farine Five Roses sign, the Orange Julep and even the Turcot Interchange have been around for decades, giving generation after generation of Montreal-dwellers a feeling of familiarity as warm as a sesame bagel straight from a wood-fired oven.

For the past 13 years, one family has made it their business to get people to wear their love for these Montreal icons and the city they represent on their sleeve. Husband-and-wife team David Jenkins and Nicki Horsley are the owners of Montréalité, a t-shirt shop on the Main that’s been selling fair-trade t-shirts with silkscreened graphics depicting many of Montreal’s most recognizable features since the early 2000s. Now, after over a decade in business — during which time the nearly century-old angel on the mountain has witnessed dozens of changes of the sort that have left St-Laurent Boulevard a strip where small businesses struggle to stay afloat — the couple is closing up shop and hanging up their t-shirts for the last time.

I caught up with the pair at their shop earlier this week to ask them about the shirts and their decision to close.

“At a certain point you have to say okay, that’s enough. Too many bad winters, and the street is not working well,” Jenkins explains, pointing to low foot traffic on the sidewalks due to difficult parking rules, overzealous ticketing and gaps in public transit. When combined with high rents and business taxes and a sluggish economy that makes some would-be customers hesitate at the price of a sweatshop-free hand-printed shirt, it’s a mixture that makes it too impractical to continue for the couple and their young family. 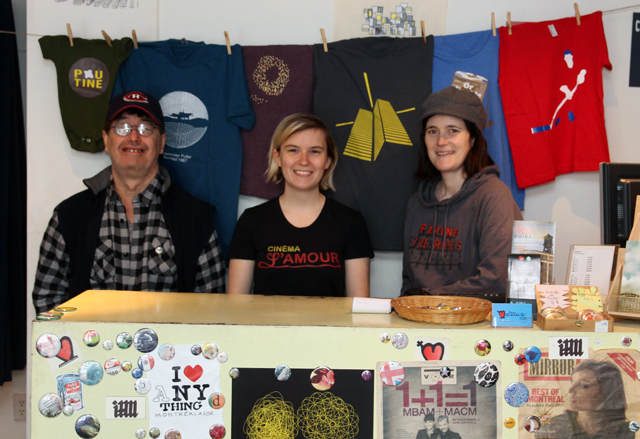 Despite these realities, both Jenkins and Horsley retain a soft spot for Montreal’s main boulevard.

“I did like being on this street, even though I knew it was struggling,” Horsley says. “I liked being part of it for a bit. I love doing the street fairs, even though they’re really hard work, they’re always fun and you see loads of people you know.”

Jenkins and Horsley are preparing for their final weekend by hosting a goodbye party in the shop on Saturday, April 25. The shop will be open throughout the day, and everyone is invited to come enjoy a festive atmosphere and take advantage of liquidation prices on the t-shirts, with their eye-catching graphics that have been developed over the years by Montreal illustrators and designers including Todd Stewart, Jonathan Himsworth and Andrea White.

“The idea was to represent the signs and symbols of the culture,” Jenkins tells me. “Not to instill pride so much, but the idea that you’re part of the place you’re in — and for the tourists, to bring them into it. Then they get to enjoy what we enjoy about our city. I’m very interested in signs and symbols, and I love the culture I live in. Back then there was nothing like this in Montreal. There is now. There are many more people doing t-shirts about Montreal now, which is good. We’re stopping though. It doesn’t make economic sense to continue.

“It’s been fun doing it. We’ve had some great moments over the years, with huge amounts of laughter and lots of hard work.” ■

The public is invited to join Jenkins, Horsley and the Montréalité family for a goodbye party and liquidation sale in the shop at 3960 St-Laurent on Saturday, April 25, 11 a.m.–8 p.m.