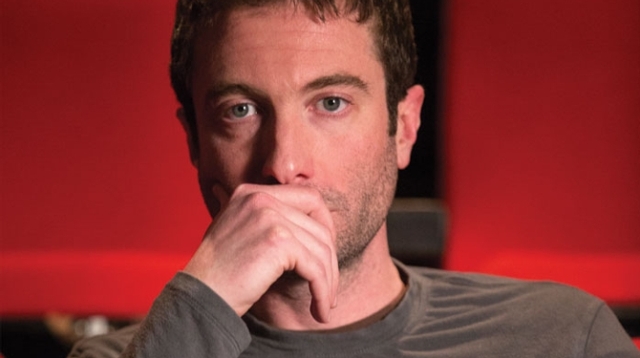 Jacob Tierney has been acting since he was seven, even before his father Kevin Tierney’s career as a producer began. The 35-year-old has 43 film and TV credits to his name, and he’s directed four feature films since 2009 (among them The Trotsky and the upcoming Preggoland), along with a fistful of Canadian TV shows.

Tierney’s theatre experience is limited to acting, and it’s been years since he’s stepped on stage, but when the Segal Centre offered him a chance to direct Travesties — an award-winning play by the author of Shakespeare in Love and Rosencrantz and Guildenstern Are Dead — he got giddy.

“The truth is, I was like, ‘You had me at Stoppard,'” Tierney says. “There was not a [Tom] Stoppard play they could have offered me that I wouldn’t have said yes to. I mean part of the appeal of directing theatre, to me, is the chance to deal with text in a furious way and, like, it doesn’t get more up my alley than this. Stoppard’s interests and mine dovetail all over the place, and he’s just such a good writer. Once I read Travesties, I could see why they offered it to me. You know, the Lenin of it all, and the Joyce.”

The Segal’s production of Travesties is staying true to the play’s integral WWI setting (Lenin and Joyce are characters, after all), but above the period costumes and music and imagery, Tierney chose to accentuate the play within the play.

“The character of Henry Carr is remembering his past,” he explains, “but he’s remembering it all filtered through a production of The Importance of a Being Earnest that he did. And he’s half-remembering the play. The great thing about Tom Stoppard is that he’s done all the work for us, all we have to do is hit the tone. He wants us to play this as an Oscar Wilde play where the stage direction’s all over the place — it’s not something I invented out of thin air. But it’s definitely something you can choose to accentuate or withdraw from. And we’re going towards the, you know, soufflé of it all, if you will. The joy of wordplay and of wit.”

During rehearsals, Travesties came to life via an eight-piece ensemble cast that was game for the challenge, according to their director. “They’re just terrific,” Tierney says. “They were all cast because they got the tone that we wanted. They came in playing it like a farce already, like an Edwardian farce — that’s where it sings to me. And, you know, we’ve assembled a gang of people who get that.”

Another credit coming Tierney’s way is as a writer on Xavier Dolan’s forthcoming film The Death and Life of John F. Donovan (2016), the director’s first English-language Hollywood film (starring Jessica Chastain and Kit Harington). Tierney and Dolan have worked together before in an actor/ director exchange: Dolan played a small role in Tierney’s Good Neighbours, and Tierney did the same in Dolan’s Laurence Anyways.

“Xavier, truthfully, is somebody who consistently inspires me, so working with him in that capacity was super fun,” says Tierney. “Super fun.” He describes the role he played as anglo consultant (for natural-sounding dialogue) and sounding board, which is especially relevant given the connection between the plot and Tierney and Dolan’s common experience at the start of their careers. “It’s a movie about two actors, one of whom is a kid and one of whom started young. And both of us did the same thing — we were both kid actors. So there are a lot of different reasons why he asked me to do this.”

After enthusiastically listing off a series of other upcoming projects — including a new YTV series called Game On with Samantha Bee (The Daily Show) and Jonathan Torrens (Trailer Park Boys) and a Comedy Central/Crave sitcom called Letterkenny with Jared Keeso (19-2) — Tierney asked, “Do I sound tired? Cause I’m exhausted!” Somehow it didn’t show. ■