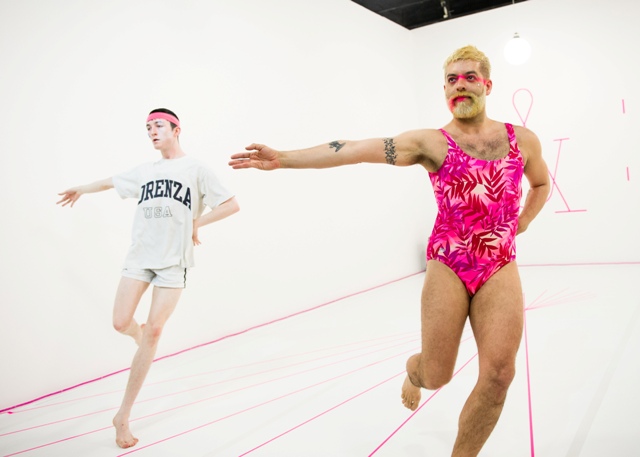 Just after the May long weekend, Montreal will be home to two weeks of innovative theatre, dance and other performative arts during the ninth annual edition of Festival TransAmériques (FTA), running from May 21 to June 4. During the festival, artists from locales as far-flung as Berlin, Tel Aviv, Lisbon and Seoul will join more homegrown performers from Montreal, Ottawa and Toronto to present a wide variety of works that are at the cutting edge of their genres. Check out our round-up of festival highlights below:

FTA opens with a free party in the Agora Hydro-Québec at UQAM’s Coeur des Sciences, featuring a performance by Seoul’s Dancing Grandmothers and a soundtrack of new Korean dance tunes. This inter-generational dance performance is led by unconventional Korean choreographer Eun-Me Ahn in her first Canadian production. The opening party takes place at 175 President-Kennedy, May 21, 10:30 p.m., free. The Dancing Grandmothers will also perform at Théâtre Jean-Duceppe, Place des Arts (175 Ste-Catherine W.) on May 21–22, 8 p.m., $40–$60

In Archive, Israeli performance artist Arkadi Zaides reproduces the postures and gestures of people living in occupied lands, acting out everyday scenes of violence and fear as filmed by Palestinians for the Israeli Information Centre for Human Rights in the Occupied Territories. The source videos are projected behind Zaides during the performance. Cinquième Salle, Place des Arts (175 Ste-Catherine W.), May 24–26, 7 p.m., $33–$39

STO Union founder Nadia Ross returns to FTA with What Happened to the Seeker?, a three-part theatrical and installation work that follows a group of aging 1960’s hippies who went from youthful spiritual tourism of India to middle-aged free-trade consumerism. Théâtre Prospero (1371 Ontario E.), May 27–29, 7 p.m., $28–$34

A collaboration with Printemps Numérique is behind the multidisciplinary Phos by artist Stéphane Gladyszewski, a performance that blends dance, digital and visual arts as viewers in a black-box setting are taken on a trippy journey to the fringes of reality. Studio O Vertigo, Place des Arts (175 Ste-Catherine W.), May 28–31, various performance times, $23–$29

Belgian dance company les Ballets C de la B return to FTA with Tauberbach, a dance performance that highlights the resilience of people living through extreme circumstances as the protagonists, Estamira and Fragile try to survive and seek harmony across a stage strewn with clutter. Monument National (1182 St-Laurent), May 29–June 1, 8 p.m., $43–$60

Montreal dancer Manuel Roque takes the stage in a solo performance of Data, set to the dramatic Requiem by Fauré. In the piece, Roque traces the origins of life and humanity in the world back to his own body. Théâtre Prospero (1371 Ontario E.), May 31–June 2, 7 p.m., $28–$34

With the play Isolde, the New York City Players turns the romantic comedy on its head with their story of an actress facing memory loss in the midst of meeting an exciting new love interest–who isn’t her husband.  Maison Théâtre (245 Ontario E.), June 2–4, 8 p.m., $38–$45

Portuguese choreographer Marlene Monteiro Freitas presents her take on the myths of Orpheus and Pygmalion with Of Ivory and Flesh – Statues Also Suffer, which portrays the efforts of grotesquely masked dancers and musicians to break free from their bodily prisons, set to music from Monteverdi, Arcade Fire and Nina Simone. Cinquième Salle, Place des Arts (175 Ste-Catherine W.), June 3–4, 8 p.m., $33–$39

Along with performances, a number of film screenings will be offered throughout the festival, including highlights Eternal Sunshine of the Spotless Mind (2004), Five Broken Cameras (2011) and a series of dance shorts including 2014’s Une Courte Histoire de la Folie by Isabelle Hayeur. Cinémathèque Québécoise (335 de Maisonneuve E.), various dates and times.

And if all that still leaves you wanting more, the FTA will be hosting a series of parties, each with a different theme and program. A few to look out for will be Berlin at Montreal with DJ Tartuffe (Lars Eidinger) (Friday, May 22), an evening with the Chromatic Festival and the interactive Jedi Action Drawing (v3) (Friday, May 29), a night of retro French pop with DJ Sophie Cadieux (Saturday, May 30) and the closing party with OFFTA on Thursday, June 4. All parties held at the Agora Hydro-Québec at UQAM’s Coeur des Sciences (175 Président-Kennedy), beginning at 10:30 p.m.

Festival TransAmériques runs from May 21 to June 4. Check the FTA website for the full program.

Look for more FTA coverage on cultmontreal.com in May.