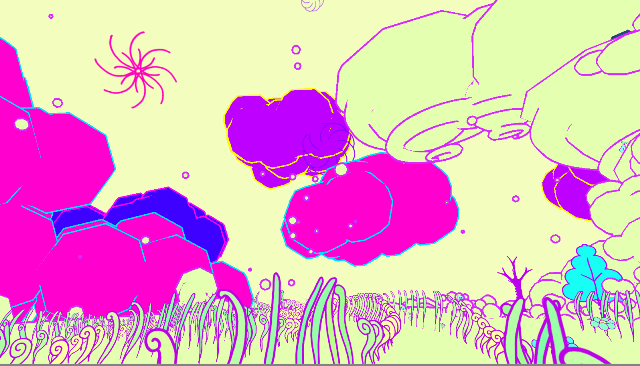 Sometimes you just have to stop and smell the digital roses.

“I like making things that are psychedelic,” says Paloma Dawkins, creator of Gardenarium. “Where you get to trip out for a while.”

Gardenarium started out with even loftier, earthbound ambitions – it was supposed to be a game installation inside an actual car – but now six months after the project began, it’s a stroll in a colourful field full of pulsating and wiggling plantlife. Oh, and the field happens to be set on a mountainous cloud.

The plants, ranging from bulbous cabbage patches to stringy stalactites (clouds have caves, dontcha know?) were hand drawn by Dawkins, an illustrator and animator, as were the human and anthropomorphic characters. They’re all two dimensional. The cloud formation, on the other hand, is in 3D.

“The cloud is spheres upon spheres,” she says, adding that the 2D elements were much easier to do. “I would always use the same sphere, and then squish it or stretch it, or use many of them at the same time.”

The end result is a happy go lucky, vibrant garden in the sky soundtracked by local experimental musician YlangYlang. It also looks something akin to the universe that the Yellow Submarine animated film was set in, albeit with a softer colour scheme. There is a goal to Gardenarium — to reach the peak of the cloud and eventually find the mysterious depot — but Dawkins doesn’t want players to be too invested in rushing to that great big soda can in the sky.

“I wanted it to have all the comforts of a game without the game. So you can pick up all these cans, but there’s no way to know how many you have. Once you reach the sage and you enter the other world where you have to stop the evil clouds, there’s no counter,” she explains.

Dawkins, an Ottawa native who has called Montreal home for the last few years, was a self-taught animator at the NFB when she decided to add game-making skills – specifically how to use Unity – to her artistic tool belt.

“A lot of illustrators, myself included, think of code, video games and all this numerical new media as something unattainable, just out of reach. It’s easier to stick to comics than take that scary first step,” she says.

Her advice for artists looking to make the same jump?

“Just do it,” Dawkins says. “It’s easier than you think and there are a lot of resources.” ■

Gardenarium is available on PC, Mac and Linux