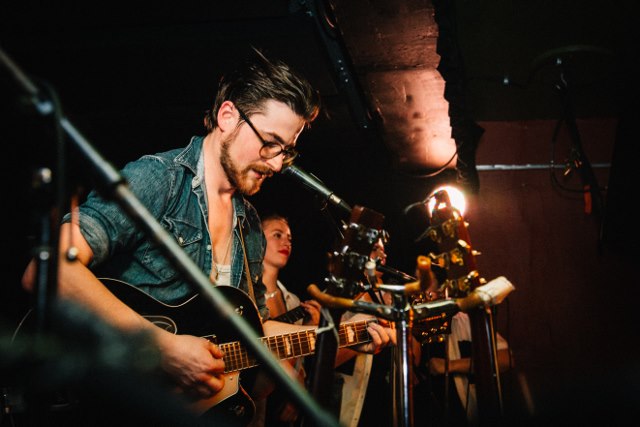 At only 23, Rice (real name Henry) has racked up impressive experience, not surprising given his pedigree. After a false start on drums and piano around the age of 10, Rice picked up the guitar and got to work at 15, playing his first show at Brutopia.

“It was a great show,” Rice recalls. “We did three sets of mostly original music. I think it was a weekday so people were sort of lenient with the 16-year-old-doing-his-first-songs kind of thing. It wasn’t very good but it was a lot of fun.”

“I was playing the bars a lot by the time I was 16,” he adds, “and I’ve been doing that ever since, practising and getting okay at it.  And I remember Dad told me, if you wanna play music, you have to write your own music.”

Rice released an EP and an LP at the ages of 17 and 20, but they were low-budget DIY exercises that didn’t satisfy their maker. “I was too young and not in the right headspace,”he says. “I wasn’t ready to take the plunge like I am now.”

Despite his father’s career, Rice’s music doesn’t resonate with echoes of the Emerald Isle. “I love listening to Irish music but it’s not part of what I do, except maybe for the lyrics because I love Irish songwriters. My music is mainly influenced by funk and rock and soul.”

Through his heritage (Irish on both sides), Rice felt enough of a connection to the old country to name his record after one its cities, where he still has family.

“I just got back from visiting Belfast with my girlfriend, and I met my cousins and my aunts and I saw where my mom grew up,” Rice says. “Because this is my first record, the first thing I’ve ever done for myself, I thought it would be appropriate to go back to where it all started. It’s my roots. It felt like a fitting title.”

Though Rice’s preference is for the American musical tradition, he sees a meeting point between his music and his father’s. “It’s what music does to a crowd. Irish music will get people up and dancing and that’s sort of the goal: to keep people happy and keep people drinking and having a good time.

“Being around music  from such a young age, music is what I’ve always wanted to do,” Rice adds. “I’d like to do this forever.” ■