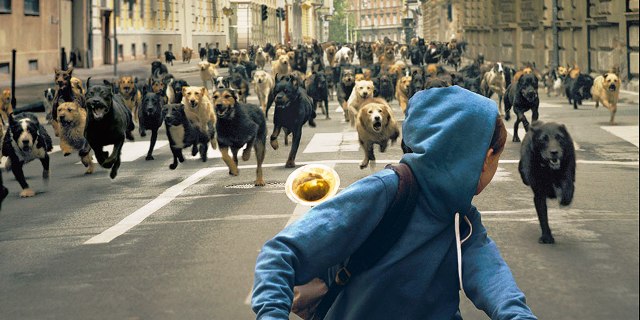 The protagonist of Kornel Mondruczo’s White God is a dog. This isn’t a dog with the tough-but-charismatic raspy tones of Bruce Willis, insane superpowers or really anything out of the ordinary. Hegen is a good companion to his owner Lili, but her father isn’t a big dog guy. He forces Lili to abandon Hegen after a neighbour calls the cops on him, leaving Hegen to fend for himself in Budapest. The resulting film (which won the Un Certain Regard prize at Cannes in 2014) falls somewhere between The Incredible Journey, The Birds and Only God Forgives (!) on the tonal spectrum. I spoke to director Kornel Mondruczo about the genesis of the idea, the subtleties in tone necessary to pull off a dark film about a dog and his experience using over 250 shelter dogs in the making of the film.

“Actually, this movie came to me because I went to a shelter house and I found a reality that I couldn’t believe. I thought to myself, ‘I’m part of this system, and really they’re just awaiting their own death and they can’t do anything about it.’ That was the starting point of this movie — it was really a personal touch,” he explains. ‘Then I started to write the script and I thought ‘Of course, I can’t pull a realistic movie out of it, because if I’m realistic, it’s so far from the truth.’ That’s why I tried to create a sort of a fairy tale by mixing the genres together and using the dogs as a metaphor for all kinds of minorities. That mixture became this movie.”

There are few human characters in the film — the brunt of its performances fall on the pair of dogs playing Hegen and the other dogs playing his cohorts. For Mondruczó, there was never any question of using CGI to draw out or even augment the dogs’ performances. “You can find, in this movie, much more alive emotions. (…) It’s almost immoral if you start to generate in a computer what animals can feel. It’s totally against the philosophy that I’m sharing, that all animals, plants and other living things on the planet have the same rights to be. I wanted to shoot their own emotions.”

I suggest to Mondruczó that it must be difficult to get a performance out of an animal that doesn’t necessarily understand that they’re acting; he disagrees. Dogs love to play, Mondruczó says, and acting is really just an extension of their love of play.‘ I think they’re really trying. I mean, they love humans way more than humans love themselves!” he laughs.

I point to a particularly rough scene in which Hegen is taken in by a greasy gangster who trains him for dogfighting ; in his first fight, Hegen kills his opponent. In what would certainly be Hegen’s Dog Oscar clip moment, he looks mournfully at the dog he has just killed. “That scene for me was really difficult, but not because it was tough; it was almost the opposite. The trainers worked on that scene for about a month, and the Rottweiller and Hegen became best friends! I shot the scene for five days and they were playing the whole time — they were like children in the way they were happy to meet each other again. I think in the end it was okay. I have lots of happiness from that scene!” he laughs. “Afterwards I used a lot of close-ups and sounds to make it believable.”

Mondruczó and his crew employed more than 250 rescue dogs to act in the film, an ambitious decision that brought out the doomsayers. “At the beginning, everyone thought it was impossible to do it without CGI or without, I don’t know, $20-million or something. Very few producers trusted us. (…) I heard so many things about this movie: it’s too difficult, too simple, too brave, not brave, blah blah blah. I think it’s something you must discuss. That’s the most you can do with art.”

During the filming of the movie, Mondruczó and his team put together a website where they offered up the film’s canine cast for adoption. By the time they were done filming, nearly all of the dogs had found homes. “Of course we all know it’s just a drop in the ocean. (…) I really became an animal rights fighter. On one hand, because of the animals, but on the other, because I would like to live in a society where animals have rights.” ■