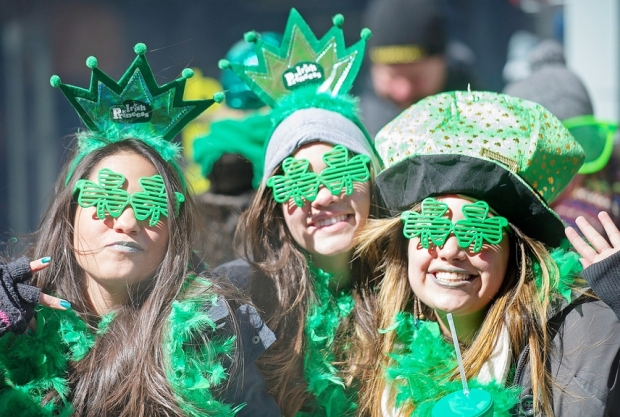 Whether or not you appreciate the sea of green and mess of drunken shenanigans that tend to accompany the annual observance of all (good) things Irish, St. Patrick’s Day in Montreal is a big fucking deal. We have the oldest St. Paddy’s parade in North America (192 years young, it’s departing from the corner of Fort and proceeding east on Ste-Catherine at noon on Sunday, March 22) and our Irish community — though largely assimilated, mixed and bearing few ties to the old country — makes up a large part of the anglo communities (and part of the franco communities) across the province.

Part Irish or no, St. Patrick’s Day — like patronage at the Irish bars that exist across the western world and beyond — transcends blood ties. So if you’re looking for somewhere to tie one on, or maybe just devour a decadent breakfast in a festive setting at ungodly hours of the morning, here’s where the revellery’s at, on St. Patrick’s Day itself, Parade Day and relevant moments in between:

Now we don’t mean any disrespect by starting with a British pub (a satellite of Burgundy Lion), in Mile End of all places, but we’re being slaves to the alphabet here.

March 22: B& B opens for brunch at 10 a.m. and rolls out a three-party Irish-whiskey tasting post-parade (2 p.m.) as well as a special cocktail called Irish Toast.

Though not an Irish bar per se, Brutopia is in the eye of the Irish-bar storm, often catering to those with an ear for Celtic music, and remains a favourite with the Concordia crowd.

March 22: Party post-parade (or even during) as Bru is open from noon till the wee hours, with Haidrian’s Wall playing live as of 4 p.m.

This Little Burgundy resto-bar is Montreal’s flagship British pub (in the 21st century, at least), and wears its anglophilia on its sleeve. It tends to save most of its holiday programming for the ultra-English St. George’s Day, but given its old-country brew, whiskey, trad pub grub and regular soccer broadcasts, the lines between the cultures are very fine in the minds of most Montrealers. Long story short, it’s jammed for St. Paddy’s.

March 22: BL opens at 9 a.m. on Parade Day, serving brunch and plenty of drank to follow.

Hurley’s has been holding the Irish pub & grub thing down with impressive class for decades.

March 17: On St. Paddy’s itself, Solstice plays downstairs and Squidjigger keeps it lively on the top floor from 4 p.m. till closing.

March 17: The Kenny Dupree Band takes the stage at 7 p.m.

This chain of Irish bars keeps it going full steam at two locations on the island.

March 22: The Main location opens at the crack-of (by weekend standards, anyway), serving breakfast from 8-11 a.m., and Salty Dog plays live from 3-10 p.m.

March 17: Local Celtic band Goldfish entertains and the party rolls from 2 p.m. to 2 am

March 22: Breakfast and Jameson-spiked coffee ($12.75) are served from 10 a.m. on Parade Day, with music by Pat Gryder and Nelson Carter from 1 p.m. till closing.

With three locations straddling NDG, downtown and the Plateau, Ye Olde would be the victor if Irish bars were doing the whole territorial conquest thing.

March 17 and March 22: Swerve is the band that NDG patrons will be drinking to as of 3 p.m. on St. Paddy’s Day and Parade Day.

March 22: Pre-parade, get your drink on as Stewart Burrows performs from 10 a.m.

March 22: Get jigging to a live set by Good Time Charlie, playing to the post-parade crowd as of 3 p.m.

Off the anglo Irish-bar grid, UQAM-ghetto pub Yer Mad is an alternative to the downtown shuffle.

March 17: Expect specials on select Irish drank (including Guinness) and a fair share of knees-up revellery.