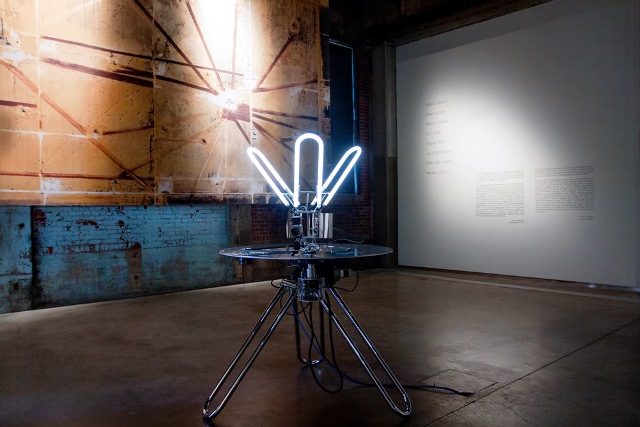 From Pascal Dufaux’s The Cosmos in Which We Are

Montreal’s Art Souterrain festival, now in its sixth year, launched on Nuit Blanche (Feb. 28) and is showcasing the works of 65 artists both local and international until March 15. Art Souterrain uses Montreal’s underground city as a gallery, mounting works in unconventional locations and allowing viewers to probe the subterranean network. Using these public locations ensures that anyone can access the exhibits; art connoisseurs and passersby alike.

Perhaps fittingly, the festival’s theme this year is public surveillance. One of many questions being addressed through these works is how surveillance technology conflicts with our individual privacy and freedom. Once we know we are being filmed can we still act normally? Are we conforming at a level too casual to notice or too profound to feel comfortable? Inevitably questions arise as to who is watching us from the other side and why.

Pascal Dufaux’s The Cosmos in Which We Are, installed at le Palais des Congrès, captures the act of surveillance—albeit not in its typical one-sided approach. Dufaux has successfully hijacked the prototypical surveillance system. A camera rotates, indiscriminately observing us and itself. The image captured by the camera is projected onto the walls around it, allowing us to peer into its neutral perspective. This process illustrates a perfect cycle, and the images are projected as works of art from an unexpected source.

Rarely do we see the images captured by surveillance systems, and our examination of them is one of Dufaux’s many aims. The installation acts as a unifier, a mechanical representation of our powers of observation while forcing the surveillance system to act as an art object.

Dufaux likens the activity of his kinetic sculpture to a flow, a cyclical process that exposes our individual response to experience which is at a distanced standpoint. Our observation of reality is of something that lies outside of us, an exterior world that we have carved with words and thoughts and interpreted as otherness—a topic which many philosophers have addressed as a dividing element in our being. Our reality is the sidewalk, the starry cosmos and all sensory manifestations of life. We tend to observe this reality as a transitory agent which we are not a part of.

Video, social media and other seemingly artificial realities can add to this distance between us and what we consider the real. However, Dufaux asserts that, “The sense of distance is a construction of the mind.” We create the paradox that we believe confronts us from the outside. Our disconnectedness is from a reality that we are already submerged in, and our apprehension can be considered a completion of a cycle—or as Dufaux muses, “The circle is where we are,” for “We are the centre of our perceptions.”

Our distance from our observations is self-imposed. Dufaux argues that “We need to develop an ethic in our thinking,” fulfilling our part in the process which—akin to his machine—is complete integration. The machine reveals an intimacy that we inherently share with reality, and the otherness that we sense is our own determination. Dufaux has reversed the obtrusive nature of the surveillance system to illustrate that, “We have a slice of reality that is bigger than we are thinking.” ■

Pascal Dufaux’s Le Cosmos dans Lequel Nous Sommes and many other works surrounding the concept of public surveillance and freedom will be exhibited in the Underground City until March 15. Look here for more information.