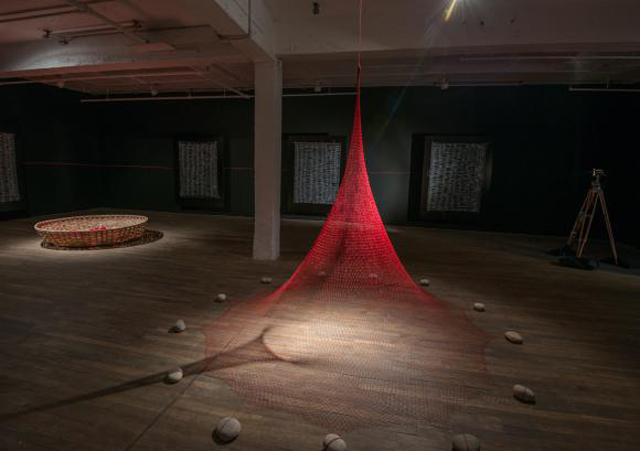 Nadia Myre has had a big year. Between travelling to Senegal and Mexico as part of her artistic practice, mounting a solo show at Montreal’s Oboro gallery, contributing work to several group shows including the 2014 Shanghai Biennale and topping it all off by winning the $50,000 Sobey Art Prize for 2014, the Montreal-based interdisciplinary artist has been catching the attention of people around the world, and with good reason.

For those unfamiliar with her work, Myre is an Algonquin member of the Kitigan Zibi Anishinabeg First Nation. Her art deals directly with Canada’s colonial past and present, and the legacy of pain that has been the burden of First Nations individuals, families and communities across the Americas for generations. She uses craft techniques like beadwork, needlepoint and net-making to create visually compelling works with a strong political message. Many of her projects have involved the participation of dozens or even hundreds of people who have lent their handiwork or testimonies to the creation of the works.

Now back in Montreal and planning her next project, Myre will be honoured on Thursday, March 19 with a tribute at the 30th anniversary celebration for CIAC (Centre International d’Art Contemporain de Montreal), happening at the Darling Foundry. A special group exhibit onsite will display Myre’s 2010 piece “The Circle” from her 2010 Scarscapes project, among works by over 30 other artists (on view until March 21).

Not one to rest for very long, Myre will be appearing at Friday’s YES Montreal Artists Conference as the keynote speaker. She took some time out of her busy schedule to speak with me over the phone about her work ahead of this week’s line-up of special events.

“I’m really open to teaching and learning,” she tells me, recalling her recent residency in Mashteuiatsh (an Innu reserve in the Saguenay region) where she learned how to make nets and tools. Several of Myre’s recent works have used nets extensively, including her recent solo show at Oboro. Net-making, she discovered, involves a vocabulary all its own, giving those who know the language of knots and rope the ability to communicate and establish common ground in localities across the world, wherever people harvest their food from the sea.

“When I got [to Senegal] and was right on the ocean, the minute I started to do some netting outside, everybody started to stop by to show me how they did theirs, the different strokes involved, or how quick they are, how they can do it with their eyes closed or with no tools.”

One of the byproducts of creating handiwork, whether nets for catching fish, quilts for keeping warm or needlepoint and beadwork for decoration, is the opportunity the long, slow process offers us to think and reflect (if by oneself) or to talk and exchange ideas and stories in groups. In this way, the process of creation becomes a vehicle for facilitating personal and communal development. These exchanges, especially when they include participants from diverse perspectives, can lead to greater empathy and understanding among people — an essential outcome if we’re committed to healing the broken relationships between Indigenous and settler communities in Canada and beyond.

This transformative potential is part of what makes Nadia Myre’s work so important. Recalling her 2002 work “Indian Act” (for which she and hundreds of recruited participants used tiny white and red beads to cover over the 56 pages of Canada’s Indian Act), she tells me that she opened the call to people of both native and settler origins so that “people could all come together in an act of coalition and come to a similar understanding that these ideas, so oppressive to native people, can be healed and that other people who aren’t necessarily native could work towards healing what’s happened.”

The artwork for which Myre won the 2014 Sobey Prize is called For those who cannot speak: the land, the water, the animals and the future generations, a title inspired from a 2013 declaration made on Parliament Hill by a group of Algonquin women elders. The work, a long beaded belt resembling the two-row wampum, was represented in Ottawa’s national gallery by a 23-metre long photograph, blown up to show the detail of the finely beaded handiwork.

Myre is among a generation of aboriginal people in Canada, including contemporaries like Tanya Tagaq, A Tribe Called Red and activists within the Idle No More movement, whose work is leading to far greater levels of public consciousness about the lives of indigenous people in this country in recent years. Myre notes that though the general public’s openness to listening to aboriginal people may be a relatively new development, the creativity expressed by members of Canada’s First Nations is as old as the tribes themselves, and just as resilient, even in the face of genocide.

“A lot of people still hold onto this false idea that aboriginal people are a lost race, are disappeared and vanished and all of these things, but the truth is we’ve always been interchanging, collaborating, mixing and mingling and changing ideas from one place to another, across the continent, and even across North and South America.”

For Myre, creating artwork is a way to present ideas that connect with viewers in a more powerful way than simple text. “Art is a really good vehicle for ideas to be able to exist in people’s imaginations in a way that words alone might not necessarily do. If you think about art without looking at the piece, it’s like thinking in abstraction in a way, but with the art it becomes a very powerful image. I definitely feel that artists have a power to communicate these things and I’m just privileged that people listen to what I have to say.” ■

Nadia Myre is being honoured at the 30th Anniversary gala for CIAC, held at the Darling Foundry (745 Ottawa) tonight, Thursday, March 19, free entry from 8 p.m. to midnight.