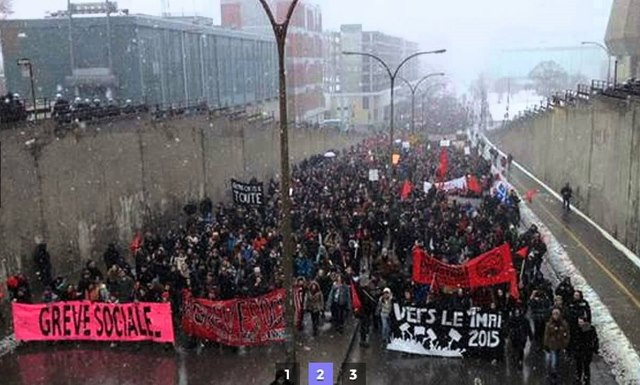 On Tuesday and Wednesday, thousands of Montreal students gathered together at events they hope will help inspire their fellow youth. “Every young person has the power to change the world,” they were told.

“We believe in supporting this potential by educating today’s students about the greatest local and global issues of our time. We believe in bringing a generation together by proving that no one is alone in their desire for change. We believe in celebrating the actions of young people and inspiring them to redefine what is possible.”

Woah. What? We’re not talking about the student protests are we?

Of course not, because the message that Dallaire and others were delivering as part of “We Day” activities at Théâtre St-Denis were aimed at convincing youth that change is possible and that it’s worth fighting for. Created by the Free the Children, the organization founded by Craig Kielburger, the group’s stated mission:

“To empower a generation to shift the world from ‘me’ to ‘we’ — from a focus on the individual to the power of community.”

“…With a focus on education and empowerment in our local and global communities, we are pushing the boundaries of charity and revolutionizing how we make change. Through Free the Children’s holistic model of international development, Me to We’s message of socially conscious consumerism, and We Day’s annual celebration of the power of youth to create a better world, our platform is dedicated to supporting young people everywhere as they fulfill their potential as active citizens.”

Outside Théâtre St-Denis, however, the World had a whole different message for Quebec’s “active citizens” mobilizing for change:

As new Quebec student mobilization started up this week, a “social strike” principally in protest over massive austerity measures proposed by the Couillard Liberal government, it didn’t take long for Montreal police services to dust off the bad habits that they had been so roundly criticized for during the last student protests in the spring of 2012.

From the start, police actions have been marked by provocation — marching straight into peaceful crowds — and the enforcement of a by-law, P-6, whose main purpose is to make mass arrests whenever the police deem it convenient.

Despite being forced to withdraw thousands of tickets issued under P-6 during the Maple Spring because a judge found both the by-law and its application were flawed, SPVM officers, under the marching orders of Mayor Denis Coderre, ploughed their way through student protesters (video) in the search for anyone wearing a mask (a clear attempt to rile the crowd). They then followed up with another P-6 trick, declaring the protest to be illegal because organizers had not filed an itinerary with police.

No matter how much Coderre or police might want to dress up the P-6 requirement for an itinerary as a public safety measure, it’s a rule that is conveniently ignored until police decide to use it to break up a demonstration. It is first and foremost an instrument of control, which is why protest organizers have systematically ignored it. In the more than 100 nightly protests held during the Maple Spring, police saw fit to ignore the by-law violation for more than 1,000 kilometres of peaceful downtown marches. Use of P-6 only amplified once the Charest Liberal government attempted to crack down on student protests, a tactic clearly aimed at repressing a movement that had grown too powerful and was making the powers-that-be nervous.

Charest’s Liberal successor, Premier Philippe Couillard, seems to have learned that lesson and, with the cooperation of Coderre and the SPVM, and police in Quebec City as well (274 arrests Monday night alone), is playing hardball from the outset. This is not an effort to restore order but to provoke a reaction so that the state can use repression to stifle dissenting voices.

Detractors of the 2012 student protest movement, which centred mainly around the threat of a tuition fee increase, liked to paint the protesters as spoiled and self-interested. That despite the fact that few of the demonstrators would be significantly affected by the tuition increases, which were scheduled to be phased in incrementally over five years. Most student activists saw the fight over tuition as an issue of accessibility for students from lower income backgrounds, the traditional viewpoint of not only the Quebec student movement, but of successive Quebec governments going back to the Lesage Liberals, which drafted the framework for the tuition-free college system in part to address the issue of accessibility. The recognition of the role tuition plays in discouraging access to higher education even filtered through to the conservative Union Nationale government that followed — and which instituted the tuition-free CÉGEP system in 1967.

Even the fiercest opponents of the 2015 strike movement, on the other hand, will be hard-pressed to paint activists as acting in their own self-interest this time given that neo-liberal politicians love to say they’re cutting the purse strings primarily for the benefit of future generations. This strike movement is largely in support of public workers — ironically including the SPVM — and the struggling users of the health and welfare systems who will be hurt by many of the proposed changes.

So the detraction game has shifted, with a mainstream media blinkered by a deeply entrenched anti-student bias attacking a “nebulous” movement, posing openly biased and sarcastic rhetorical questions such as, “Do they want the government to retreat and go back to mindlessly running deficits?”

They might better have asked if students want a government bent on “mindlessly reforming key social institutions without adequate studies, planning or consultation with workers or users?”

“Our youth are not (acting) to protect their own interests. They do this for us, on our behalf, the majority of the population. To avoid seeing us trapped by the government in the role of a silent majority. A government that knows that our awakening would endanger the interests of white-collar criminals and the ruling elite.”

No, that wasn’t Roméo Dallaire. It was Québec solidaire MNA Amir Khadir, one of the handful of Quebec politicians who has no trouble seeing that an anti-austerity platform is far from “nebulous” and who knows protesting students aren’t naive about what their social strike can accomplish, they are instead all too aware of what will happen if they sit back and do nothing. ■