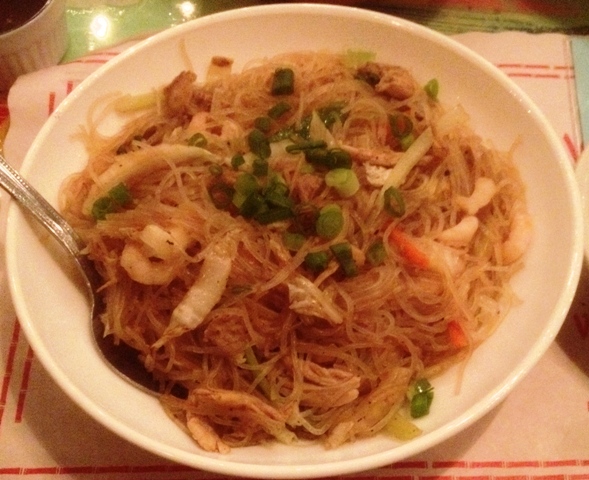 If Montrealers wanted to sample some of the city’s best Filipino cuisine before the summer of 2014, they’d probably find themselves bound for the restaurants and bakeries clustered around Plamondon metro in Côte-des-Neiges. Now Filipino food can enjoy that much more of the limelight since the DJ brothers Toddy and JoJo Flores have opened the culinary satellite Junior in Griffintown, serving up the sweet, salty and sour flavours of the Pacific archipelago.

Walking in for a late Sunday dinner with a couple of friends, I first noticed how much the small restaurant felt modelled after carinderia eateries you’d find in the open-air markets of Manila, from its corrugated metal awning over the cash and regional vintage signage collaged on the walls and tables, to the sweet and pungent smells of coconut and vinegar wafting in from the kitchen. While its appearance gave the initial impression of an in-and-out style of restaurant, the tables were packed with groups settled in for long meals. Just as I started to wonder whether we should have reserved in advance, a waiter was quick to greet and seat us and gave us a run-down of what we could anticipate in terms of taste.

“Ever try Filipino food before?” he asked. No, some of us hadn’t. Filipino food, he explained, is composed of Malay, Chinese and Spanish influences on cooking and seasoning methods and normally includes a selection of meat, noodle and vegetable-based dishes to share. Saying the waiter was helpful wouldn’t do him justice.

We ordered pints of Ghost Farm’s oatmeal pale ale and Jeepney house pilsner, and started on our appetizers, or pulutan. First up was the buto-buto, a plate of honeyed spare ribs ($9). Sprinkled with scallions and chilli flakes, the meat was a hodgepodge of bite-sized, tender cuts with succulent tastes of honey, soy and garlic going down to the bone. We paired the ribs with lechon kawali ($11), slices of pork belly that were texturally delicious, crispy on the outside and fatty on the inside. The pork belly came surprisingly unseasoned, which led our helpful waiter to point out the delicious tabletop sauces that added the signature Filipino flavour of vinegar to our starters: The Mang Tomas is a general crowd-pleasing mix of cane sugar, vinegar and breadcrumbs with a consistency and sweetness similar to molasses, but those of you looking for something that pops and fizzles on the tongue should go with the Suka Pinakurat. It’s a fermented coconut vinegar that was packed with chilli, garlic, onion and ginger, and we found ourselves going through several ramekins of the stuff while asking where we could get bottles for fridges back home (see: Plamondon).

We decided to take the waiter’s suggestions when it came to the main courses. For the meat course, he insisted on the adobo, a traditional Filipino dish that Junior offers with either chicken or pork. Having had our fill of pig for the moment, the chicken option ($13) melted in the mouth — this was skin-on dark meat braised in a coconut milk-based sauce, zested with ginger, lemongrass, a touch of fish sauce and hints of nutmeg. Served with a side of basmati rice and saturated with flavour, top marks went to this Spanish-style dish.

Next, the waiter brought us pancit bihon, a mound of rice noodles sautéed with shrimp, chicken and veggies, served with fish sauce and a wedge of lime ($11). The pancit was the best embodiment of straightforward street food for the night, with the noodles tasting of a slight dash of soy sauce. With added fish sauce and lime juice, its blend of chopped fennel, carrot, snow peas and chicken made for a juicy bite. Tiny Oregon pink shrimps were the only letdown in this dish, having been fried down to a point that were almost dry. 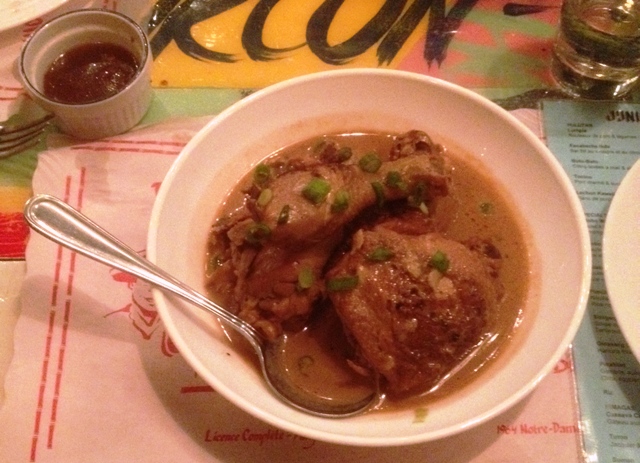 Lastly, for our vegetables, we had the ginasang sitaw, a colourful plate of long beans and pork, fried in garlic ($9). The pork was minced atop the beans alongside diced red pepper and translucent red onion. As advertised, the flavour of garlic ran throughout without being too overpowering. My only misgiving was that the beans might have been cooked a bit too long, as some were intermittently chewy without much juice left. While not as refreshing as I’d hoped, the waiter was right: Rather than picking at individual plates, having a mix of meat, noodle and vegetable dishes on the table made for an enjoyable and well-rounded splay of food.

It was hard to avoid dessert, or himagas, and we opted to try the two Chinese-influenced selections that Junior had the menu. First up was the glutinous cassava cake ($6), which is traditionally eaten during the Christmas season. Resembling rice pudding, its mix of tapioca flour and coconut milk made for a soft and pleasingly chewy treat. I had to hold back from ordering another slice. The other dessert, the turon, is a popular street food in the Philippines that’s an interesting take on the spring roll ($7). With thinly-sliced plantain and fragrant jackfruit wrapped in a crisp casing, it was both starchy and slightly sweet, with its side serving of thin caramel sauce giving a bite an additional sugary kick.

Overall, the food has plenty of soul to it. Given the décor and the kinds of dishes they offer, the brothers Flores have created a space that gives the vibe of a street within a street, a great place to congregate in a group and try numerous dishes you might otherwise have not considered. As we left with full stomachs, our ever-so-helpful waiter mentioned that menu options can change from time to time as dishes are subtracted and added, so I’m down for another visit and another flavourful surprise.  ■