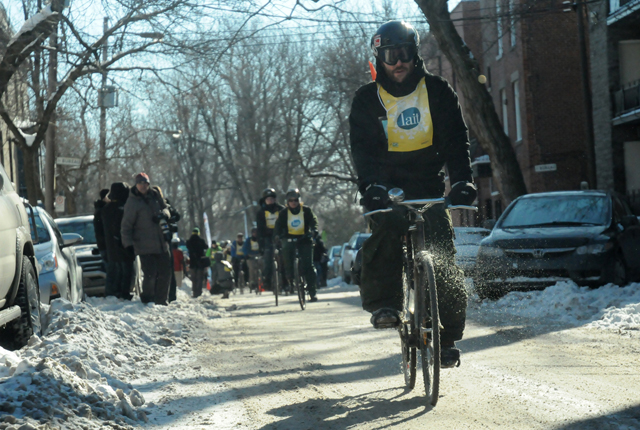 Montreal winters can turn the city into an obstacle course, from never ending snowstorms to deep freezes where it hurts to even leave the house. To a cyclist in the winter, these obstacles becomes challenges to accept, even pure enjoyment. The popularity of winter cycling keeps increasing each year, and many will be braving the cold at Parc LaFontaine on Feb. 15 for the second edition of Vélo sous zéro, organized by Vélo Québec.

“When we launched the first edition, within a week we had 500 people who registered to participate at the event. It was quite a blast,” said Joëlle Sévigny, Executive Director of Vélo Québec Événements. Vélo sous zéro was launched last year as part of the 30th anniversary festivities of the Tour de L’Ile. Sévigny continues, “This year we are expecting to double the participation (about 1,000 cyclists)”

The event is seen more as a gathering, in contrast to its summer counterpart, as the bike ride is a 15-kilometre course where the streets are not closed off and there is no participation fee.

For the experienced cyclist, 15km doesn’t seem like a big bike ride but Sévigny explains that it’s more about the experience. Vélo Québec wishes to keep the event on a small scale, however there are possibilities to increase the winter biking experience with further activities. “I think the experience itself of riding a bicycle in winter time is the main thing.”

For anyone new and unseasoned to winter cycling, the ride starts at 10 a.m. on a Sunday morning when there is little traffic on the streets the ride will take. “It’s the beginning of the day, you still have the time to do something else during the day. We want to keep it simple.” Says Sévigny. “It’s like a Sunday morning winter activity.”

“Our partners from the city of Montreal were concerned about the security last year, and now that it was such a success, and now more and more the authorities are taking bicycles in the wintertime more seriously.”

With networks such as Le Reseau Blanc (a guide to year round bike paths in the city) and cars adapting more to sharing the streets on a four season basis, there are fewer obstacles than ever for the Montreal winter cyclist to overcome, other than the crazy winter elements they deal with during each ride. ■

Check out these other links for more resources for winter cycling in Montreal:

8 winter bike hacks made for Montreal