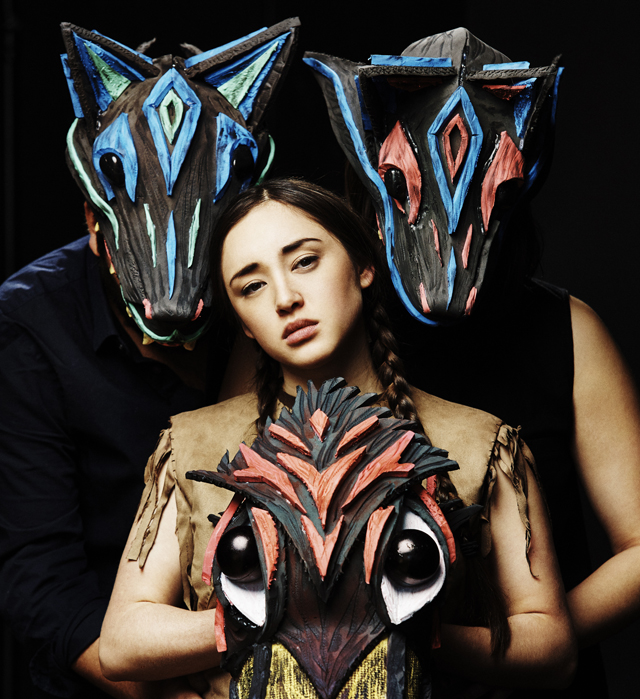 “They spoke of the Japanese Canadians in the way that the Nazis would have spoken about Jewish-Germans. When they spoke, I felt in that committee room the physical presence of evil.”

Diplomat Escott Reid was attending the Conference on Japanese Problems in January 1942 when he made this cutting observation. It was a high-level discussion in Ottawa that would kickstart tight restrictions on the lives of Japanese-Canadians. Eventually, wartime fear and long-held racist beliefs would lead to over 20,000 people being incarcerated, their possessions liquidated and jobs terminated. It’s this sombre chapter in Canada’s history that forms the backbone of The Nisei and the Narnauks, a new Persephone Productions puppet show written and directed by Paul Van Dyck.

We meet a young woman who will share the story of her grandmother, who was only a girl when the Canadians took away her father’s fishing licence and sent him away, far inland to the Slocan Valley. One day, the authorities come for Kimiko, our heroine.

Plunked down in a remote camp, Kimiko schemes to return to her own grandmother, who was too frail to be uprooted. She meets Raven, a narnauk, or spiritual figure from First Nations lore. Narnauks are shape shifters, and Raven “disguises” Kimiko as an aboriginal girl, and they set off.

“Kimiko is determined, strong-willed, compassionate, very caring — and tough! She’s a badass,” explains lead actress Stefanie Nakamura. Van Dyck likens his protagonist’s adventures to Alice in Wonderland, and it is indeed a very sweet tale of a girl and sidekick, helped and hindered along the way by various narnauks. The result is a cultural mash-up that blends the creation stories of the Haida Gwaii peoples with the wartime Japanese-Canadian experience.

Persephone’s mandate is to provide work opportunities for young performers, and sure enough, all four players came to the show with minimal exposure to puppetry. “It’s completely different from ‘people acting,’” explains Michael Briganti, who portrays Raven. “Because you’re basically putting all of yourself — your focus, your energy — into something that’s not breathing.”

“You have to be more calculated and precise,” adds Nakamura.

Despite little to no training, the performers all do a remarkable job with their many puppets, which were created by Montreal-based designer Zach Fraser. There’s a larger-than-life Ogopogo, delightful shrieking geese and Angry Bird-like newborn chicks to ogle. The show really warms up when a tiny, shifting mouse enters stage left.

Van Dyck was outraged to realize his school history lessons had omitted the racist treatment of the Japanese — his goal with Nisei is to share the story with younger generations. “I was always fascinated by the darker side of Canadian history. When I first heard about it, I couldn’t believe that this happened in Canada,” he explained. “We seem so multicultural and open and loving — but we’re not. We’ve done atrocious things based on racism, political gain and corruption.”

Nakamura, whose TV credits include a turn on Montreal-set cop drama 19-2, has a Japanese father and a Québécoise mother (her family was not yet in Canada by the War). “I’m happy to be part of a production that gives a voice to (the internees), because they didn’t get proper care after it happened,” she says. “They deserve to be heard.”

Brefny Caribou and Jimmy Blais, who play most of the narnauks, have Cree heritage. “History is written by the winner. That’s definitely the case in both of these cultures that we dealt with,” says Blais, who has a recurring role on Mohawk Girls,the APTN series shot in Kahnawake.

“Even as an Indigenous person, it was exciting to learn something new about the different peoples of this land,” adds Brefny (whose vocals and accompanying guitar are show highlights, by the way).

Though the tone can get a touch too lecture-like at times, The Nisei and the Narnauks is a colourful, delightful play that doesn’t sugar coat this part of Canada’s ugly history, but still manages to make the story palatable and fun for both children and adults. ■