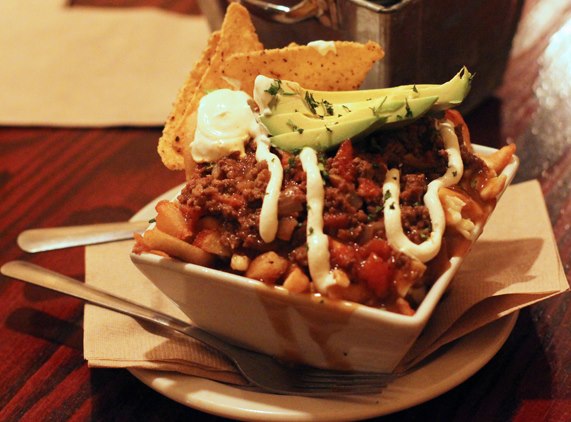 The Taco Poutine from Frites Alors!

Poutine Week in Montreal began on Sunday and runs through Saturday, Feb. 7 at 43 locations across town. Read our team’s reviews of 11 very different variations on Quebec’s national dish:

This bistro just south of Plaza St-Hubert usually does Asian twists on classic comfort food, but their Poutine Week entry is a take on In-n-Out burger’s infamous Animal Style fries, a secret off-menu item that essentially pairs fries with burger toppings. La Bêtise substitutes In-n-Out’s processed American cheese with curds, but otherwise replicates their rémoulade-ish secret sauce, fried onions and ground beef. The sauce is thick and sweet (owing, most likely, to the presence of chopped-up sweet pickles) — so sweet that it grows overpowering way before you’ve made a dent in the dish. It has that same syrupy tang that Halifax-style donair sauce has: interesting at first, but too heavy and too sweet to sustain an entire dish. The In-n-Out burger sauce is usually slathered on a relatively small burger, but over a sizable bowl of fries, it overstays its welcome. (Alex Rose)

Gravy can make or break a poutine, and this was one of the strengths of Brouhaha’s Faim de Loup Poutine, which tasted better each bite. The pulled lamb was well seasoned and the fries were perfectly crispy, but it was their duck sauce — thicker than most poutine gravies I’ve had — that truly brought the dish together in poutine harmony, complementing the lamb, caramelized onions and cheese curds, not to mention Brouhaha’s great selection of craft beers. (Cindy Lopez)

In addition to reaching over the table to paw at my dining companion’s official poutine week entry at Brouhaha, I ordered for myself one of their evergreen menu options: the Poutiflette. It’s a portmanteau that combines poutine, natch, and the tartiflette, which could be considered the French potato, cheese and pork equivalent of a pot pie. True to its name, both dishes figure prominently in the mash-up. There were fries, smothered in thick, creamy brown gravy. They were topped with pork lardons — wee fatty pork cubes — and an avalanche of different cheeses (brie-esque, curds etc.) melted together. It was lighter and less chaotic than expected. It was tremendous, and a regular menu item as well. (Erik Leijon)

This Mile End café is known for using donut dough in place of potatoes in their poutine, but this year they’ve also added Russian and (kind of) Latin American accents to the dish. The Vladimir Végétarienovich is topped with chili, beets and a dollop of sour cream, retaining only one element of the traditional pout: cheese curds. At the sight of my plate, someone in the restaurant called the dish outrageous, and it is, but it also hangs together really well. Ask for a hot sauce if you like your chili spicy, and arrive hungry because those donut fries are filling as fuck. (Lorraine Carpenter)

This quaint mini-chain restaurant serves an all-vegan poutine made with house-baked fries and Daiya mozzarella, all bathing in a savoury miso-based Portobello and cremini mushroom sauce. Maybe we’re just traditionalists at heart but the stringy vegan cheese left us wanting something more curd-ish. BONUS: All the ingredients served at Copper Branch are locally sourced and 100 per cent plant-based. (Jessica Sammut)

Widely known for their mouth-watering gourmet hot dogs, Dirty Dogs has recently ventured into the poutine business. For the 2015 edition of Montreal’s Poutine Week, chef Kevin crafted a mutant poutine from one of their most popular hot dogs. The Boss is a delicious mash-up of hand-cut fries, chopped onions, Dirty Dogs mustard, coleslaw, orange cheddar and Dr. Pepper chili. What makes this monster special? Hands down, it’s the homemade Dr. Pepper chili, a perfect salty/sweet complement to the crisp fries. Available in two sizes, we recommend you order big, like a boss. And in case you’re craving a late-night poutine, DD delivers until 4 a.m. on Fridays and Saturdays. (JS)

Poutine Week drew me to a neighbourhood I rarely have occasion to visit: Outremont. While the champagne brunch crowd wrapped up their Sunday feasting, I ordered  the Poutine Enfants Terribles. Now I love a massive pout, and I could’ve eaten more but I was grateful that this wasn’t some family-size shit — the portion was kind of perfect, actually. The porcini mushroom gravy was amazing, the St-Guillaume cheese and smoked lard were unbelievable, and though I don’t usually go for skinny fries in a poutine, these juliennes really worked. (Leif Nielsen)

Mile End’s brunch hotspot was lined up down the block when I tried to sample their Poutine Week offering on the weekend, but I slipped in easily during my second attempt on a weekday morning. Fabergé’s poutine is a duck-meat specialty built on a foundation of fresh, fluffy waffles, with the requisite squeaky cheese curds and a mildly spicy slaw on the side. With a generous portion of tender duck in plenty of flavourful gravy and three big waffle wedges, this breakfast poutine will keep you fuelled all day long. (Lisa Sproull)

I’m a sucker for avocado, so hearing that Frites Alors’s Taco Poutine would make use of those little green fatties was enough to get me in the door. My order was dressed with a perfectly ripe half-avocado to go along with the seasoned ground beef, cheese curds, habanero sauce and sour cream that topped the Frites signature fries. The Taco Poutine was the winner among several special poutines that pitted different Frites Alors locations against each other in a friendly competition in the lead-up to Poutine Week, proving that adding avocados is the secret to winning at life. (LS)

This Petite-Patrie poutinemonger already offers a nearly endless selection of custom poutines, so they’ve had to pull out all the stops with their Poutine Week offering: the Sugar Shack. It offers a helping of their signature “smashed” potatoes (which actually sit somewhere between French fries and home fries), curds and gravy with an assortment of traditional cabane à sucre fixins’: ham, an omelette, baked beans (served separately) and a strip of tempura-battered bacon (!) served on a pancake doused in maple syrup. The poutine’s precarious stacking (ostensibly so that everything can fit on the pancake) means the sauce doesn’t necessarily get distributed evenly, but that’s about the only mark against this entry. The elements are delicious, the portion is sizable without being absurd and, at $10, it’s one of the more affordable options of both Poutineville and Poutine Week. That cup of beans, though — might as well go all out and toss it on the poutine. The idea of a side dish to this already extravagant poutine is too much to bear. (AR)

For our first Poutine Week adventure, my companions and I wanted to try something a bit different from the typical late-night carbfest, so we chose Rosalie, a respectable downtown establishment with a proper wine list. We went in blind, not knowing what sort of poutine they’d developed. What we discovered was a wonderfully executed Southern BBQ style dish with creamy corn and smoky bacon over crispy fries and cheddar curds, topped off with a couple of very tender boneless ribs. A sweet and kicky BBQ sauce holds it all together, making the Southern Drool a poutine that lives up to its name! (LS)

My experience with fish and fries is limited to the traditional fish ‘n’ chips, but la Taverne F has taken that pairing a little further, fusing the strengths of Portuguese cuisine (seafood and potatoes) with the poutine creation. It was my first time dining in the heart of the Quartier des Spectacles, and I enjoyed the atmosphere. I also loved the presentation: the Salted Cod Ferreira Poutine was served in a little cast iron skillet. The fish was nice and flaky, the potatoes were well-seasoned and the lemon zest was also present in each bite, creating a good balance with the creamy sauce and caramelized onions. I felt that the dish was little heavy on cheese curds, which took away from the cod, but overall, it was a fresh new take on both fish and poutine experiences. (CL)