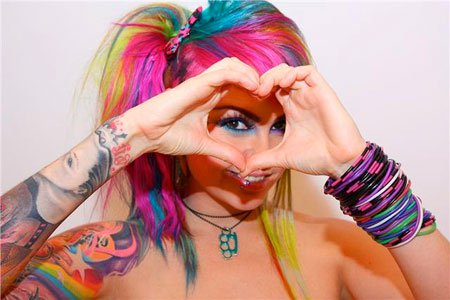 Production-wise, Montreal — or Canada, for that matter — isn’t even in the same galaxy as a city like L.A.. It’s like comparing Michael Jordan to a quadriplegic baby. But hey, shake what ya momma gave ya, right?

Some thrive, not all survive.

Vandal Vyxen
Famous for… superhuman ejaculatory powers — she is the uncontested squirt queen of Quebec. See her in… 3 Dudes Get Their Asses Attacked and Quebec’s Kinky Lesbians.

The Lane Sisters, aka Shana and Roxy Lane
Famous for… being real sisters who perform together. They’ve also worked with French (as in France) director Marc Dorcel, which is a pretty big deal. See them in… Course de Pitounes and Camping X Treme.

Judy Star (1982–2010?)
Famous for… her mysterious death. Star, born in 1982, may or may not have committed suicide in 2010. A prolific performer, she’s featured in 130 scenes and worked for some of the biggest studios around: Hustler, Zero Tolerance, New Sensations, Evil Angel and 3rd Degree to name a few. In that time she was allegedly quarantined by an HIV scare that shook the industry (unverified).

Lara Roxx
Known for… contracting HIV in 2004 while shooting a scene with Darren James. She is the titular star of the documentary Inside Lara Roxx by director Mia Donovan.

Patricia Petite (inactive/retired)
Known for… her constantly changing hair colour and spotty English. Current information is scant, unlike her CV — Red Light District, 3rd Degree and Anabolic are just a few of the powerhouse studio she’s worked with.

Please be careful out there.

But we’re not supposed to contrast pandemic fatalities because Quebec counts differently.