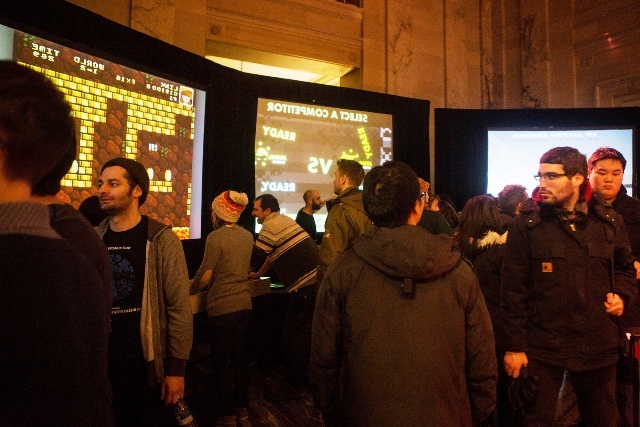 Winter break (didn’t it used to be spring break?) is fast approaching for the youngsters, which means it’s time once again for Montreal Joue, the totally free annual gaming festival organized by our local libraries.

There are over 200 activities from this Saturday till March 8, but this year they’ve whittled down a few big ones into their Grand événements series.

This year’s edition starts with a bang. On Saturday, Feb 21, from 4 p.m. to midnight, head over to the SAT to try out the latest local indie games in-development. Thirty participants are expected, from the big name Minority Media (makers of a new VR time travelling game) and Sauropod (of Castle Story fame) to lesser knowns.

Montreal Joue is going all-out on Nuit Blanche, with six different spots for gaming, including an outdoor oasis in conjunction with Ubisoft on little Emery Street in Quartier-Latin. There’s going to be a giant screen, plenty of video and board games, and hopefully a spot to get warm. Elsewhere, Excentris will be hosting an arcade, and those power glove hoarding party starters Gros Joueurs are taking over la Vitrine culturelle.

On Feb. 25 and March 4, the McCord Museum, which currently has a toy exhibit, will be hosting nights celebrating retro gaming. Concordia prof Jonathan Lessard will be your guide on this nostalgic trip.

Head over to Cinémathèque Québécoise on March 2 at 6:30 p.m. for a screening of La revanche des jeux video, a documentary about the more practical and beneficial aspects of gaming.

Everyone’s favourite tuque-wearing wanderer Waldo (or Charlie, depending on whether you read the books in English or French) will be hiding in plain sight, as he does, in hot spots all over the city on March 3. It coincides with a series of gaming flash mobs that will be happening on that day.

Once again, Concordia’s TAG centre will be opening its doors atop the EV building to the general public for Arcade 11. Check out the experimental projects they’re working on from March 4-6.

If you happen to take the metro’s blue line throughout the festival, keep your eyes peeled at each stop for free gaming set-ups. You can even hashtag the experience (#20jeuxbleus) and win prizes.

Ever heard of Yukigassen? At the closing party on March 8 at Parc Olympique, you’ll finally have the opportunity to learn about, and then participate in, this Japanese sport, which is basically a snowball fight with rules. ■

These highlights barely cover the sheer number of video and board gaming events Montreal Joue has planned this year. For all the date/time details, go to Montreal Joue’s website