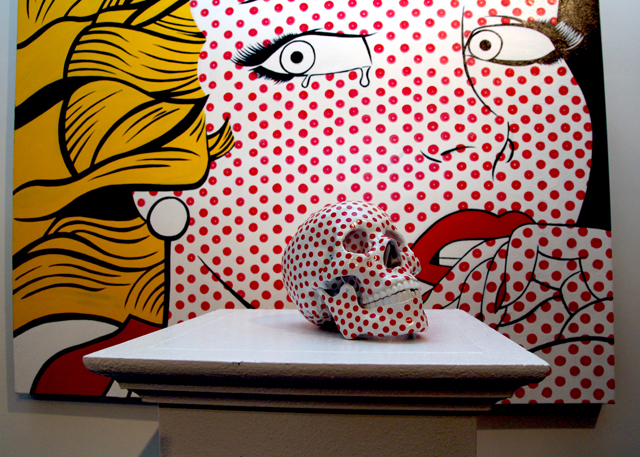 In the heart of the Plateau Mont-Royal stands a former hardware store that’s slated for demolition, in order to make way for new condos. It’s a common enough occurrence these days, and wouldn’t be remarkable at all if it weren’t for one thing: For the remainder of its life, the two-storey grey-brick building will become a unique ephemeral art gallery — a space that will not only display works of art, but that has also become a work of art itself.

The concept is an experiment by the architecture firm idiphi, who for the past several months have been working at the site, salvaging raw materials like floors and beams to be repurposed as furniture or to build new decorative walls (both by Max Wood), and redesigning the interior to fit their vision for a new creative arena. In the process, the building itself has been sculpted into a custom space perfect for showcasing a series of art exhibits, while also being used as temporary office space for the firm. Self-referential installations dot the premises and peek out from walls and crawl spaces in surprising ways. The building’s centrepiece is a basement-to-attic-height tree that was brought to the site in four pieces before being reconstructed and painted pure white. Juxtaposed against the raw wood beams that form the adjacent wall, the tree is a nice nod to the origins of the building materials that make up the sites where we live, work and play.

Between now and the building’s planned demolition in a few months, the architects will invite a succession of artists to exhibit their work in the space. The first will be Emmanuel Laflamme, a multidisciplinary artist whose roots are in traditional cartoon animation. His work has been displayed in several group shows and has been featured at Fresh Paint Gallery as well in the streets during last summer’s Under Pressure Festival, but this exhibition will be his largest solo show to date, comprising almost 50 works.

For Laflamme, a self-taught artist who works across many different styles, this exhibit is a chance to show the connections that tie his highly varied works together. From paintings to prints to sculptures and installations, a common theme across Laflamme’s work is the use of familiar characters, logos and images, and remixing them in unexpected ways. In one painting called “Killing Time,” Goya’s soldiers assault one of Dali’s melting clocks. In another series called “Beauty Is in the Eye of the Beholder,” Keith Haring’s familiar dancing outline figures jump out from Marilyn Monroe’s face, rendered in Andy Warhol’s unmistakable silk-screen style.

“The idea was to take those paintings and pull them out of their context and give them a new meaning,” explains Laflamme.

He began his practice by throwing Photoshopped mash-ups of existing characters and imagery onto his DeviantArt page, just for fun between animation contracts. When one of his mash-ups, a remixed Banksy rat gnawing on a decapitated Mickey Mouse, went viral and was mistakenly attributed to Banksy himself, Laflamme felt validation on one hand,  his being suddenly so widely seen, but the erasure of his identity during the process led him to shift from Internet-based image mash-ups to rendering his ideas onto canvas and in the real world.

“I’m going for more complex ideas and more refined processes to express those ideas. Now I express them as complete artworks in their own right instead of Photoshop mash-ups.”

Laflamme uses the familiar to give the audience a jumping off point to engage with. “I want to express a specific idea or message, or comment on something, and to be understood. That’s why I use known or somewhat known images. We can all relate to those symbols. It’s easier to reach out to people because we’re talking a similar language.”

Creating new artworks out of pre-existing imagery has been around ever since Marcel Duchamp signed a urinal and called it art in 1917, and questions about copyright and fair use have been cropping up around appropriation art ever since (see: Girl Talk or Richard Prince for recent examples). Laflamme’s practice has been no stranger to concerns over copyright. He tells me that earlier plans to mount a solo show got scuttled when backers got nervous about copyright. Despite that setback, Laflamme is sure that appropriation art isn’t going anywhere. In fact, a piece at the centre of that controversy ended up opening doors for him when he was invited to create the work for Fresh Paint Gallery instead. Now, the piece with its mash-up of styles and time-periods from Manet to Lichtenstein takes its rightful place as the literal foundation of the ephemeral gallery space.

“We’re so surrounded by popular culture, it’s only natural for you to express yourself through it at some point,” Laflamme says. “When people enjoy a specific part of the culture so much, they want to appropriate it and express it in their own way. They want to make it their own and show that they have a relationship with this character. Then, other people can bond with it as well.” ■

The idiphi ephemeral gallery is located at 4517 Christophe-Colombe and will open officially to the public on Wednesday, March 4. The gallery will be open from Wednesday to Friday, 2–8 p.m. and Saturday to Sunday from 11 a.m.–5 p.m.