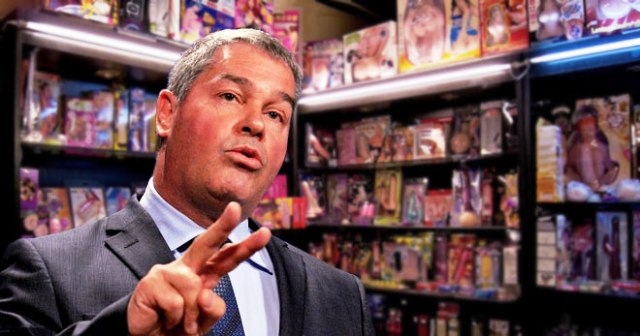 Our political leaders these days are mostly idiots, it seems. You can’t open your paper or check your Twitter feed without hearing some outrageous tripe from people who are supposedly in charge of leading this province, nation or world into the 21st century.

Take Quebec education minister Yves Bolduc, who once more proved that education is no guarantee of intelligence, defending one Quebec City school’s decision to force a student to remove her clothing so they could search for pot. The strip-search is okay, he said, as long as it’s done in “a respectful fashion.”

Maybe the minister has spent too many years casually walking into rooms where people are mostly naked (I’m not saying he parties with Dominique Strauss-Kahn, just that he’s an MD), but it’s hard to see how removing your clothes in front of your principal or teachers can be done without sacrificing your dignity. But let’s try.

Okay, this is going to be a little painful, but please try to imagine a buck-naked Bolduc hiding behind a curtain as Premier Philippe Couillard and Coalition Avenir Quebec leader François Legault check for the $215,000 in bonus money he picked up when he signed up 1,500 new patients that he would once more abandon 18 months later. Does he look dignified? (No, smug doesn’t count.)

Then there’s Inspector Legault, who this week called for an inquiry into the application for a permit to run any new house of worship to make sure they won’t be preaching things that run counter to the Quebec Charter of Rights. But since freedom of expression and freedom of religion are in the charter, doesn’t that mean that Legault himself is advocating anti-charter practices? Can we shut down his church, too?

Of course, Legault doesn’t mean we should inspect churches. Well, yes, the fact that the Catholic church doesn’t allow women to serve as priests might be considered a violation of sexual-equality provisions, but let’s not worry about that when we have these dangerous cults that think men should always cover their heads in public.

Oops, did I say men? I didn’t mean to refer to Sikhs or to Jews, of course. When men do these things, it’s because they freely choose to do it. When women do it, it’s because they are oppressed. Like all those women who put on warpaint to buy groceries or who wear skirts with leggings when it’s -59C. What religion was that again? The Beauty Cult? How oppressive.

Moving on to Ottawa, the home of the nation’s most pervasive terrorists: the Harper Conservatives.

Look, I have just as much right as all the other idiots out there to label anyone I don’t like as a potential terrorist. But I really like this observation by Christopher Majka in an excellent article he wrote for Rabble.ca on Tuesday:

“The tactical point of terrorism is to terrorize. People who are terrorized cease to think rationally. They are terrified. Terrified people are readily manipulated. Terrifying things tend to provoke strong reactions — frequently over-reactions. That is the point.”

So who, exactly, is trying to scare us into surrendering our liberties and our privacy in an insanely expensive battle against a threat that our current laws and policing practices have thus far worked pretty effectively to prevent?

Yes, it’s Prime Minister Stephen Harper, who is himself terrorized at the prospect that Canadians might not give him another five years to continue dismantling the things that make us Canadian. Like CBC/Radio-Canada, which Harper identified this week as a viper’s nest of people opposed to Conservative values. As opposed to Quebecers, who love them so much that we elected 54 MPs in the last election! Oh, wait, that was the NDP. We only elected five Tories, but as Harper suggests, that doesn’t make us lefties.

No, as Harper says, we believe in Tory values like law and order, which apparently they define somewhat differently than the Supreme Court, which has ruled against the government in at least seven major cases in the last four years. We also believe in gun control and we oppose unfettered tar sands development, the Energy East pipeline, Nickelback and Pierre Poilievre (who, if he wants to become PM, needs to learn to pronounce his own name properly).

In fact, the terror issue is the only thing the Tories really have going for them here because lots of Quebecers seem to enjoy being afraid of things that there’s no reason to fear, like turning right on red lights or running a budget deficit when interest rates are low and the economy needs a boost.

But let’s get back to terrorism, which another idiot, federal Justice Minister Peter Mackay, has trouble defining properly. When police broke up a plot by three people who were allegedly planning a mass murder at a shopping mall on Valentine’s Day, he told reporters it was not linked to terrorism.

“What I can tell you is that this appeared to be a group of murderous misfits that were coming here or were living here and prepared to wreak havoc and mayhem on our community.” Hmm. Sounds like terrorism to me.

But it wasn’t terrorism because I guess they didn’t plan on scaring anyone. If they had, they’d have adopted Muslim names and worshipped Allah rather than neo-Nazis and white supremacists.

Meanwhile, here in Quebec, people like Legault want to greet requests to open a mosque with an ideological strip search. Why? Because half a world away, an ideological army is waging war on its fellow Muslims in Iraq and Syria, murdering hundreds of thousands of “apostates” in a bid to create an Islamic homeland. Yes, the Islamic State (or ISIS) is a threat, but it’s much more of a threat to Canadian Muslims and their families and friends abroad than it is to lapsed Catholics in Shawinigan.

ISIS wants Muslims around the world to feel like they are unwelcome anywhere else. People like Harper and Legault and MacKay and Bernard Drainville play right into that with their own brand of fear-mongering and suspicion.

We can’t let the terrorists win. Let’s vote these idiots out of office. ■